Zelensky calls on West to warn Russian to spare dam

Zelensky calls on West to warn Russian to spare dam 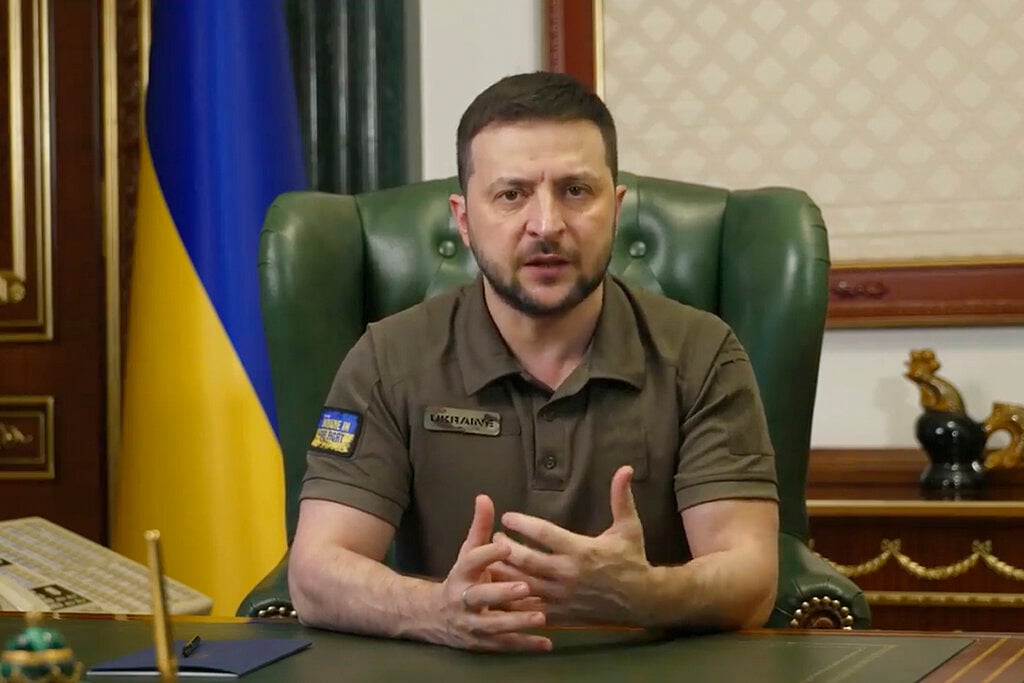 BASHTANKA: Ukrainian president Volodymyr Zelensky called on the West to warn Russia not to blow up a huge dam that would flood a swath of southern Ukraine, as his forces prepare to push Moscow’s troops from Kherson in one of the war’s most important battles.

In a television address, Zelensky said Russian forces had planted explosives inside the huge Nova Kakhovka dam, which holds back an enormous reservoir that dominates much of southern Ukraine, and were planning to blow it up to cover their retreat.

“Now everyone in the world must act powerfully and quickly to prevent a new Russian terrorist attack. Destroying the dam would mean a large-scale disaster,” he said.

Russia accused Kyiv earlier this week of planning to rocket the dam. Sergei Surovikin, commander of Russian forces in Ukraine, said Ukrainian forces had already used US-supplied Himars missiles against it in what Ukrainian officials called a sign Moscow could be planning to blow it up and blame Kyiv.

Neither side produced evidence to back up their allegations.

The vast Dnipro bisects Ukraine and is several kilometres wide in places. Bursting the dam could send a wall of water flooding settlements below it, including much of the city of Kherson, which Ukrainian forces hope to recapture in a major advance.

Damage to the dam would also wreck the system of canals that irrigates southern Ukraine, including Crimea, which Moscow seized in 2014.

Zelensky called on world leaders to make clear that blowing up the dam would be treated “exactly the same as the use of weapons of mass destruction”, with similar consequences to those threatened if Russia uses nuclear or chemical weapons.

One of the most important battles of the eight-month-old war is coming to a head near the dam as Ukrainian forces advance along the river’s west bank, aiming to recapture Kherson city and encircle thousands of Russian troops.

Ukraine has imposed an information blackout from the Kherson front, but Russian commander Surovikin said this week that the situation in Kherson was “already difficult” and Russia was “not ruling out difficult decisions” there.

The Kremlin today sidestepped a question about whether or not President Vladimir Putin had given an order for Russian forces to withdraw from Kherson, referring the question to the defence ministry.

Ukraine’s armed forces general staff said up to 2,000 newly-mobilised Russians had arrived in the region “to replenish losses and strengthen units on the contact line”.

Russian-installed occupation officials have begun what they say is the evacuation of tens of thousands of civilians across the river from towns on the west bank. They accused Kyiv of shelling a ferry, killing at least four civilians. Ukraine acknowledged an attack, but said it came after a civilian curfew.

On the Ukrainian-held side, the town of Bashtanka, located about 40km from the Kherson front, was alive with Ukrainian troops, many buying winter gear from outdoor stalls and a store hawking military clothing and equipment. The town bore the scars of Russian shelling that left some buildings in the centre gutted or damaged.

As Russian forces have faced setbacks on the battlefield since September, Putin has escalated the war. Last month he ordered the call-up of hundreds of thousands of reservists, announced the annexation of Russian-occupied territory and repeatedly threatened to use nuclear weapons to protect Russia.

This month, he began a campaign of attacks using cruise missiles and Iranian drones to knock out Ukraine’s power supply ahead of winter. Kyiv and the West say that amounts to deliberate targeting of civil infrastructure and a war crime.

Since yesterday, Ukrainians have experienced countrywide calls to reduce electricity consumption and some blackouts, which the authorities say are necessary to fix power stations damaged in the attacks.

The US said on Thursday that Iranian troops were in Crimea and had helped fly the drones to attack Ukraine.

“We can confirm that Russian military personnel based in Crimea have been piloting Iranian UAVs and using them to conduct kinetic strikes across Ukraine, including in strikes against Kyiv in recent days,” US state department spokesman Ned Price told a briefing.

Iran has denied supplying the drones, as has Moscow, although many have been shot down and recovered making their provenance clear.

“Iran and Russia, they can lie to the world, but they certainly can’t hide the facts, and the fact is this: Tehran is now directly engaged on the ground,” White House national security spokesman John Kirby said.

Ukrainian foreign minister Dmytro Kuleba said on Twitter he had held detailed discussions with Israeli prime minister Yair Lapid on a request for air and missile defence systems and technology.