Envoys from around the globe have gathered in the Egyptian seaside resort of Sharm El-Sheikh for talks on tackling climate change amid a multitude of competing crises, including the war in Ukraine, high inflation, food shortages and an energy crunch.

Negotiators spent a frantic two days ahead of the meeting discussing whether to formally consider the issue of loss and damage, or reparations, to vulnerable nations suffering from climate change.

The issue, which has weighed on the talks for years, was agreed just hours before the meeting officially opened.

In an opening speech, the head of the UN’s panel of climate scientists highlighted the urgency of cutting greenhouse gas emissions and adapting to the effects of global warming. 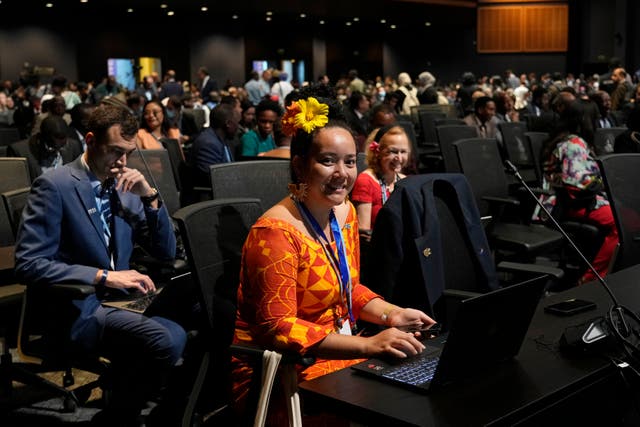 A delegate from the Cook Islands attends an opening session at the Cop27 UN Climate Summit in Sharm El-Sheikh, Egypt (Peter Dejong/AP)

“This is a once-in-a-generation opportunity to save our planet and our livelihoods,” said Hoesung Lee, chair of the Intergovernmental Panel on Climate Change.

The outgoing chair of the talks, Cop26 president Alok Sharma, said countries had made considerable progress at their last meeting in Glasgow, including on setting more ambitious targets for cutting emissions, finalising the rules of the 2015 Paris agreement and pledging to begin phasing out the use of coal – the most heavily polluting fossil fuel.

“We kept 1.5 degrees alive,” Mr Sharma said, referring to the most ambitious goal of the Paris pact, to keep temperature increase since pre-industrial times under that threshold.

Yet now those efforts were being “buffeted by global headwinds”, he warned.

“These crises have compounded existing climate vulnerabilities and the scarring effects of the pandemic.”

However even the most optimistic scenarios, assuming countries do everything they have pledged, put the world on course for 1.7C of warming, he warned.

“As challenging as our current moment is, inaction is myopic and can only defer climate catastrophe,” said Mr Sharma. 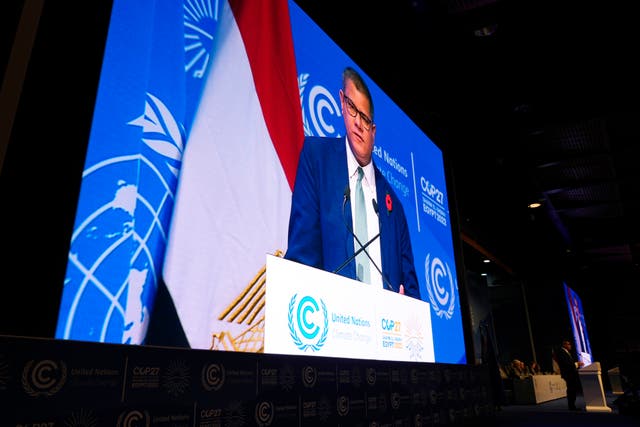 “We must find the ability to focus on more than one thing at once.”

“How many more wake-up calls do world leaders actually need?” he asked, citing recent devastating floods in Pakistan and Nigeria, and historic droughts in Europe, the United States and China.

His successor, Egyptian foreign minister Sameh Shoukry, said his office would “spare no effort” to achieve the goals of the Paris accord.

President Abdel Fattah el-Sissi wrote on Twitter that Egypt, as host country, was seeking to move from the “pledges phase” to “concrete measures on the ground”.

The UN’s top climate official also appealed to countries both to engage constructively in the negotiations and take the necessary action back home.

“Here in Sharm El-Sheikh, we have a duty to speed up our international efforts to turn words into action,” he said, adding that “every corner of human activity must align with our Paris commitment and pursue our efforts to limit temperature rise to 1.5 degrees”.

More than 40,000 participants have been registered for this year’s talks, reflecting the sense of urgency as major weather events around the world impact many people and cost billions of dollars in repairs.

Egypt said more than 120 world leaders will attend, many of them speaking at a high-level event on November 7-8, while US President Joe Biden was expected to arrive later in the week. 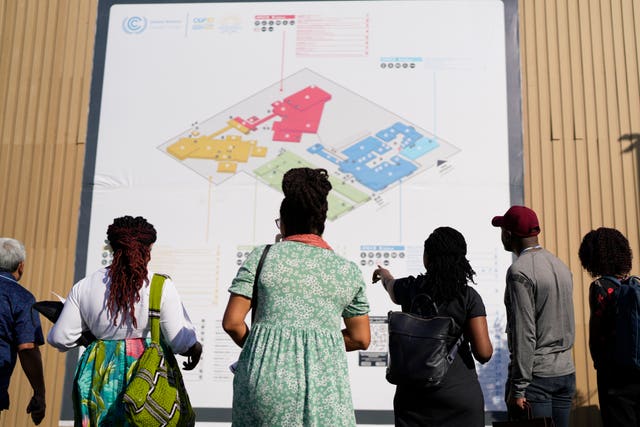 But many top figures including China’s President Xi Jinping and Prime Minister Narendra Modi of India were not planning to come, casting doubt on whether the talks in Egypt could result in any major deals to cut emissions without two of the world’s biggest polluters.

Rights groups criticised Egypt on Sunday for restricting protests and stepping up surveillance during the summit.

“It is becoming clear that Egypt’s government has no intention of easing its abusive security measures and allowing for free speech and assembly,” Adam Coogle, the group’s deputy director for the Middle East and North Africa, said in a statement.

Human Rights Watch said it had joined about 1,400 groups from around the world urging Egypt to lift the restrictions on civil society groups.

Alaa Abdel-Fattah, a prominent imprisoned pro-democracy activist from Egypt, escalated his hunger strike on Sunday in the first day of the Cop27, according to his family.

Concerned that he could die without water, she was calling for authorities to release him in response to local and international calls.