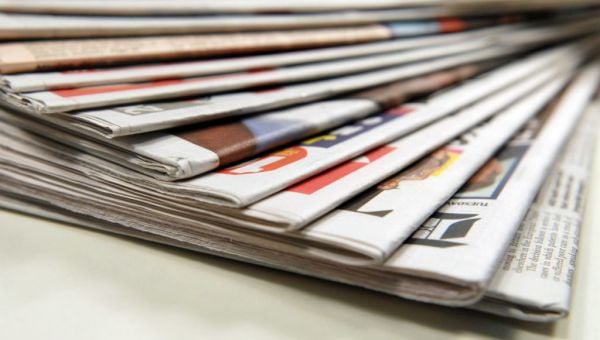 A report that has found 140 “lost” child mental health follow-up appointments, and the murder of a patient in a Cork hospital are among the stories on Monday’s front pages.

The Irish Examiner leads with a story on the murder of 89-year-old Matthew Healy in Mercy University Hospital (MUH).

The hospital murder is the lead story in The Echo, Irish Daily Star, Irish Sun and The Herald.

A shortage of home carers is contributing to the hospital beds crisis, the Irish Daily Mail reports.

For all the big news and sport, pick up a copy of Monday’s Irish Daily Mail, or click on https://t.co/wKUyK4AHpD pic.twitter.com/8lqjZX3WTi

In the North, the Belfast Telegraph leads with a story on short-term releases for convicted murderers in Northern Ireland.

The Irish News leads with a story on Archbishop Eamon Martin suggesting the church could help with the Troubles truth recovery process.

GAA-founded A5 group: We saw tragedy all around us

Troubles for the former UK chancellor, Boris Johnson in Kyiv and benefit dependency are splashed across the British front pages.

Tory MPs have warned Nadhim Zahawi’s position as Conservative Party chair is “untenable” due to questions over his tax affairs, reports The Independent.

Metro says Labour has asked for an investigation into the appointment of the BBC’s chairman amid claims he helped Mr Johnson secure a loan – weeks before the then-prime minister recommended him for the role.

Mr Johnson has been lauded as “a true friend” of Ukraine during a surprise visit to the country, according to the Daily Express.

Front page: Boris back on the front line #TomorrowsPaperToday

Ex-PM urges West to ‘double down’ on support to Ukraine https://t.co/OXHWgid87T pic.twitter.com/28KgoqQA0G

The Daily Telegraph says National Grid will today pay customers to switch off to conserve electricity as temperatures plummet.

‘National Grid ready to pay customers to switch off’ #TomorrowsPapersToday

The i reports the UK business secretary has ordered energy firms to stop forcibly installing prepayment meters, but the companies say the “fundamental problem” is that millions cannot afford to pay.

I: Energy firms hit back at prepay meter ban with threat of higher bills #TomorrowsPapersToday pic.twitter.com/rLkqXJdsSv

An investigation by The Times has found more than 40 British universities have collaborated with institutions linked to the Uighur genocide, nuclear weapons development and hacking of China.

Analysis in the Daily Mail shows Britain’s benefits dependency has reached an all-time high, with more than half of households getting more from the UK government than they pay in tax.

Internal forecasts show the UK will be 15 years late in achieving its £1 trillion annual export target after being hit by Brexit, reports The Guardian.

The Daily Star asks if food firms are “taking the peas” after Tesco’s boss John Allan accused the companies of hiking prices during the cost-of-living crisis.

And The Sun reports Britain’s Got Talent judges Amanda Holden and Alesha Dixon are refusing to sign new contracts in a pay row over Bruno Tonioli joining the show.