US, allies to discuss Iranian drone transfers to Russia at UN

US, allies to discuss Iranian drone transfers to Russia at UN

Updated: 3 months, 15 days, 10 hours, 59 minutes, 36 seconds ago
A view of drones during a military exercise in an undisclosed location in Iran, in this handout image obtained on Aug. 24. Reuters-Yonhap

Separately, Ukraine has invited U.N. experts to inspect what it says are downed Iranian-origin drones used by Russia to attack Ukrainian targets in violation of U.N. Security Council Resolution 2231 that endorsed the 2015 Iran nuclear deal, according to a letter seen by Reuters.

Speaking on condition of anonymity, the diplomats said the three ― which also believe such transfers violate the resolution ― told their Council counterparts they would ask a U.N. official to brief members on the issue on Wednesday.

Ukraine says they are Iranian-made Shahed-136 attack drones ― loitering munitions that cruise towards their target before plummeting at velocity and detonating on impact. Kyiv moved on Tuesday to cut ties with Iran because of their use.

Tehran denies supplying the drones to Moscow, while Washington says Iran's denial is a lie.

Kremlin on Tuesday denied its forces had used Iranian drones to attack Ukraine.

Citing current and former U.S. officials, the New York Times reported on Tuesday that Iran has sent trainers to occupied Ukraine to help Russians overcome problems with the fleet of drones that they purchased from Tehran.

The newspaper said the Iranian trainers are operating from a Russian military base in Crimea where many of the drones have been based since being delivered from Iran. It said the trainers are from the Islamic Revolutionary Guards Corps, a part of Iran's military which Washington deems a terrorist organization.

Asked about the report, a State Department spokesperson said: "While we will not comment on purported intelligence leaks, we have been warning since July that Iran was planning to give weapons to Russia for use against Ukraine."

"There is abundant evidence that Iranian UAVs have been used to attack Ukrainian civilians and military targets, although Iran continues to lie shamelessly about its involvement," he added, saying the presence of Iranian trainers in Crimea "would further implicate Iran in assisting Russia's unprovoked and brutal war, including attacks on Ukrainian civilians." 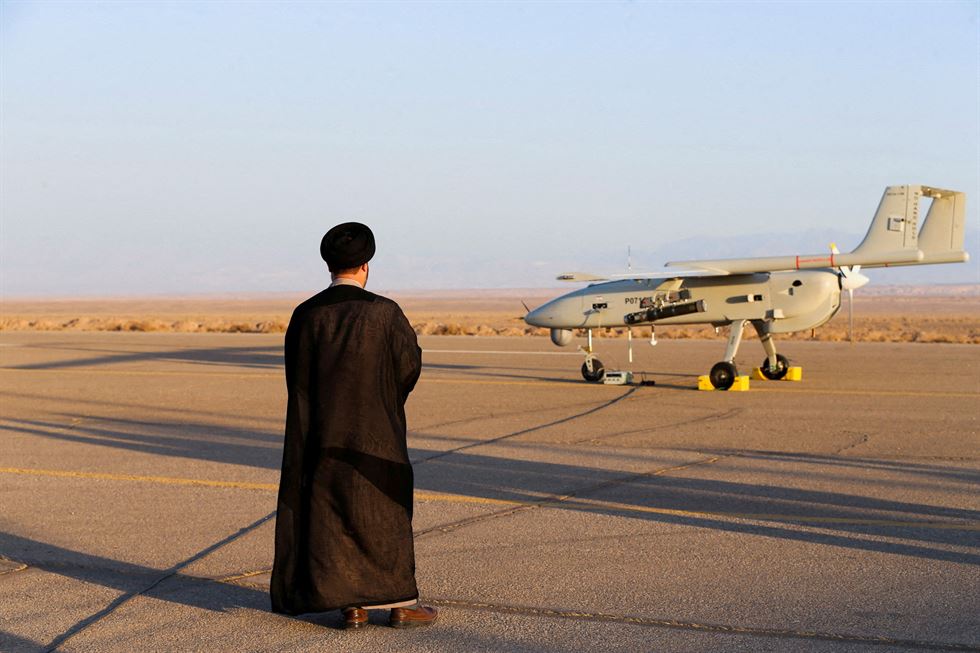 An Iranian cleric stands near a drone during a military exercise in an undisclosed location in Iran, in this handout image obtained on Aug. 24. Reuters-Yonhap

"We would like to invite U.N. experts to visit Ukraine at the earliest possible opportunity to inspect recovered Iranian-origin UAVs in order to facilitate implementation of U.N. Security Council resolution 2231," Ukraine's ambassador to United Nations said in a letter distributed to Council members on Tuesday.

The letter, dated Oct. 14, says in late August Shahed- and Mohajer-series drones were transferred to Russia in what Ukraine and major Western powers regard as a violation of resolution 2231, which endorsed the 2015 Iran nuclear deal.

Under the resolution, a conventional arms embargo on Iran was in place until October 2020. Despite U.S. efforts under former president Donald Trump, who took Washington out of the nuclear deal in 2018, to extend the arms embargo, the Security Council rejected this, allowing Iran to resume arms exports.

However, Ukraine, along with the United States, argues the resolution still includes restrictions on missiles and related technologies until October 2023 and can encompass the export and purchase of advanced military systems such as drones.

In the letter, Ukraine said "both Mohajer and Shahed UAVs meet the parameters" stipulated under 2231 "because they are capable of a range of equal to or greater than 300 kilometers (186 miles)." (Reuters)