Myroneko had come back to visit his home of Dolyna, a tiny village in eastern Donetsk, after taking refuge for months in western Ukraine. A sweeping Ukrainian counteroffensive in September had finally made it safe for Myroneko and his nieces, Maryna Snizhinska and Nina Karpets, to return. The village was in ruins. Maryna’s home had been hit by direct artillery fire at least 12 times. In the garden, the tailfin of a Grad rocket stuck up like a flower.

It wasn’t clear which army had destroyed the house. It could have been Ukrainian soldiers, battling to push out any Russians who had gained a foothold there. But Myroneko didn’t have harsh words for the Ukrainian soldiers who may have shelled it. “If I was a soldier, I would have done the same,” he said on a gray day in October. “If there had been Russians in my home, I would have said let’s bomb it.”

Standing in the ruins of his niece’s house in eastern Ukraine, Mykola Myroneko, an upbeat 58-year-old man with a trim white beard, seemed oddly at peace with the devastation caused by months of fighting after Russia’s invasion.

Standing in the ruins of his niece’s house in eastern Ukraine, Mykola Myroneko, an upbeat 58-year-old man with a trim white beard, seemed oddly at peace with the devastation caused by months of fighting after Russia’s invasion.

It wasn’t clear which army had destroyed the house. It could have been Ukrainian soldiers, battling to push out any Russians who had gained a foothold there. But Myroneko didn’t have harsh words for the Ukrainian soldiers who may have shelled it. “If I was a soldier, I would have done the same,” he said on a gray day in October. “If there had been Russians in my home, I would have said let’s bomb it.”

Myroneko had come back to visit his home of Dolyna, a tiny village in eastern Donetsk, after taking refuge for months in western Ukraine. A sweeping Ukrainian counteroffensive in September had finally made it safe for Myroneko and his nieces, Maryna Snizhinska and Nina Karpets, to return. The village was in ruins. Maryna’s home had been hit by direct artillery fire at least 12 times. In the garden, the tailfin of a Grad rocket stuck up like a flower.

Ukraine’s battlefield victories have electrified Ukrainian society. Beginning in early September, Ukrainian forces punched through Russian lines near the eastern city of Kharkiv and swept south to the Donetsk region to liberate over 3,000 square kilometers of territory. Ukrainian forces are now pushing to take back more territory in the country’s south and east. On Nov. 11, they recaptured the entire Kherson region after Russian forces pulled out of Kherson city, the only regional capital Russia had taken in nearly nine months of grinding warfare.

Yet in villages and towns secured by Ukraine’s army, the toll of Russia’s invasion cannot be rolled back by Ukrainian advances. The economic situation is dire. But more than that, destruction is rampant. More than 11,000 buildings have been partially or completely destroyed in the Kharkiv region alone, according to Ukrainian officials. For some Ukrainians, there is no home to return to. Others now find themselves facing winter in cities devastated by war. For many people in Ukraine’s east, the lives they led before Russia’s invasion are a distant dream.

Myroneko’s nieces, both in their 40s, had not expected the war to touch their village of 400 people. Standing amid the rubble of Snizhinska’s house, they recounted how refugees from the neighboring village, and then Ukrainian soldiers, streamed into town soon after Russia’s invasion in February. “It’s going to be hell,” one soldier told the sisters. 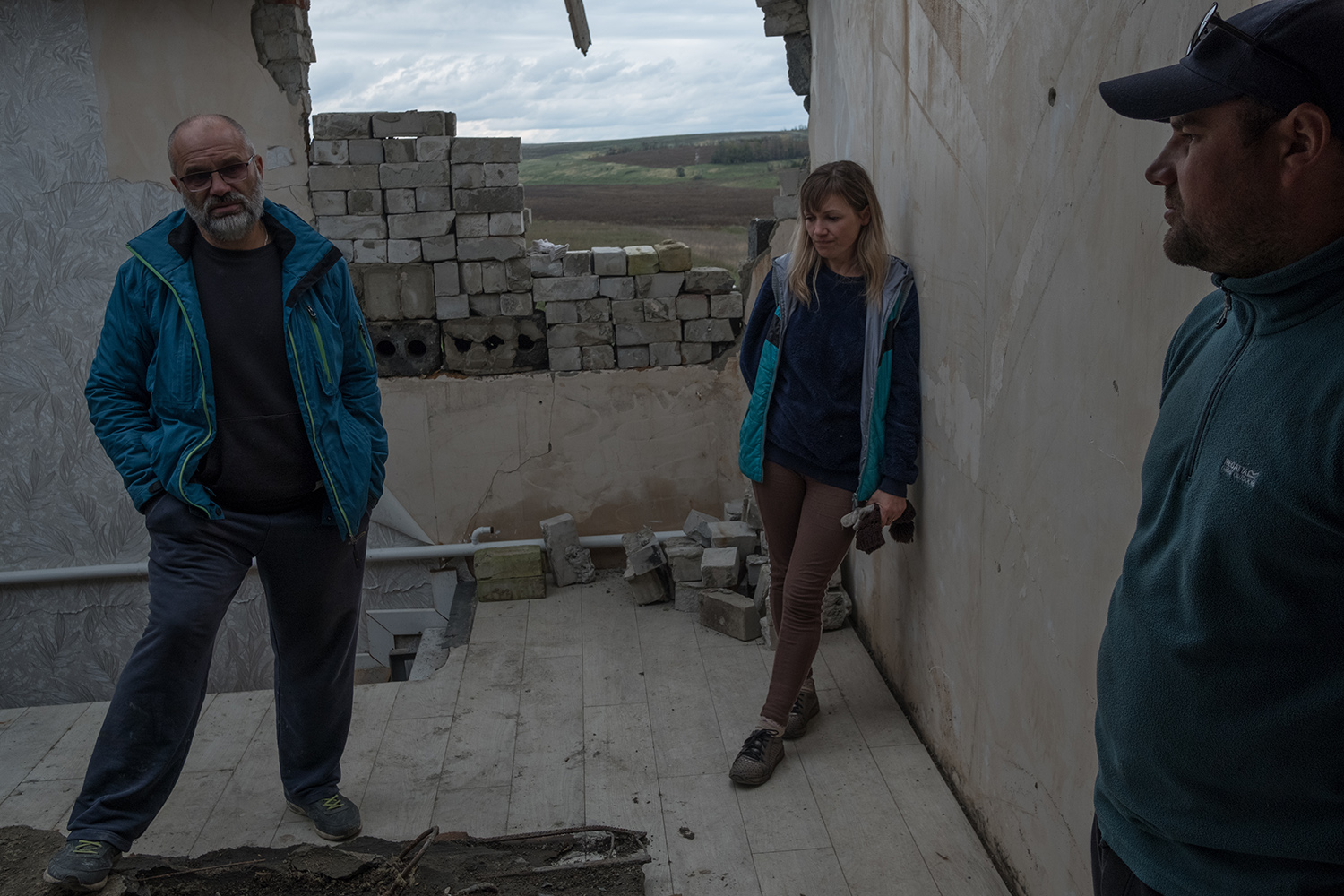 Mykola Myroneko stands alongside his niece Maryna Snizhinska and her husband in her heavily damaged home in the village of Dolyna, Ukraine.

Even then, they didn’t realize the scale of the war. It wasn’t until they first sought shelter in March in a nearby monastery, and Snizhinska and her son were wounded in a shelling attack there, that they realized how bad the situation would get. The family then left for western Ukraine, where they stayed first for three months with a volunteer and then with relatives.

Over the next few months, Dolyna was gradually destroyed by fighting, even as Ukrainian troops held the village. The basement in Myroneko’s general store became a base for Ukrainian soldiers, Myroneko said, its concrete walls sheltering them even as the store crumbled from successive strikes. Walking around its basement, he pointed out the scraps of food, clothing, and other detritus left by the Ukrainian soldiers.

Myroneko and his nieces had returned to salvage what little was left. Snizhinska had never actually moved into her house, a large red-brick building with a garden. Its interior was still being finished when the war broke out. Snizhinska showed me a photo on her phone of an orderly kitchen with gleaming appliances. The same room had now been stripped by looters, the roof above it half blown away.

Myroneko and his family have no plans to return for good. “There’s no electricity, no water, no gas—and no houses,” Karpets said. Other frontline villages suffered the same fate, they said, listing out village after village.

The remains of a destroyed Russian convoy on the road leading to Lyman.
Bullet casings litter the road toward Lyman, marking the spot where a Russian convoy was attacked by Ukrainian forces.


One of those villages is Ruski Tyshky, which sits about 160 kilometers away from Dolyna. Although it was liberated in May, the village only became safe to visit after the recent counteroffensive. Nearly every building in Ruski Tyshky has faced significant damage. In October, only 300 people remained out of a prewar population of 1,000 residents, said Anatoly, a 62-year-old man cooking outside of his ruined apartment block who declined to give his surname. Many residents left for Europe, passing through Russia.

It’s hard to say if anyone will ever return to Ruski Tyshky, since the Russian border is just about 20 kilometers away. One man visiting his old home, who declined to give his name, said he would never move back given the risk of attacks from Russian artillery, whose operating range from behind the border easily covers the village. Russian artillery continues to target villages just a few kilometers up the road. 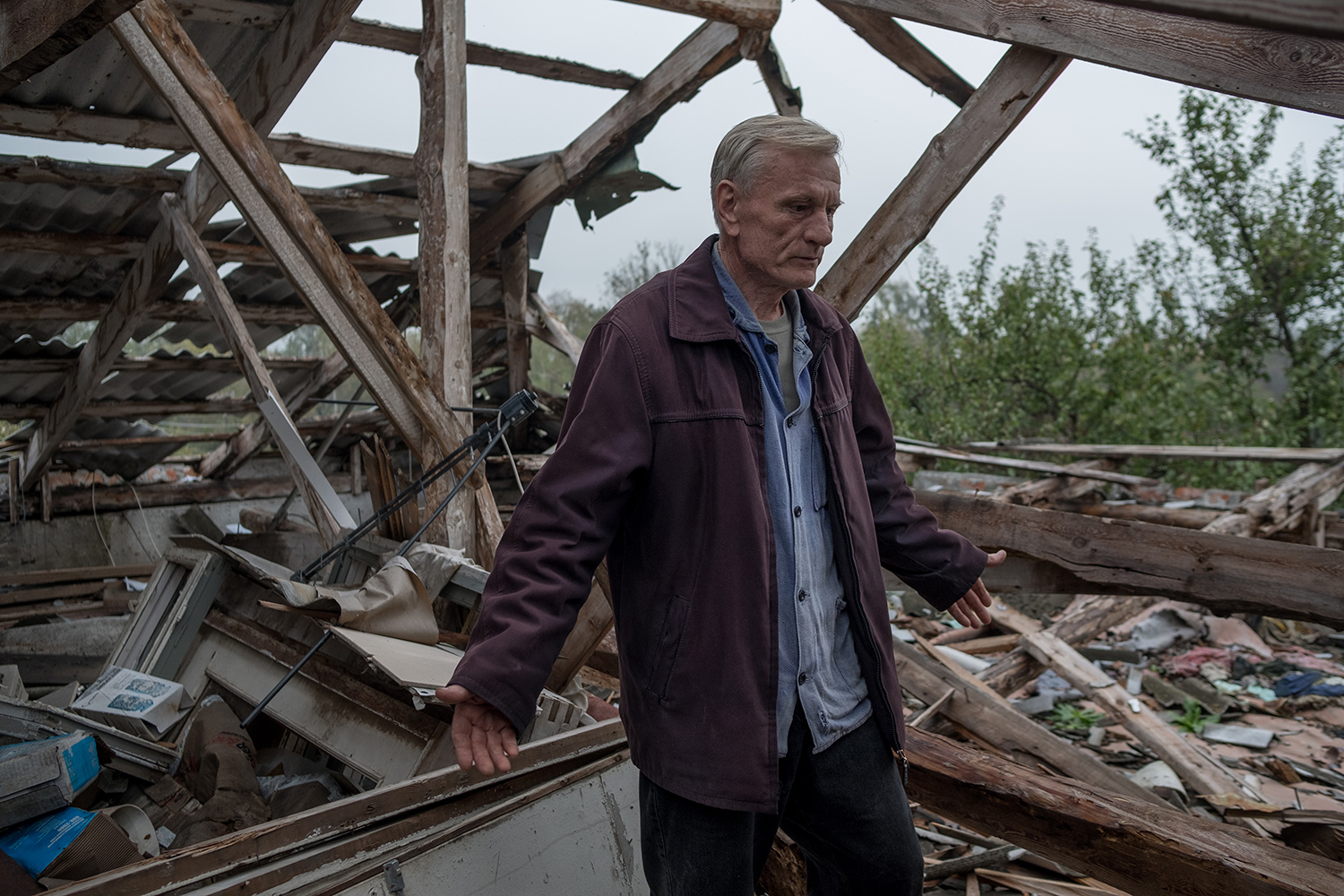 Anatoly stands in the ruins of his house, which was destroyed by Russian forces, in Lyptsi, Ukraine.

Anatoly, however, was certain the village wouldn’t be shelled again, though his reasoning was hardly reassuring. “There’s no reason to shell it again,” he said. “It’s already destroyed.”

Many Ukrainians have no choice but to continue living in the ruins. In Saltivka, a suburb of Kharkiv, 57-year-old Larissa Glukhova was moving back to her flat in October after taking refuge in central Ukraine. As a cat lover, she noted that of the five cats that had lived in the yard outside the apartment, only one remained. Across the street from Glukhova’s, a towering Soviet-era apartment building was blackened by fire.

Saltivka, which was directly on Russia’s route to invade Kharkiv early this year, became known internationally for the heavy damage it sustained from Russian fire. Now, the suburb is coming back to life, echoing with the whir of passing cars rather than booming Russian shellfire. 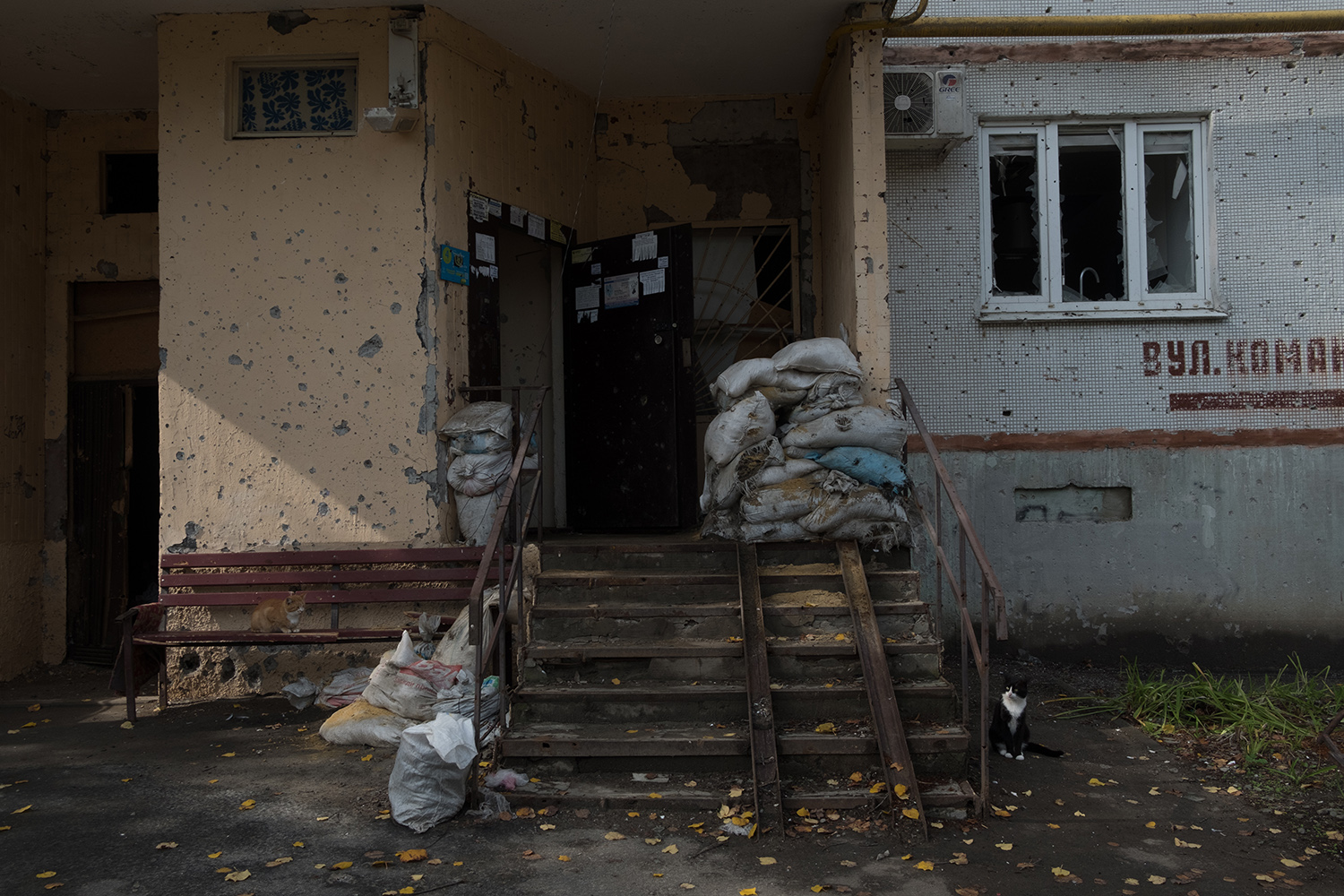 A damaged house entrance in the Saltivka suburb. The area was heavily affected by shelling. 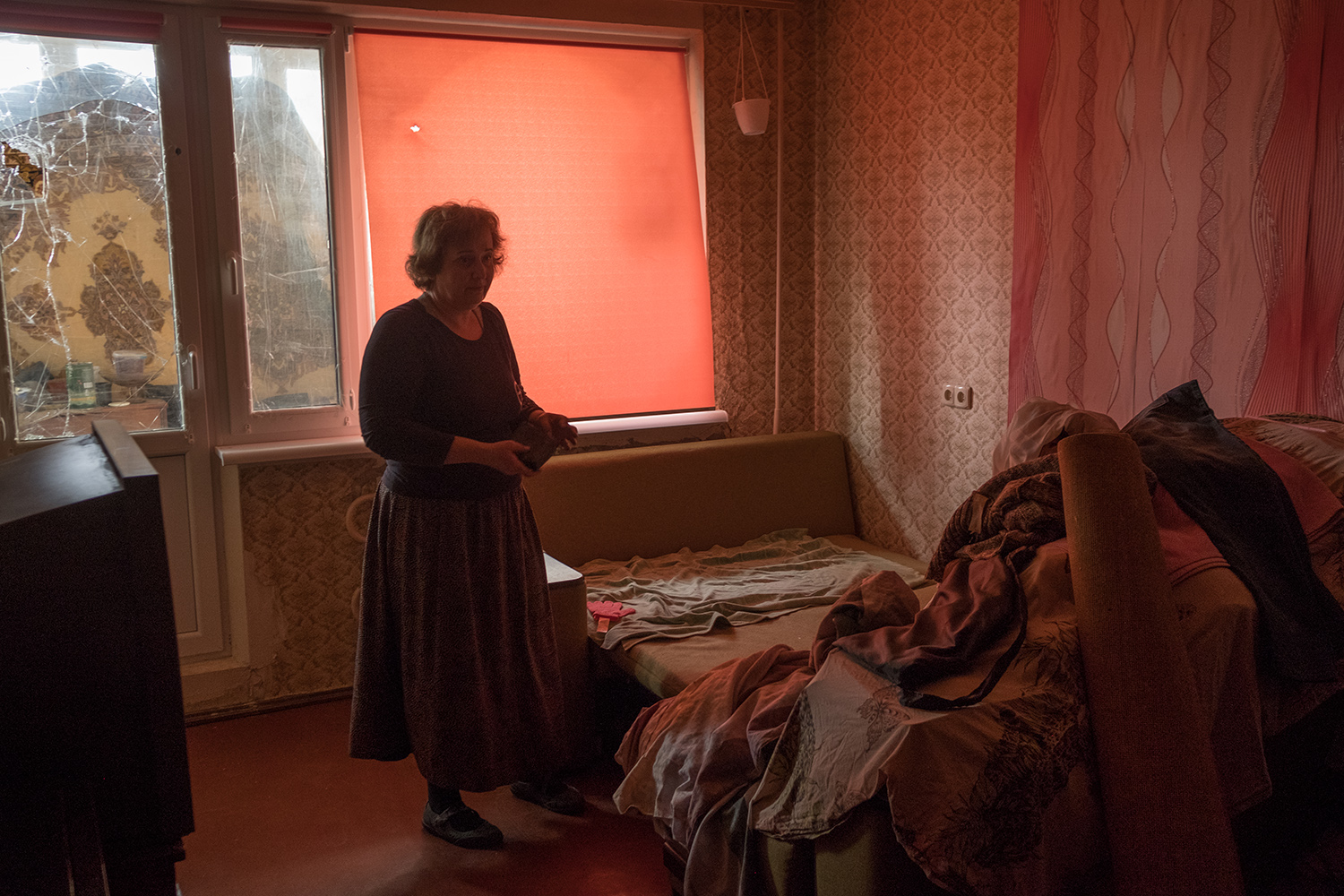 Larissa Glukhova examines her apartment in the Saltivka suburb of Kharkiv, Ukraine.

At first glance, Glukhova’s apartment appeared unscathed, the living room’s pink wallpaper casting a rosy glow in the afternoon sunlight. But examining the space more carefully revealed small shrapnel holes in the walls and sofa, and one gaping hole punched through a wall.

“I’m sad and happy at the same time,” said Glukhova, who was seeing her flat for the first time since she fled. She didn’t have another place to live, so she would have to make repairs. As she looked at her cracked windows, she wondered if she should use plastic film to insulate them.

Even Ukrainians whose homes are untouched face challenges as winter sets in. Conditions are so bad in Izyum, a nearby city, that officials have started to offer voluntary evacuations to some residents. The city is also trying to heal from the horrors perpetrated there by Russian forces, including torture, disappearances, and executions, with some 440 people found at one mass grave site. In other places, such as Lyman—a recently liberated city in eastern Ukraine—officials have said mines and unexploded ordnance have made it difficult to fix gas lines.

On a side street in Lyman, Volodymr Kutsevych, who is retired, was stacking logs cut from a tree splintered by shellfire with his wife. With the gas and electricity cut off, they would use the wood for heating and cooking. “I’ll describe the occupation in one word,” Kutsevych said, with a wry smile: “Not good.” 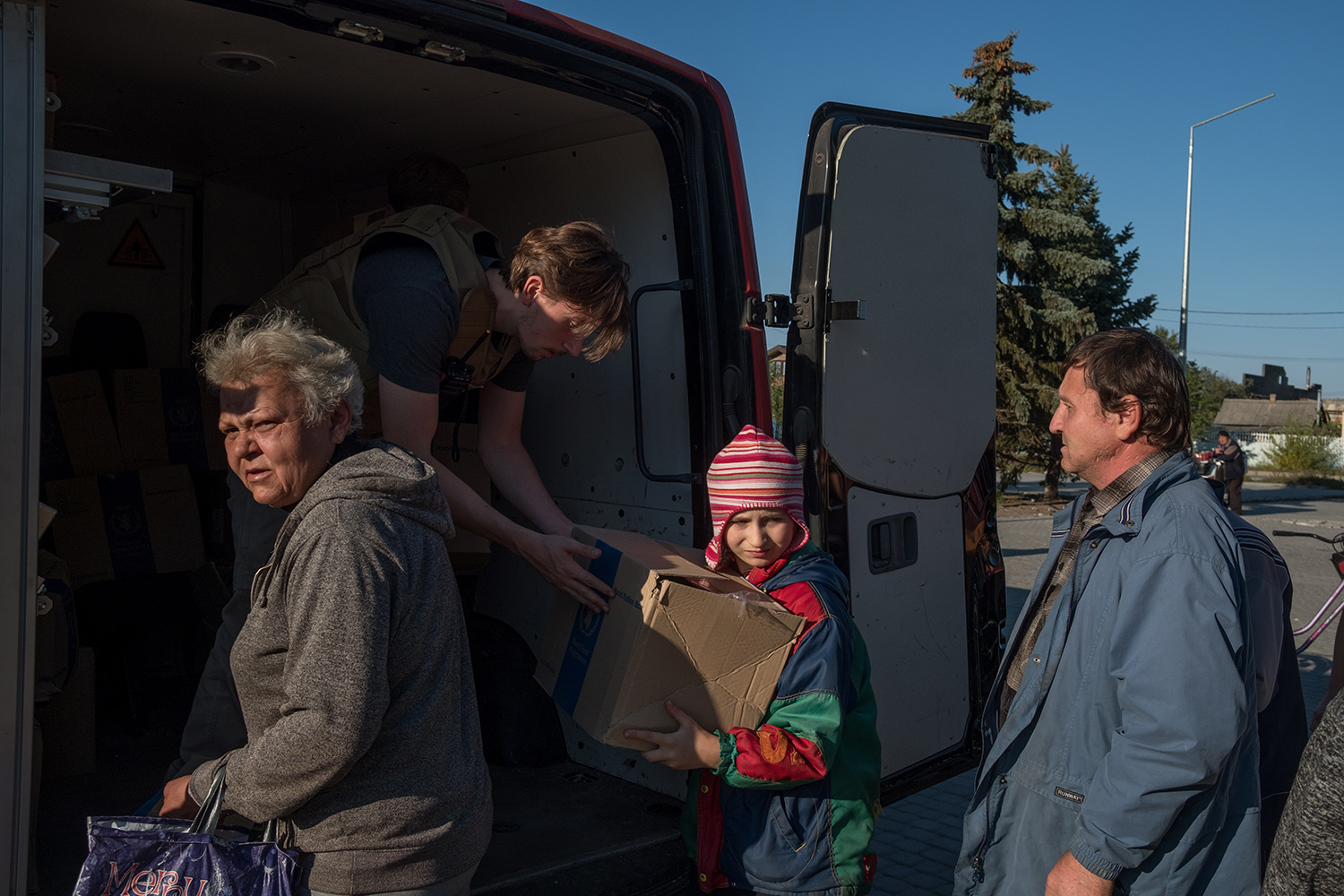 Residents receive humanitarian aid from a German nongovernmental organization at the central square in Lyman. 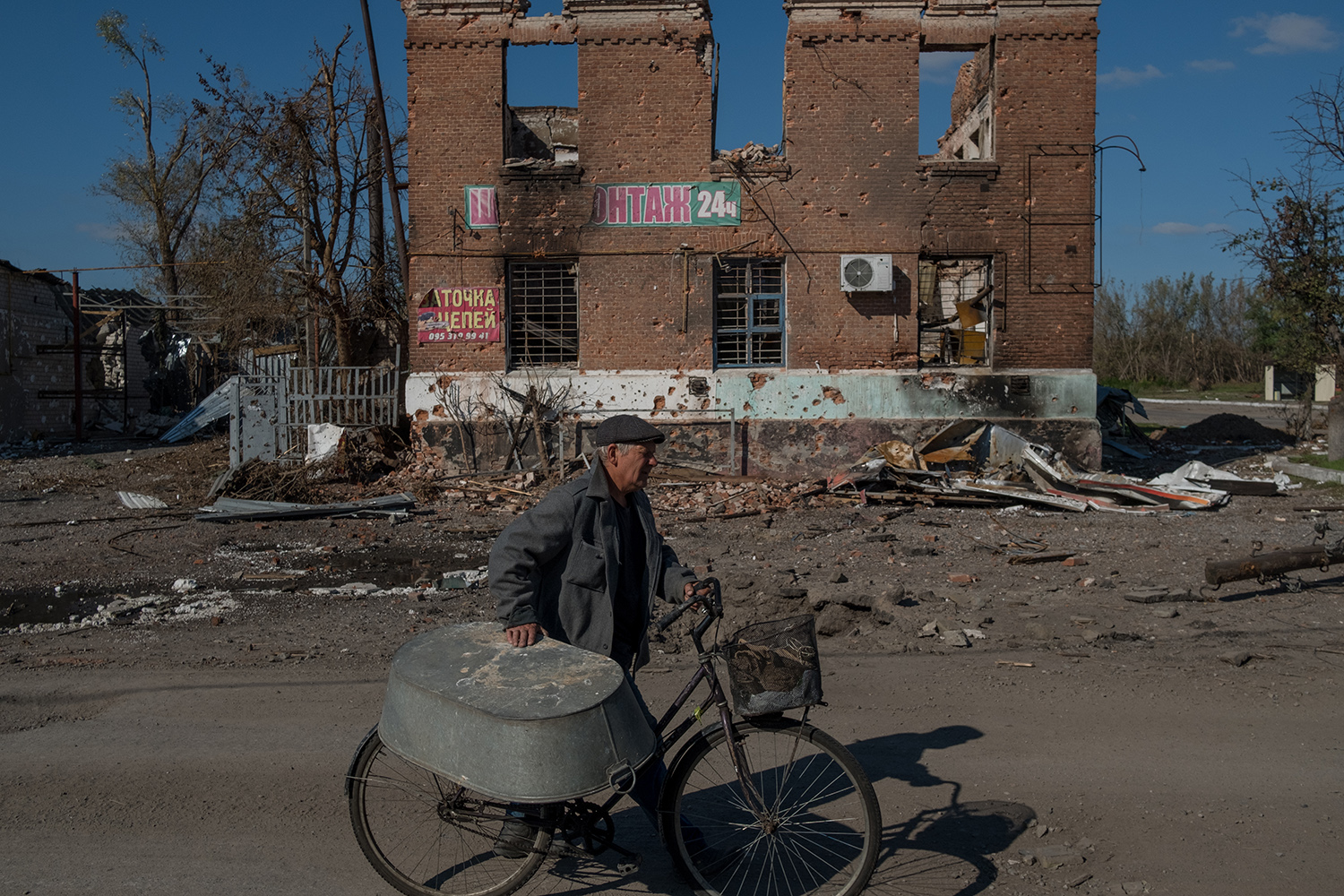 A man walks by a destroyed house on the road to Lyman in the Donetsk region.

Lyman is unlikely to be reconnected to a gas supply soon due to the destruction, regional gas official Vadym Battii told Ukrainian media in mid-October. The city is planning to supply residents with firewood and buy stoves for those who do not have them. But it’s also encouraging residents living elsewhere not to return. Surviving the winter will be “extremely difficult,” the Lyman city administration said in a social media post.

Older people are often most at risk. “I’m alone here,” said 83-year-old Lyuba Savchenko in Lyman’s main square. Her daughter was killed by Russian artillery fire, and her son and granddaughter fled. “I have nowhere to go,” she said. “My relatives elsewhere aren’t inviting me, and I don’t have the money.” 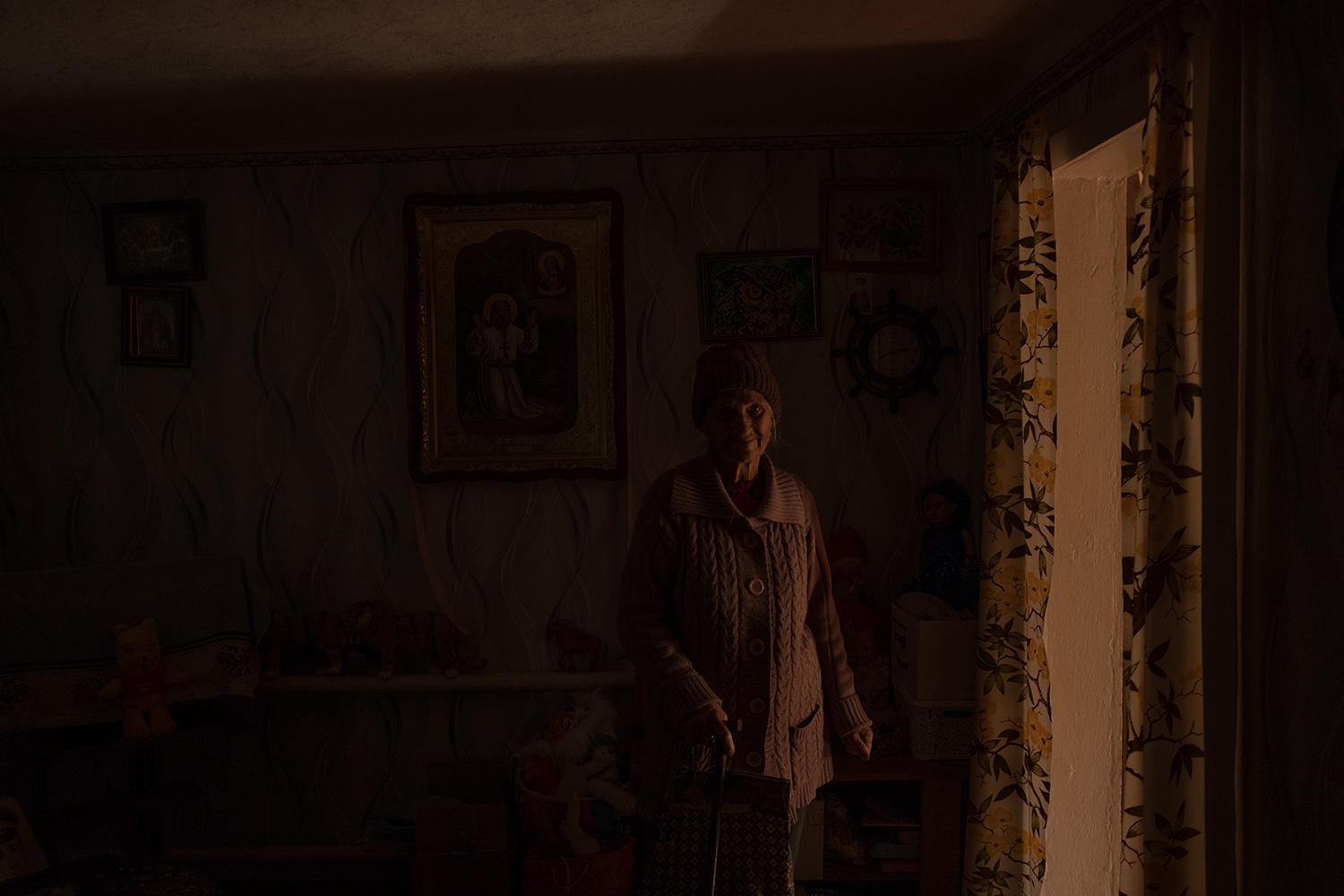 Lyuba Savchenko stands for a portrait inside her home in Lyman.

Not every town has faced this much damage. Balakliya, a major center of Russian occupation in the region, was liberated on Sept. 7 with relatively little destruction. One of the few physical traces of war is in a school, whose gym sports two enormous holes in the ceiling, shining daylight onto a cheery mural that exhorts students to go “Farther! Faster! Deeper!”

Within days of Balakliya’s liberation, a small two-car passenger train was running to the town from Kharkiv, its two-and-a-half-hour journey passing briefly over a bridge partially destroyed by fighting. By Sept. 20, local media cited the Kharkiv regional government as saying that all but 10 percent of homes in the town had access to gas. 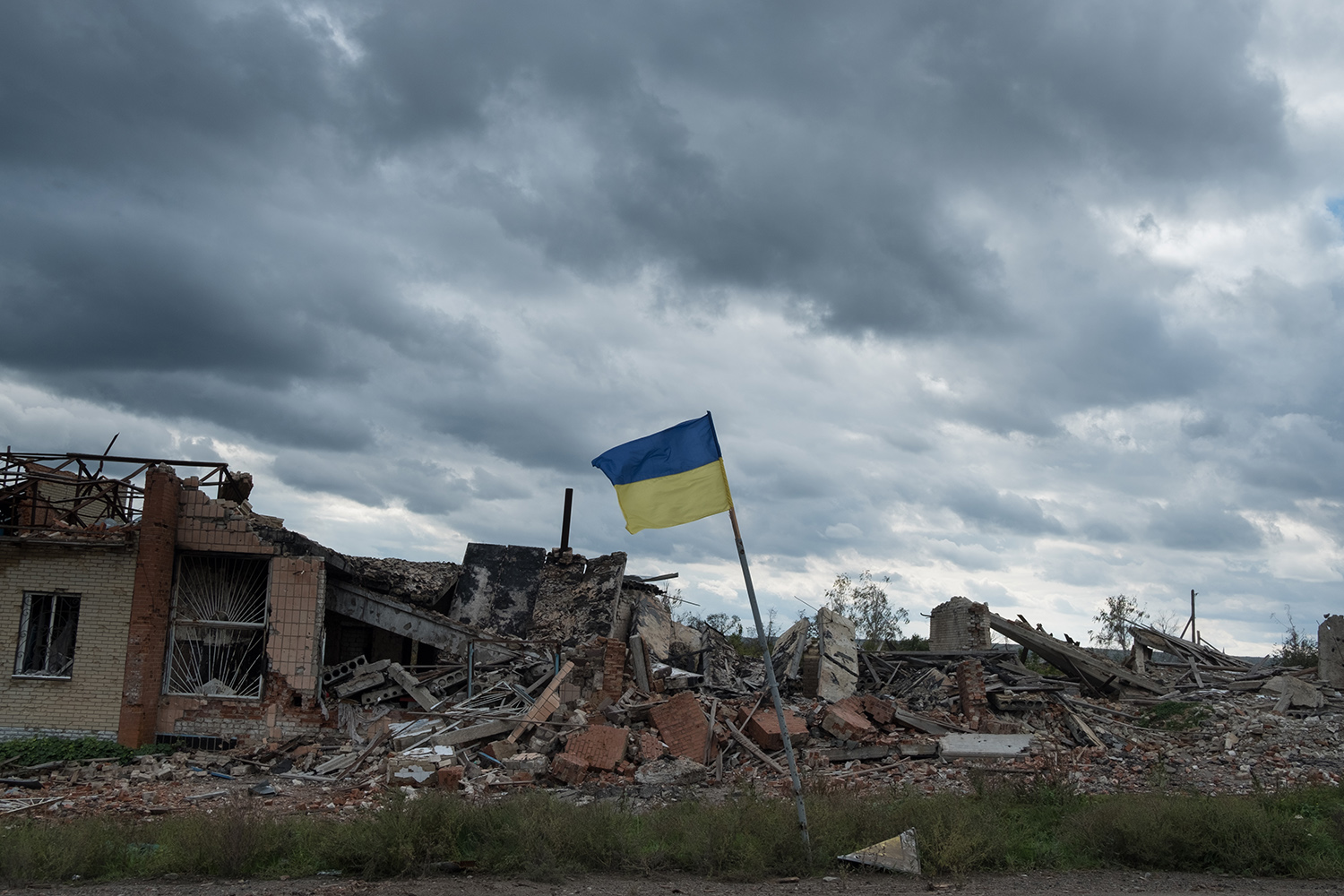 A Ukrainian flag waves above the ruins of the destroyed village of Dolyna.

Many residents of places like Balakliya, after months of living abroad or elsewhere in Ukraine, are now returning, despite the uncertain economic future and the risk of Russian soldiers reoccupying their community. On a late September morning, the Kharkiv-Balakliya train was crammed with people young and old finally going home.

Irina, a woman on the train who did not provide her surname, was heading back to Balakliya after living in Poland. A former worker in a local artillery shell factory during the Soviet Union, she once made ammunition that likely ended up stored in Russia and used in Russian cannons. She pondered her small role in creating the kinds of shells that caused so much damage in the region.

“For what did we make them? For ourselves,” she said. “If we had only known then.”