Local Russian officials have reported that a fuel depot in a southern border region exploded on Wednesday morning.

The blast allegedly occurred in Orel province, around 200 kilometres from the Ukrainian frontier. No casualties have been reported.

The suspected drone attack comes after dozens of missile strikes at several cities in Ukraine on Tuesday.

Since the start of the war, several fuel and ammunition depots in southern Russia have been targeted by drones or helicopters. In October, the regional capital of Belgorod suffered power outages after an oil depot and power plant were shelled.

Orel province would be the furthest region from the Ukrainian border to be hit. Russian authorities have blamed the Ukrainian military for the strike.

On Tuesday, two people were killed and three others wounded in other Ukrainian strikes on Belgorod, according to governor Vyacheslav Gladkov.

Meanwhile, Russian forces say they have withdrawn workers from the Ukrainian town of Nova Kakhovka, on the east bank of the Dnipro River.

Moscow claims that Ukraine's military is shelling near the town's strategic hydroelectric dam, which supplies water to the Kherson region. Kyiv has rejected the claims and says Moscow has "undermined" the dam.

Kherson was one of four regions of southeastern Ukraine that Russia annexed in September after holding so-called "referendums".

But Russian forces left the city of Kherson last week after eight months of occupation, amid a Ukrainian counteroffensive.

Ukrainian officials say they have fully restored power in seven regions, including the capital Kyiv after Russia fired a barrage of missiles at Ukraine on Tuesday.

Work to restore electricity was also underway in seven other regions, according to Kyrylo Tymoshenko, deputy head of Ukraine's presidential administration.

Ukrainian officials say Tuesday's widespread Russian strikes were the largest since the invasion was launched on February 24, leaving around 10 million people without power. At least one person was killed in a residential building in Kyiv.

The approaching winter has increased concerns about Ukraine's energy stability, but Kyiv says it is not considering evacuating cities.

Tymoshenko told Ukrainian television that officials and energy workers were instead focused on stabilising the country's power grid. 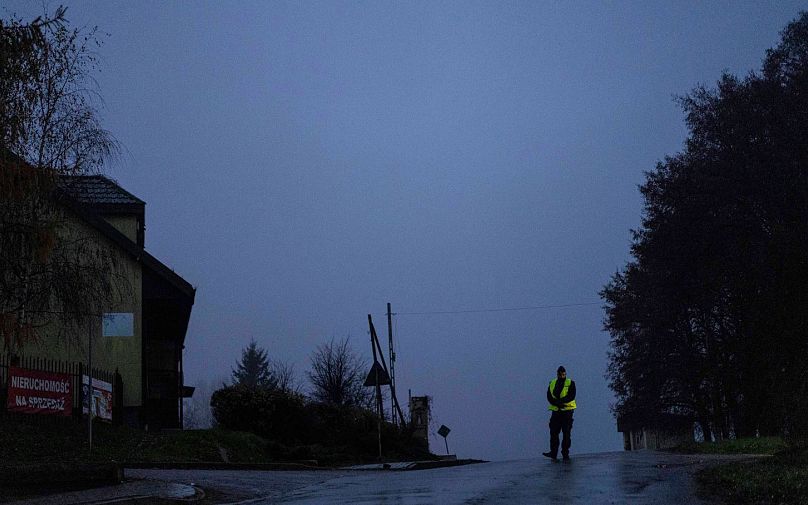 A Polish police officer stands at a checkpoint near the scene of the blast in Przewodow.

Polish Prime Minister Mateusz Morawiecki said the missile may have been fired by Ukrainian forces while trying to shoot down Russian rockets.

"There are many indications that one [Ukrainian missile] fell on Polish territory, without any intention of either party," he said on Twitter.

Poland, a NATO member, said the missile landed on a grains facility, around 6 kilometres from the Ukrainian border.

Ukrainian President Zelensky had told G20 leaders on Wednesday that the missile strike in Poland "is nothing but a message from Russia to the G20 summit".

Russia had denied involvement and said the allegations were "provocations". If Russia had deliberately targeted Poland, it would risk drawing NATO into the conflict.

The incident prompted unanimous condemnation from Western leaders and has left Poland's army on high alert.

German Chancellor Olaf Scholz was among those to lay overall blame for the incident on Moscow.

“This wouldn’t have happened without the Russian war against Ukraine, without the missiles that are now being fired at Ukrainian infrastructure intensively and on a large scale,” he said on Tuesday.

"This is the cruel and unrelenting reality of Putin’s war," added UK Prime Minister Rishi Sunak.

Turkish President Recep Tayyip Erdogan says he remains convinced that the Ukrainian grain export deal would be extended "without interruption".

"I am convinced that the grain agreement will continue," he told reporters at the G20 summit in Bali.

"We will continue our efforts to extend this agreement for one year," he added.

The July agreement between Russia and Ukraine has allowed nearly 11 million tonnes of grain to leave Ukraine's Black Sea port.

However, the Turkish and UN-brokered deal expires on Friday.

"We will continue to work for the uninterrupted extension of this agreement and to ensure the flow of grain to the countries that need it most, especially Africa," Erdogan said.

Ukrainian President Zelenskyy has also pleaded for an "infinite" extension of the agreement.

Erdogan, who has regularly offered to mediate between Russia and Ukraine, had earlier said "there can be no winners in this war". 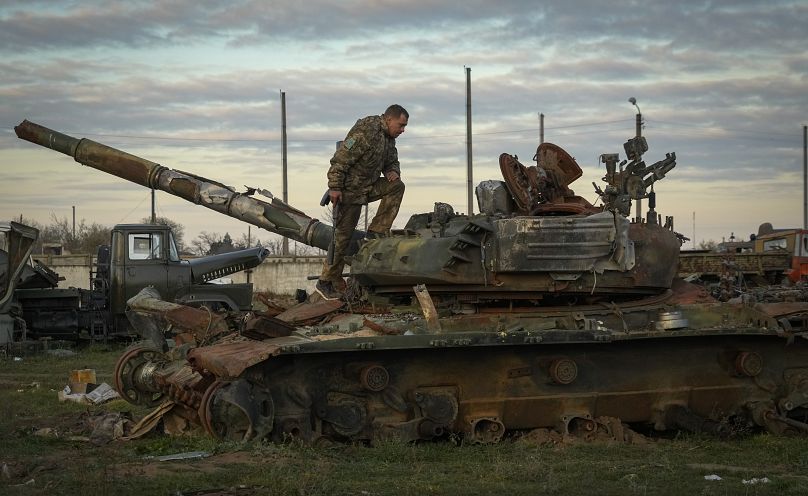 A Ukrainian soldier inspects a damaged Russian tank in the recently retaken village of Chornobaivka near Kherson.

Sweden's new government has announced that it will more military and humanitarian aid to Ukraine ahead of the winter.

Swedish Prime Minister Ulf Kristersson said that this was Sweden's ninth aid package to Ukraine and the largest to date.

"It's a bigger military support package than all eight previous packages combined," Kristersson told a news conference on Wednesday.

"It's the single largest we've done, and we follow exactly the Ukrainian priority list of what they themselves think they need just now."

The military aid will reportedly include an air defence system and ammunition, as well as basic equipment, according to Defence Minister Pal Jonson.

Some of the Swedish humanitarian aid will also go to Moldova, which has taken in large numbers of Ukrainian refugees and suffered major power outages on Tuesday.

Moldova’s pro-Western president, Maia Sandu, condemned Russia’s attacks in Ukraine that left “dozens of localities” in her country without light.

Last week, the European Union pledged €250 million to help the EU candidate country tackle the energy crisis and support its most vulnerable people.

A report by the Centre for Research on Energy and Clean Air (CREA) says Turkey has become a "new route" for Russian oil.

"An increasing amount of Russian crude [oil] is being refined in Turkey," the study found.

"With the EU set to ban crude imports from Russia on December 5, this loophole could become important".

But the independent research centre noted that Russia is making less money from its fossil fuel exports following Western sanctions.

Ukrainian officials have called for a price cap on Russian energy and an immediate ban on all refined products from Russia.

According to the CREA report, Russia made €21 billion from its fuel exports in October, down 7% from September. Revenues from exports to the European Union fell by 14% to €7.5 billion.

Turkey has increased its imports of crude oil from Russia since Moscow's invasion of Ukraine, while also stepping up its exports of oil products to European and US ports.