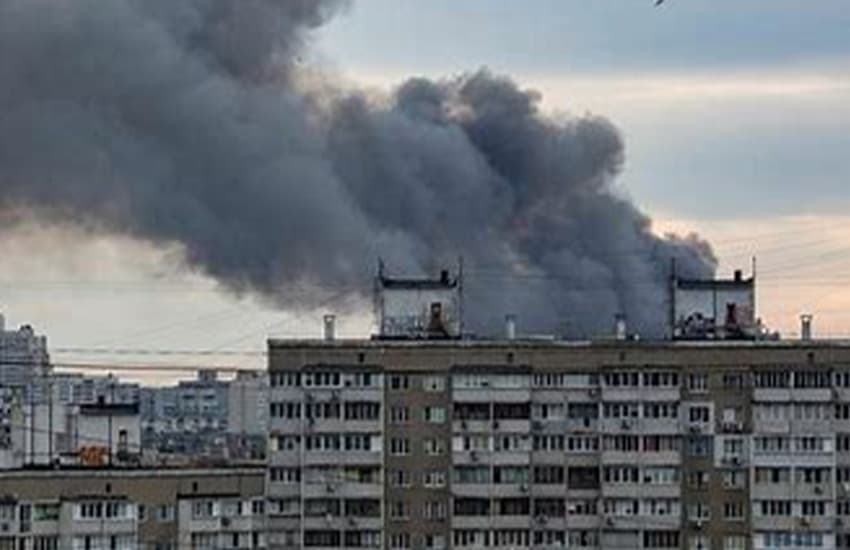 Kyiv Mayor Vitaliy Klitschko wrote on social media: “According to preliminary information, two residential buildings were hit in the Pechersk district. Several missiles were shot down over Kyiv by air defence systems.”

Russian missiles are killing people and ruining infrastructure across Ukraine right now. This is what Russia has to say on the issue of peace talks. Stop proposing Ukraine to accept Russian ultimatums! This terror can only be stopped with the strength of our weapons & principles.

Missile strikes were also reported in the western city of Lviv and the northeasthern city of Kharkiv. Ukrainian Foreign Minister Dmytro Kuleba wrote on Twitter, “Russian missiles are killing people and ruining infrastructure across Ukraine right now. This is what Russia has to say on the issue of peace talks.”

Poland’s prime minister called for an emergency meeting on Tuesday citing a “crisis situation,” after unconfirmed media reports that Russian missile strikes crossed into the NATO member, killing two. Polish media reported that two people died after a projectile struck Przewodow, a Polish village near the border with Ukraine.

Moldova temporarily lost power on Tuesday as Russian missiles struck Ukraine. One of the key power lines that supplies the small nation was affected following the strikes on Ukraine, Infrastructure Minister Andrei Spinu said in a statement.

Spinu said that downing of the line resulted in “massive” power outages across the country, noting that the key tranmission lines were not “damaged, but were automatically disconnected as a safety measure.”

The United States strongly condemns Russia’s latest missile attacks against Ukraine, which appear to have struck residential buildings in Kyiv and additional sites across the country,” Sullivan said in a statement.

“These Russian strikes will serve to only deepen the concerns among the G20 about the destabilizing impact of Putin’s war,” Sullivan said. Britain’s foreign minister, James Cleverly, also condemned the “the callous targeting of Ukrainian cities.”

“Putin is losing on the battlefield and – as we saw today at the G20 – diplomatically too,” Cleverly wrote on Twitter.

Putin is losing on the battlefield and – as we saw today at the G20 – diplomatically too.

Ukrainian President Volodymyr Zelenskyy told world leaders “now is the time” to end the Russian invasion in an address to the G20 summit in Bali, Indonesia, on Tuesday. Ukraine is not a member of the group; however, Zelenskyy was one of several world leaders invited as guests as the conflict looms large over the meeting of the world’s 20 biggest economies.

Germany and Spain plan to train thousands of Ukrainian troops

The EU’s military training mission aims to prepare 15,000 Ukrainian soldiers, the largest such mission yet by the EU. The primary hub of operations will be in Poland with an auxiliary headquarters in Germany.

German Defense Minister Christine Lambrecht told a meeting of her EU counterparts in Brussels that Berlin will train 5,000 soldiers “in a wide range of skills” by the middle of next year.