SCHIPHOL, Netherlands — A Dutch court on Thursday convicted three men of murder for their role in shooting down a Malaysia Airlines passenger jet with a Russian surface-to-air missile, killing all 298 people aboard the aircraft as it flew over a separatist-controlled region of eastern Ukraine in 2014.

The convictions, along with the life sentences handed to the two Russians and a pro-Moscow Ukrainian who were tried in absentia, were seen as directing the blame for the jet’s downing at the government of Russian President Vladimir Putin, even though the Kremlin has always denied any connection to it.

The trial, held in a courtroom near the Amsterdam airport from where Flight MH17 took off for Kuala Lumpur, Malaysia, put the Kremlin’s involvement in the separatist conflict in eastern Ukraine at the heart of the case.

Against the geopolitical upheaval caused by Russia’s invasion of Ukraine this year, the court held that Moscow in 2014 had overall control of the self-proclaimed Donetsk People’s Republic, the separatist area where the missile was launched.

Presiding Judge Hendrik Steenhuis said evidence presented by prosecutors in the trial that lasted more than two years proved the Boeing 777 was brought down by a Buk missile fired by pro-Moscow Ukrainian fighters on July 17, 2014. The crash scattered wreckage and bodies over farmland and fields of sunflowers. 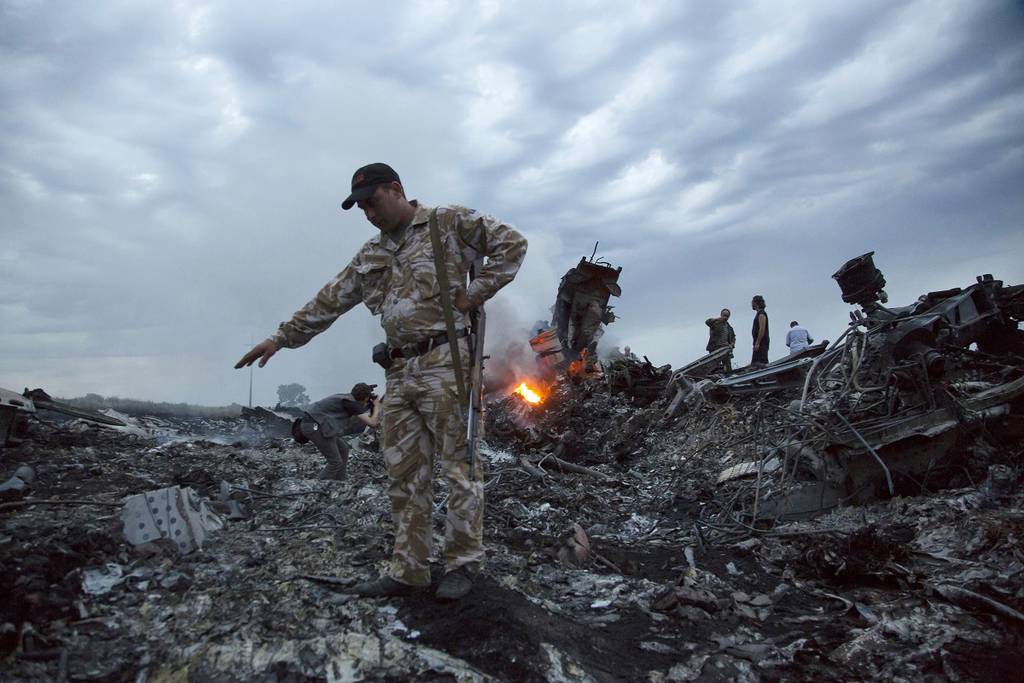 People walk among the debris at the crash site of Malaysian Airlines Flight MH17 near the village of Grabovo, Ukraine, on July 17, 2014. (Dmitry Lovetsky/AP)

The 298 passengers and crew came from more than a dozen countries, although nearly 200 were Dutch citizens.

As relatives of the victims blinked away tears, Steenhuis described their torment of having to wait for the remains of their loved ones to be returned to them.

“A piece of bone from a hand. A piece of leg or a foot. In two cases, no parts of a loved one returned,” he said.

Russians Igor Girkin and Sergey Dubinskiy, and Ukrainian separatist Leonid Kharchenko, who remain at large, were convicted for their role in bringing the Buk missile system from a Russian military base into Ukraine and putting it into position for its launch.

Russian Oleg Pulatov, the only suspect represented by defense lawyers at the trial, was acquitted for lack of evidence.

Prosecutors said the convicted men have two weeks to file an appeal.

The court awarded damages to the families of more than 16 million euros ($16.5 million) but it is unclear just who would pay that sum.

Relatives welcomed the verdict even though it is unlikely any of the three convicted men will serve their sentences.

“This is part of justice for us. It is not the whole thing yet , but it is a good start,” said Seline Frederiksz-Hoogzand. “Even though nobody will go to prison, justice has been done.”

For the families, the ordeal of attending the trial was compounded by the fact that it was held near the airport where their loved ones embarked on the fateful flight. Outside the court, planes could be heard taking off and landing nearby on a cold, gray day.

Prosecutors focused their case on the circumstances behind the downing of the plane, saying that from mid-May 2014, the Donetsk People’s Republic “was actually controlled from the Russian Federation.”

Several families of victims were relieved the court pointed to Russia’s involvement.

“Without a shadow of a doubt, they are fully responsible up until the Kremlin,” said Peter Langstraat, a lawyer representing one of the families. “You cannot move this heavy military material without consent of somebody high up in the military hierarchy. What does it means — close to or in the Kremlin.”

Marieke de Hoon, assistant professor of international criminal law at the University of Amsterdam, said the court’s findings could be used in other proceedings by Ukraine and the Netherlands seeking to hold Moscow responsible.

“Today the court said that indeed from mid-May 2014, this was an international armed conflict, meaning Russia was a party in this conflict,” she said, adding that the court “has a high authoritative value.”

Ukrainian President Volodymyr Zelenskyy said the verdict was a vital first step in assigning responsibility for the crime but added that more prosecutions and convictions were needed.

“It is an important decision in the court. ... It is necessary that those who ordered it also find themselves in the dock, because impunity leads to new crimes,” he tweeted.

U.S. Secretary of State Antony Blinken welcomed the verdict as “a solid step towards justice,” he said more work lies ahead to hold those responsible to account.

The Russian Foreign Ministry accused the court of bowing to pressure from Dutch politicians, prosecutors and the news media.

“There is no need to talk about objectivity and impartiality in such conditions,” the ministry said in a statement.

There had been fears the massive evidence wouldn’t necessarily lead to convictions. Steenhuis, however, cited details such as where the Buk was fired from, the burns it left on a field in rebel-held territory, and how it moved around eastern Ukraine. He also delved into the defendants’ roles.

“There is no reasonable doubt possible,” he added, dismissing defense arguments that something else might have happened to the plane.

And even if the downing might have amounted to a military miscalculation, Steenhuis said “such an error did not change the intent.”

The most senior defendant was Girkin, a 51-year-old former colonel in the Russian Federal Security Service or FSB. At the time of the downing, he was defense minister and commander of the armed forces of the breakaway Donetsk region and now is involved in the Ukraine war.

Dubinskiy, 60, was a former officer in the Russian military intelligence service, the GRU, and one of Girkin’s deputies in 2014. Like Girkin, he was in regular contact with Russian officials in 2014 and was also head of intelligence in the Donetsk People’s Republic.

Kharchenko was described as commander of a pro-Russian rebel combat unit and took orders directly from Dubinskiy.

Pulatov, the acquitted defendant, is a 56-year-old former officer in the special units of the GRU and was a deputy to Dubinskiy at the time MH17 was shot down.

In a video played in court, he insisted he was innocent and said: “What matters to me is that the truth is revealed. It’s important for me that my country is not blamed for this tragedy.”