The 14th Madeleine Award: a table, a lettuce and a smartphone

The 14th Madeleine Award: a table, a lettuce and a smartphone

But the picture the world sees is Putin isolated and unable to hear.

If the man wasn’t a war criminal brandishing nukes, the image would be risible (think Charlie Chaplin strutting in The great dictator).

With Putin marooned amid megalomania at his massive table, it’s time for the 14th Madeleine Award for symbol, stunt, prop, gesture or jest.

The annual award is inspired by the late Madeleine Albright, the US ambassador to the United Nations (1993 to 1997) and US secretary of state (1997 to 2001) who sent diplomatic messages via her lapel brooches.

For Albright, it wasn’t ‘read my lips’ but ‘read my pins’. She wore a golden brooch of a coiled snake to talk to the Iraqis, crabs and turtle brooches to symbolise the slow pace of Middle East talks, a huge wasp to needle Yasser Arafat, and a sun pin to support South Korea’s sunshine policy. Her favourite mistake was wearing a trio of monkey brooches to meet Putin, causing him to go ape.

The Madeleine Award leans more to whimsy than war, so Putin and his giant table don’t get the top prize. Instead, they get a minor gong, the ‘Diana’, marking ‘the utility and force of photographs’. The trophy is named for Diana, Princess of Wales, a princess who understood pics: ‘As Diana used to say, the picture is what counts,’ former UK prime minister Tony Blair wrote.

And that picture of Putin defines him in so many ways the Russian leader doesn’t comprehend. A Karl Marx line comes to mind: ‘Men make their own history, but they do not make it as they please.’ What would please Putin about the image is what Marx described as the effort to ‘conjure up the spirits of the past to their service, borrowing from them names, battle slogans, and costumes’. The picture of Putin posing as czar is as bleak as it is bizarre.

The next of the minor trophies is the OOPS! Award for blooper and blunder, also known as a ‘Boris’, saluting a British prime minister who proved that blunders could build a careers. When sacked from shadow cabinet, many moons ago, Boris commented: ‘There are no disasters, only opportunities. And, indeed, opportunities for fresh disasters.’ And didn’t he give that philosophy a helluva ride …

Because he so expressed the spirit of the OOPS!, Boris Johnson won the award for a second time last year, for a zanier-than-usual speech—the judges noted the betting that the tow-haired tyro wouldn’t occupy 10 Downing Street much longer, and embraced one last burst of Boris.

This year, the Boris award stays in London. The OOPS! goes to Liz Truss, the shortest-serving prime minister in the history of the United Kingdom. In the contest between Truss and a lettuce about who’d last longer, the lettuce triumphed.

The next honour is the George Orwell prize for double-think and euphemism. This year’s Orwell goes to the readers of Russia, who have turned anew to Orwell’s novel 1984, which describes a dictatorship oppressing its people to wage senseless war.

Orwell used Stalin as a model for the personality cult of the all-seeing Big Brother. Raging against ‘thoughtcrime’ and proclaiming ‘doublethink’, Big Brother preaches that ‘WAR IS PEACE’, ‘FREEDOM IS SLAVERY’, ‘IGNORANCE IS STRENGTH’ and ‘2 + 2 = 5’ (drawn from a Soviet poster about the first five-year plan). With that plot, you can see why Russian downloads of a new translation of 1984 made it one of their top novels of 2022.

Before announcing the big award, we salute the woman who inspired this annual bit of silly-season whimsy with serious purpose. Madeleine Albright, America’s first female secretary of state, died in March at the age of 84, lauded as ‘a political and feminist icon’.

I launched the Madeleine Award after Albright published her 2009 book Read my pins: stories from a diplomat’s jewel box; I didn’t approach her about the idea (better to ask forgiveness than permission). But during an online event with a bunch of Australians in Washington in 2021, Albright was told about the Madeleine Award and responded with customary brio: ‘I love it!’ Take that as enthusiastic acknowledgement, if not endorsement.

After Albright’s death, The Interpreter’s Daniel Flitton had the perfect Australian tribute, in an interview with Australia’s first female foreign minister, Julie Bishop: ‘We shared a love of jewellery,’ Bishop said. ‘She often used her jewellery to make a diplomatic statement.’

Bishop took inspiration from Albright: ‘I at times wore a brooch that would hopefully send a message.’ On a visit to Israel and the Palestinian Territories, for instance, Bishop wore a peace dove. ‘I didn’t do it to the extent of Madeleine Albright. I wore brooches and people could read what they liked into it.’

My favorite Albright line is from her book Fascism: a warning: ‘I am an optimist who worries a lot.’ Her life and thoughts make this year’s winner a simple pick: the country of the year, Ukraine, for its heroism, ingenuity, resilience and inspiration, and the person of the year, Ukraine’s President Volodymyr Zelensky.

Zelensky is credited with what must be the quote of the year, responding to the US offer to help him escape from Kyiv at the start of the Russian invasion: ‘The fight is here; I need ammunition, not a ride.’ This, surely, is a modern-day version of, ‘I have not yet begun to fight.’

Back in February, when the world feared Russia would be victorious within days, Zelensky went out on the streets of Kyiv and posted a 26-second video with this message: ‘I am here. We are not putting down arms. We will be defending our country because our weapon is truth.’ 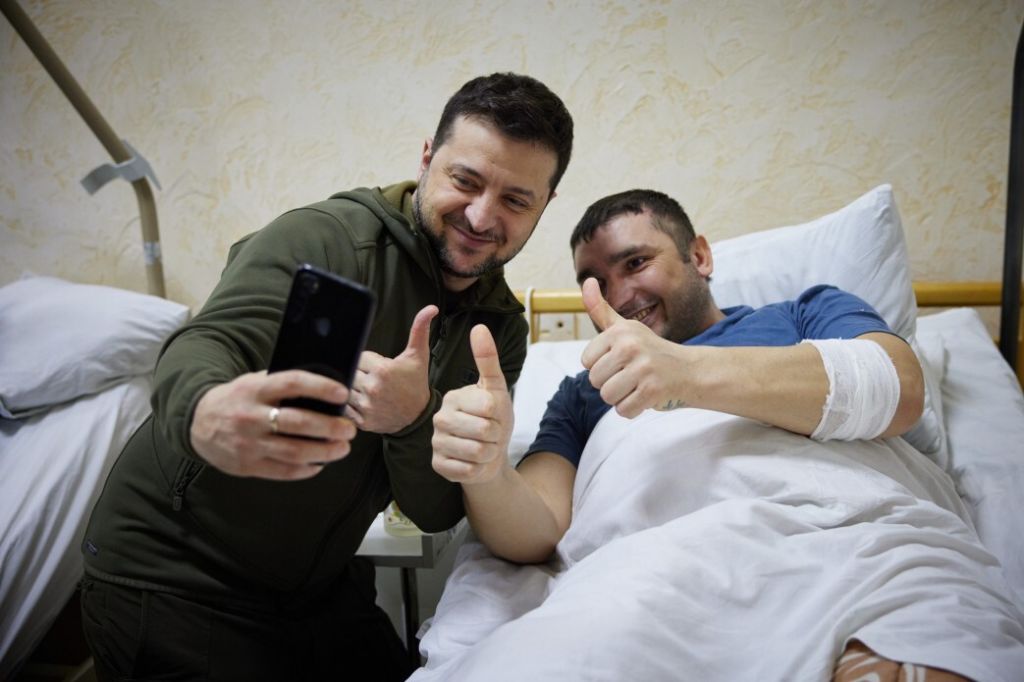