Smoke rises after a Russian attack in Kyiv. (Getty)

Russia is struggling to destroy Ukraine’s electricity network due to a shortage of high-precision long-range missiles, according to reports.

Western officials said Moscow was increasingly resorting to Iranian-made Shahed drones to mount attacks because they were running low on stocks of cruise missiles.

They said the drones were not a like-for-like substitute as they carried relatively small explosive payloads and were susceptible to being brought down by Ukrainian air defences.

An unnamed official said: “Our assessment is that the ability for the Russians to continue with these saturating barrages of precision weapons is getting to the point now where this will be unsustainable."

Thick smoke rose into the sky after several loud blasts echoed through northern Kyiv, where there is a thermal power station, according to witnesses.

A man sheltering in the basement of an apartment building in the southern port city Mykolaiv was also killed and the northern Ukrainian city of Zhytomyr was without water and electricity.

Electricity supplies were interrupted to some parts of Kyiv because of "damage to a critical infrastructure object" but were later restored, power producer DTEK said.

The Western official added: “Iranian UAVs (unmanned aerial vehicles) are playing an increasingly significant role although we can see that Ukraine is effectively neutralising many of them before they hit their targets.

“They do fly quite slowly so they are much more susceptible to being shot down by small arms and other systems. The tactics have been using them en masse in the hope some get through.”

Read more: More than 100 Ukrainian women released in one of the war's biggest prisoner swaps 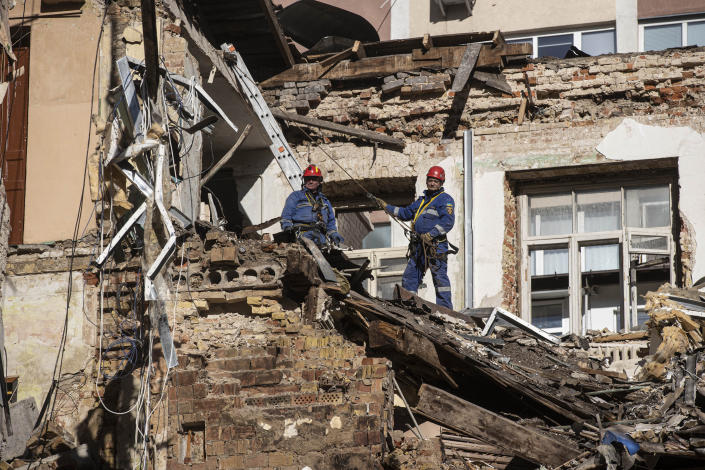 He tweeted: “Another kind of Russian terrorist attacks: targeting energy & critical infrastructure. Since Oct 10, 30% of Ukraine’s power stations have been destroyed, causing massive blackouts across the country.

“No space left for negotiations with Putin's regime.”

Russia said on Tuesday its forces were keeping up strikes against military and energy infrastructure targets in Ukraine.

The Russian defence ministry said in a statement the attacks were carried out with high-precision long-range air and sea-based weapons.

The targets were "military command and energy infrastructure of Ukraine, as well as arsenals with ammunition and foreign-made weapons," it said.

"All assigned objects were hit," it added.