When Rishi Sunak steps off the plane in Bali for what will be his first major diplomatic test as prime minister, there is a forecast for heavy rain on the Indonesian island paradise and a veil of gloom over the prospects for any agreement between G20 leaders.

The longest shadow has been cast by Russia – and that country’s membership of the G20 means that British officials acknowledge it will be nearly impossible for the leaders to agree a communique at all.

It is likely to be written off as a diplomatic failure, thus raising questions about how the group itself can continue to function meaningfully. World leaders will not even take part in an official “family photo” when they meet at the summit due to widespread discomfort at Russia’s presence.

Nothing can be agreed that would condemn Russia, because Russia would never agree to condemn itself, but the invasion of Ukraine has sent shockwaves through the global economy, affecting food and energy supplies worldwide, meaning that even agreeing a resolution on those pressing topics looks very difficult.

For months, Moscow has kept open the possible presence of Vladimir Putin himself at the summit, but officials have now confirmed he will not attend. Sergei Lavrov, his longstanding foreign minister, will be there in his place, but Lavrov himself is not averse to some dramatics, staging a walkout at the G20 foreign minsters meeting in July.

Ukraine’s president, Volodymyr Zelenskiy, has been invited to address the summit virtually, but has previously said he would not take part if Putin was present. 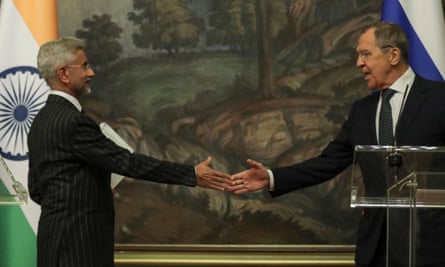 The UK, while not particularly welcoming Putin’s presence, will privately acknowledge that there would have been diplomatic advantage in seeing nations give Putin the cold shoulder.

Aside from the initial intervention, G7 leaders have broadly reached a consensus that leaders should not engage with the Russian representative through the summit. It is likely to make for a very awkward dynamic.

“Obviously the prime minister is of the view that it would be right that collectively with our allies we confront any Russian official … who attends the G20 about their ongoing illegal war and use the same messages we have been using in one voice for so many months now,” a No 10 spokesperson said.

Sunak’s own views on foreign policy remain something of a mystery and have always been framed in the past via his role as the chancellor. He is said by some of his critics to be inclined to take a softer approach to China.

No 10 sources say Sunak’s key objective is to reiterate the UK’s support for Ukraine, especially because of the scale of recent political upheaval in the UK and the extraordinary reputation that Boris Johnson enjoyed among Ukrainians. He is set to use his first intervention at the initial leaders’ meeting on Tuesday to address Russia’s invasion directly.

There is also the domestic politics – allies of Johnson had briefed that Sunak had been the one who sounded notes of caution as chancellor on Russian sanctions during the first invasion, and Sunak is keen to put any doubts to bed.

UK negotiators have not given up hope of agreeing a communique, despite the fact that none have been agreed for any of the meetings in the buildup to the summit, but there will be an attempt to build something on the global financial crisis and on issues such as technology and the aftermath of the pandemic.

The frustration is that if one is not agreed, it will be a tacit acknowledgment that Russia is able to hold back making progress on any global issue among the group.

The first session poses a major challenge, particularly for European economies, because the focus will be on energy and food, both topics that are almost impossible to reach any kind of consensus on because of the effect the war on Ukraine is having on energy prices and on grain.

The prime minister is hoping for at least some broad agreed words on the global economy and inflation that he can use for domestic purposes. Sunak will fly home just hours before his autumn statement, where his chancellor, Jeremy Hunt, is expected to unveil £60bn of cuts and tax rises, in the aftermath of his predecessor Liz Truss’s damaging mini-budget. The UK has been seen around the world as a cautionary tale about how to approach inflation – something Sunak is very keen to correct.

Most important are likely to be the bilaterals with world leaders on the margins of the summit and there is hope he will see the US president, Joe Biden, though the focus for the Americans is likely to be on China.

No 10 has suggested that Sunak will prioritise meeting Indo-Pacific leaders, having met a number of European leaders already in Sharm el-Sheikh. That is likely to mean Narendra Modi of India and the new Australian prime minister, Anthony Albanese.

With the Australians, there is the AUKUS defence deal to be discussed as well as trade. The UK is keen to progress joining the Comprehensive and Progressive Agreement for Trans-Pacific Partnership (CPTPP), so Sunak could spend time with the Koreans, Japanese and Canadians.

Negotiators failed to get the “deal for Diwali” done with India, partly down to the political chaos in the UK, and No 10 is keen to give that a new push. There are also potential bilateral energy deals to be discussed, including with the US and the Europeans.

Sunak and other leaders, including the IMF’s Kristalina Georgieva, are likely to repeatedly stress the foundations of the G20 in the 2008 economic crisis. The leaders who Sunak meets for the first time will be well aware of the parlous state of the UK’s economy and the turmoil in the Conservative party – not the strongest position for a prime minister to introduce himself on the world stage.

But he will not be alone among those in Bali where domestic economic pressures are the highest on the agenda – the global economy is facing an even tougher scenario than 2008 with a third of the world predicted to be in recession next year.

But with one of its major players behind so much of the turmoil, it is hard to see how leaders can find that renewed sense of purpose for the group.