Republicans try to allay concerns about U.S. aid to Ukraine ahead of Election Day

Republicans try to allay concerns about U.S. aid to Ukraine ahead of Election Day

Last week, Rep. Marjorie Taylor Greene, R-Ga., said at a Trump rally in Iowa that “under Republicans, not another penny will go to Ukraine.” In recent days, senior Republicans in Congress have worked to make it clear that won’t be the case.

In the wake of Greene’s statement and the questioning by other Republicans aligned with former President Donald Trump of the amount of U.S. aid delivered to Ukraine in recent weeks, Sens. Tom Cotton of Arkansas and Rick Scott of Florida went on television to make it clear that Republicans would not waver in their support for the Ukrainians, as the country continues its counteroffensive against Russia’s invasion.

“I think we have to continue to do everything we can to support Ukraine, who wants to defend their freedom and stop Russia from continuing to expand,” Scott said Sunday on NBC’s “Meet the Press” when he was pressed about the GOP’s position after Greene’s statement.

House Minority Leader Kevin McCarthy of California, who hopes to become speaker if Republicans win control of the House this week, worked to clarify his own statement that a GOP-controlled Congress would not provide Ukraine with “a blank check” in its fight. Many viewed the statement as an indication of a new approach if Republicans take over.

“I’m very supportive of Ukraine. I think there has to be accountability going forward,” he told CNN on Sunday, two days before the midterm elections. “You always need, not a blank check, but [to] make sure the resources are going to where it is needed. And make sure Congress and the Senate have the ability to debate it openly.”

McCarthy’s office did not respond to a request for comment.

Rob Portman, the retiring Republican senator from Ohio, traveled to Ukraine with Sen. Chris Coons, D-Del., over the weekend. A key supporter of Kyiv, Portman is a co-chair and co-founder of the Senate Ukraine Caucus and a member of the Foreign Relations Committee. His departure from Congress is seen as a potential blow for Ukrainian support.

He emphasized in a shared statement with Coons that their visit was intended to show that bipartisan support for the country will continue.

“We are here today to underscore the broad support that continues to exist in Congress for the Ukrainian people,” the statement said.

J.D. Vance, the Trump-backed GOP nominee to replace Portman in the Senate, is among the Republicans who have expressed skepticism about the U.S.’s continued support for Kyiv, along with Fox News host Tucker Carlson and Trump himself. 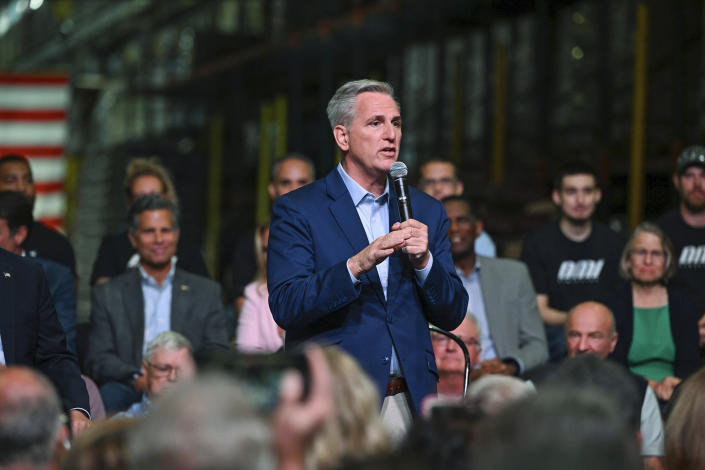 Yuriy Saks, an adviser to Ukrainian Defense Minister Oleksii Reznikov, said Monday that he hoped the results of the U.S. election would not affect the country’s continued support of Ukraine.

“Overall we hope that the bipartisan support of Ukraine, which has been phenomenal so far, will continue regardless of the outcome of the elections in the U.S.,” Saks said. “Our counteroffensive continues, we are pushing back the Russians, and at this stage of the war U.S. bipartisan support is very important.”

The criticism of Ukrainian military and financial aid tends to circle the growing economic crisis in the U.S., and it may be taking hold with voters. Nearly half of Republicans, 48%, believe the country is sending too much support to Kyiv, according to a Wall Street Journal poll released last week. That is up from 6% in March.

Aid has continued in the meantime. The Biden administration on Friday announced an additional $400 million security assistance package for Ukraine, which would include HAWK air defense missiles, tanks, military drones, armored boats and vehicles and much more.

NBC News has reported that lawmakers aim to lock in billions of dollars of military assistance before new members who may be skeptical of Ukraine aid are sworn in, which could be passed during a lame-duck session of Congress if necessary.

Senior Republicans in Congress said that kind of assistance should continue, but they continued to emphasize that more oversight — similar to what was maintained in previous costly conflicts — is necessary. Congress required the Defense Department to maintain the office of the special inspector general for Afghanistan reconstruction, which provided oversight authority during the U.S. war in Afghanistan, for example.

“I don’t want to end up in a war with Russia. If we don’t continue to help Ukraine the right way — we can’t waste our dollars — then they’re going to be in Poland or some other country, where we will be at war because they’re part of our NATO alliance,” Scott said Sunday.

This article was originally published on NBCNews.com