Vladimir Putin has been “weakened” by the invasion of Ukraine but the world should not expect a leadership change in Moscow “anytime soon”, Western officials believe.

The Russian military has suffered a series of humiliating blows on the battlefield in recent weeks, with the momentum behind Ukraine’s armed forces heading into the winter.

But it comes amid concerns among some in the West Mr Putin may resort to nuclear weapons as hopes of an easy victory remain out of reach.

Western officials believe while Mr Putin has been weakened, with reports of a growing unhappiness in relation to the conflict, there is little doubt the war will continue to drag on. 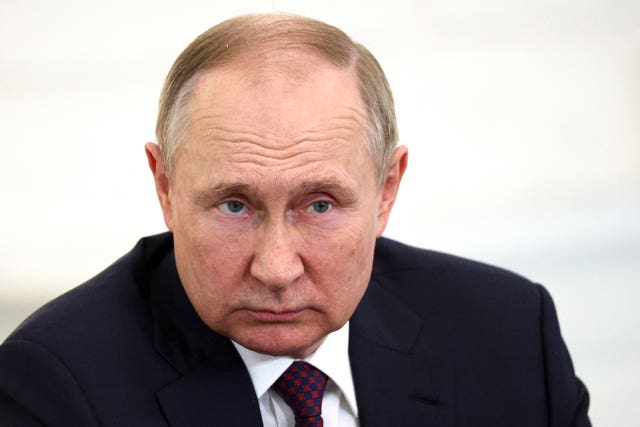 “This is going to continue to be a long, difficult bloody conflict,” a western official said.

Western officials have not yet seen signs Mr Putin has a “plan B” as most of the wider world continues to side with Ukrainian President Volodymyr Zelensky and his government.

His “error” in invading Ukraine has damaged the Russian leader internally, western officials suggested, with reported concerns among some elites about the impact of the war.

A western official said of the war: “He’s been weakened by this really catastrophic error.”

Internally, people in Russia are “talking more about what comes next” and are “imagining a life beyond”.

The illegal and unprovoked invasion of Ukraine is continuing.

Find out more about the UK government's response: https://t.co/RHc7VDQnPW

However, officials said this is not going to happen “anytime soon” with no “likely prospect of change in the near future”.

At the moment, western officials believe Mr Putin is getting “better information” about the war than he had several months ago, but may still not be getting the “unvarnished truth”.

Separately, the UK Government confirmed earlier business associates of Roman Abramovich will be among the latest Russian oligarchs to have sanctions imposed on them.

Foreign Secretary James Cleverly confirmed on Wednesday the Government is sanctioning four new Russian oligarchs, accusing them of being involved in industries helping to prop up the Russian military amid the ongoing war in Ukraine.

Alexander Abramov and Alexander Frolov, believed to be associated with former Chelsea football club owner Mr Abramovich and previous owners of major stakes in Russian steel manufacturer Evraz, are among those sanctioned.

The pair are believed to have an estimated global net worth of £4.1 billion and £1.7 billion respectively, with the Government suggesting they have UK property investments worth £100 million.

Putin continues to rely on his cabal of selected elite to maintain control and fuel his illegal invasion of Ukraine. We are sanctioning four oligarchs who rely on Putin for their positions of authority and wealth and in turn fund his military machine. https://t.co/HH5GIKePNy

Mr Shaimiev is CEO of Russian transport and construction company OAO Tatavtodor, while Mr Shigabutdinov is the boss of the AO TAIF group, which owns around 96% of chemical and petrochemical processing in the Tatarstan region of Russia.

All four will face a travel ban, asset freeze and transport sanctions.

Mr Cleverly said: “Putin continues to rely on his cabal of selected elite to maintain control of his industrial complex and fuel his illegal invasion of Ukraine.

“Today we are sanctioning an additional four oligarchs who rely on Putin for their positions of authority and in turn fund his military machine.

“By targeting these individuals, we are ramping up the economic pressure on Putin and will continue to do so until Ukraine prevails.”

Around 1,200 people and 120 entities have been sanctioned by the UK Government in total.