Since Sunday, world leaders and their hordes of advisers have been gathering in Sharm el-Sheikh, Egypt, for the 27th meeting of the UN’s main climate change conference.

But, ahead of the summit, organisers confirmed that Xi Jinping, the powerful leader of the world’s most populous country, would not attend. It is an absence that undermines the climate negotiations, given that the global battle against climate change hinges heavily on the biggest emitter kicking its fossil fuel addiction.

Xi’s no-show also highlights the dire state of China’s relations with the US and its allies in the west. Climate talks were, until recently, a rare bright spot — even between Washington and Beijing.

However, geopolitical tension has increased dramatically in the past year, fuelled by China’s aggressive stance on Taiwan and refusal to condemn the Russian invasion of Ukraine, as well as US president Joe Biden’s rallying of allies against China’s rise and denial of access to critical technologies.

Despite that backdrop, however — and perhaps because of it — there are signs that China will meet Xi’s key climate change promises.

His targets include hitting peak coal consumption around 2025, followed, five years later, by reaching peak carbon emissions. Also, by 2030, China has promised to reduce carbon emissions per unit of GDP — its carbon intensity — by around two-thirds compared with 2005 levels. By 2060, it will become carbon neutral, meaning cutting its carbon dioxide emissions to nearly zero. 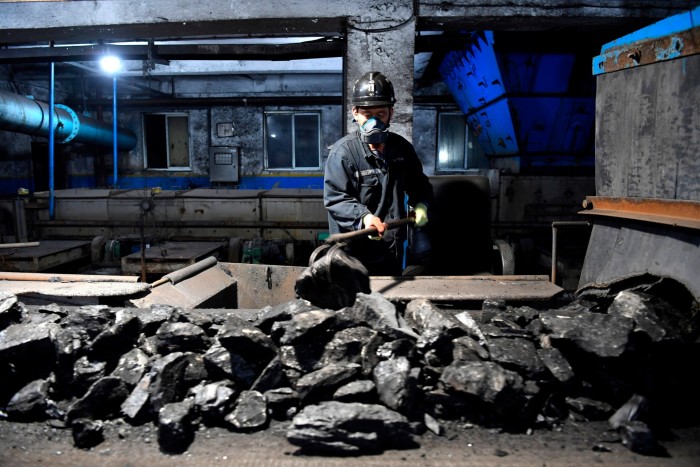 A worker sorting fuel at the Qianyingzi coal mine in Suzhou, Anhui Province © Han Xu/Xinhua via AP

To do all that, the challenge ahead for Xi and his top lieutenants is immense. China accounts for about 30 per cent of global greenhouse gases and fossil fuels make up 85 per cent of the country’s energy mix. The World Bank estimates that $14tn of investments are needed in power and transport to achieve the carbon neutrality goal.

Over the past two years, though, most international commentary on China’s climate change performance has focused on signs of backtracking on commitments.

Beijing has doubled down on coal and gas in response to domestic energy crises. Last year, central China was hit by severe floods followed by crippling power shortages in key manufacturing hubs. This year, there has been a record heatwave in the country’s south and pressure from rising commodity prices after Russia’s invasion of Ukraine.

Many are now concerned that, as growth slows in the world’s second-biggest economy, Xi will further revert to cheap energy production — namely coal — to arrest the decline.

But Sophie Lu, a China director with research firm Rhodium Group, warns against the “misconception” that Beijing’s responses to short-term inflationary and energy stability problems reflect a U-turn on its climate change commitments.

Lu says that longer-term metrics across emissions, emissions intensity and coal power generation, as well as the installation of new coal-fired power plants, appear to be heading in the right direction in 2022.

“What the international climate community is disappointed with is that China did not immediately go to zero new coal build from 2020 onwards,” she says. “It is a fair criticism that China could and should be building less new coal earlier. But what we need to remember is, Xi never promised this. That was never the plan.”

In a review of the first year since Xi unveiled his carbon neutrality pledge, China Dialogue, an NGO, noted that carbon intensity fell 3.8 per cent in 2021 compared with GDP growth of 8.1 per cent. While coal use has nudged higher again, investments in solar, hydro and wind have boomed.

With Xi having just secured an unprecedented third five-year term as head of the ruling Communist party — stacking the top echelons of the party-state with loyalists — his central focus, many China watchers believe, will be ensuring security while avoiding economic and external shocks.

This is underpinning a drive towards energy independence and shifting from fossil fuel imports to domestically produced renewables. Xi’s industrial policy, Lu says, is “core” to China meeting its carbon commitments.

“It’s all about transitioning the country in a steady and orderly fashion away from low value-added heavy industries . . . and transitioning China into newer, ‘strategic’ industries which are mostly lower in emissions intensity.”

Around the world, environmentalists hope that public outcry over the gathering pace and intensity of natural disasters attributed to climate change will force governments to take bolder action to cut emissions.

Even in China, where public discourse and online debate is ruthlessly controlled by Beijing, ignoring the obvious is becoming harder to do.

Li Shuo, Beijing-based policy adviser for Greenpeace, says there has long been a reluctance among the tightly controlled state media to “connect the dots” between extreme weather events and government policy. “There is just such a strong hesitance to highlight anything that is beyond the control of the regime,” Li says.

However, as the frequency of such events increases so too will pressure on Beijing to act.

Li points to last year’s Henan floods. More than a year’s worth of rain fell in 24 hours. Nearly 400 people were killed, and direct economic damage was estimated at just shy of $20bn. “If you have such a situation, can you not afford to ask why?”