Opposition leader Peter Dutton has called on President Vladimir to apologise and supported the Albanese government’s ongoing push to get justice for the 38 Australians killed in the MH17 plane crash.

Malaysia Airlines flight MH17 was shot down by Russian-made missiles over eastern Ukraine eight years ago and killed 298 people - 80 children - from 17 countries including Australia, Malaysia, the UK and Belgium.

A Dutch court concluded on Thursday that the missile had been deliberately fired to bring down the plane, however, the three men deemed responsible had to be convicted of mass murder in absentia as they hid in Russia.

“We should never stop that fight for justice and the work that was undertaken initially from the Australian Federal Police from ASIO… really should be applauded and that work goes on,” he said on Sunday morning.

“There is an opportunity potentially, to extradite people or to arrest them. There are different angles and options that can become available over time.

“I'd love to say that those people can be brought into custody and the justice could be done now but of course that's not the reality.”

The Liberal party leader expressed sympathy for the families reliving the “senseless attack” and joined calls for President Vladimir Putin to show “a shred of decency” by extraditing the men. 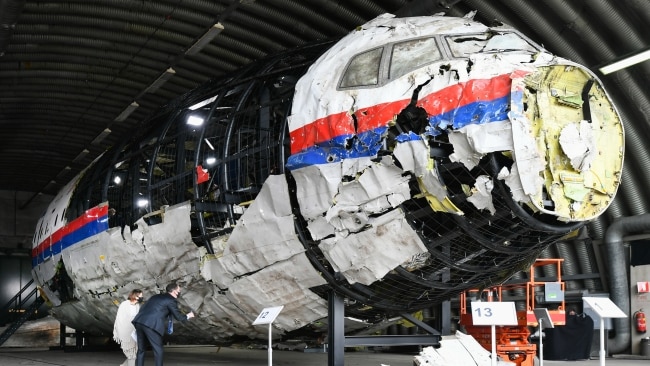 “If Putin had a shred of decency to him, that he would be giving these people up and would be offering an apology but of course he's not,” he said.

“And we see his conduct and his character on full display in relation to Ukraine at the moment.”

Mr Dutton’s strong stance comes as Foreign Minister Penny Wong maintained pressure on Russia after the verdict was handed down and called on Mr Putin to extradite the three men.

"We call on Russia to surrender those convicted, so they may face the court sentence for their heinous crime," she said. President Vladimir Putin has been urged to extradite the Russians involved in the attack so that justice can be served. Picture: Mikhail Metzel/AP "That these people could decide to down a civilian aircraft... with children on it is beyond words.”

Russia has always denied it was involved and has suggested alternative theories blaming Ukraine, including that a Ukrainian jet brought the Boeing 777 down.

The international investigation debunked the theories and proved it was a Russian-made and supplied anti-aircraft missile fired towards the plane from the ground in eastern Ukraine.

The three convicted men will unlikely face any prison time as Russia is not expected to hand the criminals over and the fourth suspect, Russian Oleg Pulatov, was cleared of all charges.