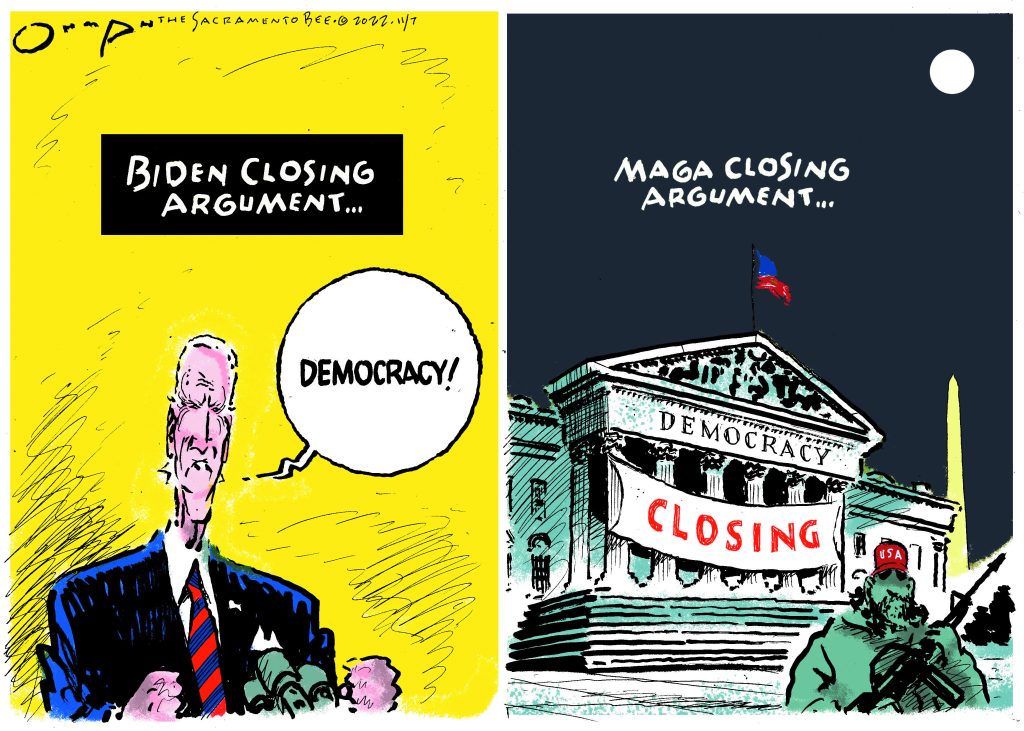 “We have won a huge vote of confidence from the people of Israel.”
– Binyamin Netanyahu hailing the election results that give him a clear path to forming a government, and pledging to be “everyone’s prime minister,” November 2.

“The struggle was not political; it was over Torah values and halachah in Israel. It was about our legitimacy, our roots and traditions. In this clear, decisive victory, the people said that they are not with them. We shall return what was stolen from us, fix what was damaged, and bring chayei haTorah to the Jewish people.” – United Torah Judaism MK Uri Maklev, in post-election remarks, November 2.

“The election results are a disaster for Meretz, a disaster for the country, and yes, a personal disaster for me too.”
– Meretz chief Zehava Galon, who came out of political retirement to retake the leadership in July, only to lead it to oblivion, as it failed to make the electoral threshold, The Times of Israel, Nov. 3.

“The Biden administration doesn’t have a good history of relations with Netanyahu, and if he takes on these far-right extremists into his government and into his cabinet, then I think we’re in for a rocky road.”
– Former U.S. ambassador to Israel Martin Indyk, referring to the Religious Zionism party, Israel’s Channel 12, Nov. 2.

“The undemocratic campaign that the Israeli left is conducting continues. We know very well who in Israel is seeking to incite the Americans to interfere in Israeli democracy, and what their interests are.”
– The Otzma Yehudit faction of the Religious Zionism party, in a statement, Nov. 2.

“It is a milestone for Russia’s deception and lies. And the world sees it.”
– U.S. Ambassador to the U.N. Linda Thomas-Greenfield, just prior to a Security Council vote rejecting 2-3-10 Russia’s call for a probe into its claims that Ukraine and the U.S. are carrying out “military biological” activities in Ukraine, AP, Nov. 2.

“[It is] the fastest, largest displacement witnessed in decades.”
– Filippo Grandi, who heads the United Nations High Commissioner for Refugees, on his estimate that some 14 million Ukrainians have been made refugees since Russia invaded 8 months ago, and raising the global figure to 103 million, AP, Nov. 3.

“The very fact that Russia has resorted to terror against the energy sector indicates the weakness of the enemy. They cannot defeat Ukraine on the battlefield and therefore they are trying to break our people in this way.”
– Ukrainian President Volodymyr Zelensky as about 4.5 million consumers across the country were suffering power outages due to Russian bombings of the infrastructure, CNN, Nov. 4.

“We gave a limited number of drones to Russia months before the Ukraine war.”
– Iranian Foreign Minister Hossein Amirabdollahian after months of denials and obfuscations, AP, Nov. 5

“If you’ve got election deniers serving as your governor, as your senator, as your secretary of state, as your attorney general, then democracy as we know it may not survive in Arizona. That’s not an exaggeration. That is a fact.”
– Former President Barack Obama at a campaign rally in Phoenix, Politico, Nov. 3.

“Sulking and moping is not an option. On Tuesday, let’s make sure our country doesn’t get set back 50 years. The only way to save democracy is if we, together, fight for it.”
– Obama, giving a pep talk to Democrats, in Pittsburgh, AP, Nov. 5.

“We want to frame things so that [Supreme Court Justice Clarence Thomas] could be the one to issue some sort of stay or other circuit justice opinion saying Georgia is in legitimate doubt.”
– Attorney for then-President Donald Trump Kenneth Chesebro, writing in a Dec. 31, 2020, email to Trump’s legal team contending that Thomas would be “our only chance to get a favorable judicial opinion by Jan. 6, which might hold up the Georgia count in Congress” and derail the Biden victory, from documents just revealed by the committee investigating the Capitol riot, Politico, Nov. 2. 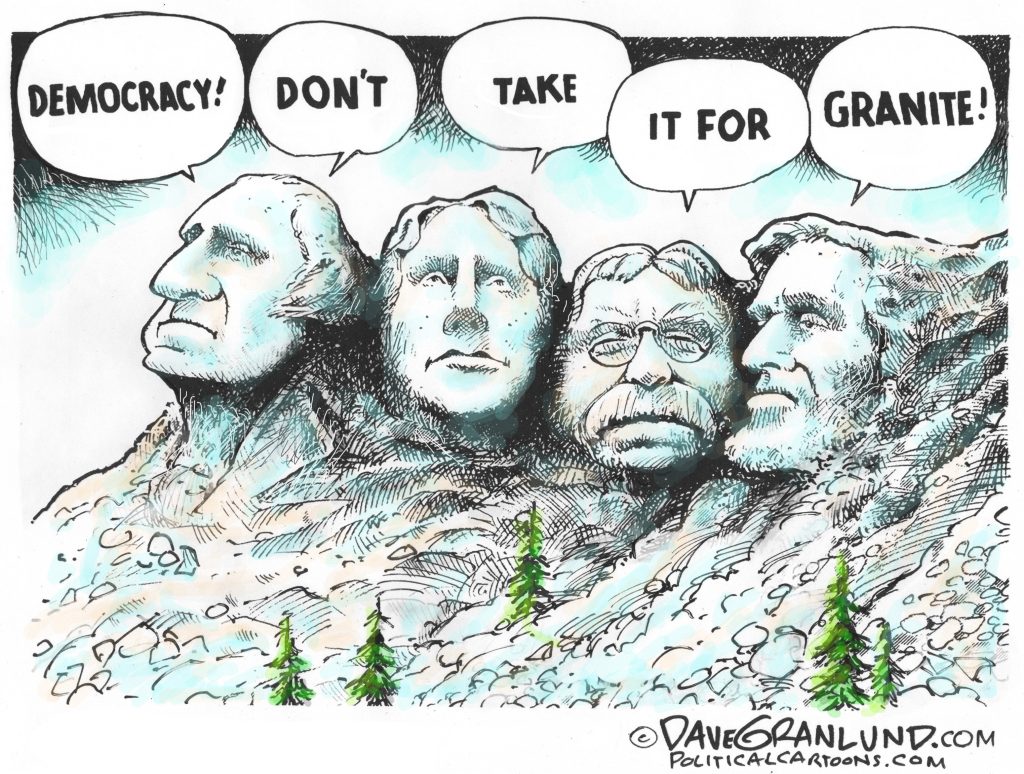 “It concerns me when the motivation to serve as a poll worker is fueled through misinformation and people who have been fed lies, in some cases, for years now. Since the spring, clerks have come at us with concerning questions they’re getting and in some cases, hundreds of poll worker applications that seem to be motivated by nefarious intent.”
– Michigan Secretary of State Jocelyn Benson, a Democrat, amid recruitment of poll workers by groups promoting election conspiracies, AP, November 2.

“If you’re angry, fed up and fearful of a repeat of the horror show of November 2020, then this is one way you can help.”
– The Oakland County GOP website urging people to sign up as poll workers, Ibid.

“Part of me hopes all the crazies do win.”
– Former Gov. Christine Todd Whitman (R-N.J.), who explained that maybe then Americans will realize the consequences before 2024. But, she said, “then I realize no, I don’t want to live in that world and I don’t want to leave it for my grandkids either, the damage they can do,” Axios, Nov. 2.

“Woke culture — it’s one reason why the Republicans are going to do so well in this election. The left has gone super crazy with lots of [things] that the average American just never voted for, doesn’t recognize in this country, doesn’t want … Things are going to change fundamentally in this country after this election.”
– Comedian Bill Maher, making a serious prediction, Fox News, Nov. 5.

“No one is building new coal plants because they can’t rely on it, even if they have all the coal guaranteed for the rest of their existence of the plant. So it’s going to become a wind generation. We’re going to be shutting these plants down all across America and having wind and solar.”
– President Joe Biden in a speech in San Diego, Politico, Nov. 4.

“This is something the President has never said to me. Being cavalier about the coal jobs for men and women in West Virginia and across the country who literally put their lives on the line to help build and power this country is offensive and disgusting. The President owes these incredible workers an immediate and public apology and it is time he learn a lesson that his words matter and have consequences.”
– Sen. Joe Manchin (D-W.Va.), Ibid.

“Seniors are getting the biggest increase in their Social Security checks in 10 years through President Biden’s leadership.”
– The White House in a Twitter post, subsequently deleted after the social media platform added a “context” note pointing out that the increase was tied to a 1972 law requiring automatic increases based on cost of living changes, Politico, Nov. 2.

“Look, the tweet was not complete. Usually when we put out a tweet we post it with context, and it did not have that context. So in the past we’ve pointed out that for the first time in over a decade seniors’ Medicare premiums will decrease even as their Social Security checks increase. That’s a little bit of context that was not included.”
– White House Press Secretary Katrine Jean-Pierre, Ibid.

“I’m from El Salvador, a third-world country in Central America, and I myself see cities here and say I wouldn’t live here. That would be unthinkable three decades ago, that a Salvadoran wouldn’t want to live in a U.S. main city.”
– El Salvador President Nayib Bukele, whose country’s homicide rate has dropped 75% since he took office in 2019, referring to Los Angeles, San Francisco, Philadelphia, Baltimore, New York and Chicago, Fox News, Nov. 5.

“At a minimum, this is an untraditional approach. It’s iconoclastic, it’s unusual, it’s not what everybody would do — but I don’t really fault him for it.”
– Joel Peterson, former chairman of JetBlue Airways, who has served on dozens of corporate boards and advised chief executives across industries, on Elon Musk’s firing of a slew of top executives right after taking over Twitter, Wall Street Journal, Nov. 6.