Olaf-Xi meeting: The tale of two losers scratching each other’s back

Olaf-Xi meeting: The tale of two losers scratching each other’s back

Olaf Scholz’s days as a political strongman are nearing their end. His coalition is fighting like cats and dogs, and the present coalition government can fall anytime now. Furthermore, a devastating de-industrialization is about to unfold in Germany. Germany has in the past sided with the west and the EU. Olaf Scholz, however, has grown enough guts to take a new path. This week, Olaf Scholz arrived to meet with Chinese President Xi Jinping, although they are saying it is for bilateral cooperation, but anyone can sense that, this gathering is nothing more than a meeting of two losers.

This week, the German Chancellor Olaf Scholz arrived in China to give a strong message to the world, that trade with the second-largest economy in the world must continue. Reportedly, Scholz had a meeting with Chinese President Xi Jinping at the Great Hall of the People before being welcomed by Premier Li Keqiang. 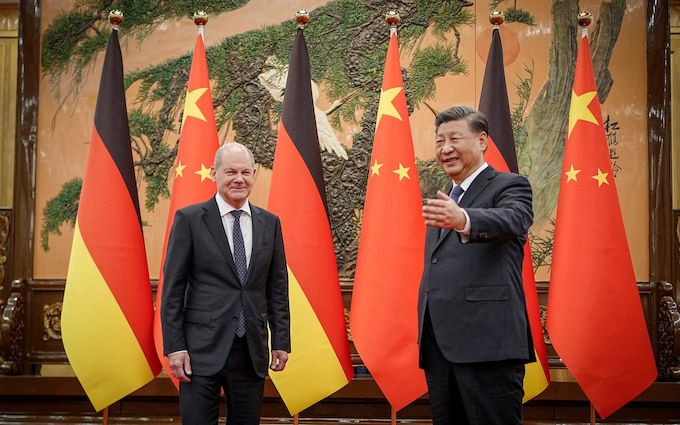 Along with Olaf, the CEO of Twelve German businesses, including the CEOs of Volkswagen (VLKAF), Deutsche Bank (DB), Siemens (SIEGY), and chemicals giant BASF (BASFY), also arrived in Beijing. The business tycoons had private meetings with Chinese companies to expand business relations with China.

Because Scholz was the first western politician to recognize the Chinese dictator’s third term, Xi was very happy to meet him. But it’s important to note that the meeting between the two leaders was more personal and transactional rather than a general country-to-country bilateral talk. It is a no-hidden fact that Chinese citizens are not at all happy after Xi’s triumph for the third term. Xi was welcomed with a blood bath in the stock exchange when he was confirmed as President for the third term.

And why not, for the last three years, Xi has wreaked havoc on the China’s economy with his non-sensical Zero-covid policy and other policies threatening the confidence of foreign investors. Further, the appointment of his close men in Politburo rather than experienced economists has further intimidated the investors. Before Covid-19, Xi predicted that the country’s GDP and GDP per capita would have doubled by 2035. But, the businesses are now running away, and hence, China’s ‘pipe dream’ to be an economic superpower is falling flat with it. However, with the help of Olaf, Xi is looking to regain the lost ground.

A barren land to sow seeds

Germany’s economic woes are ideal circumstances for Xi to control Europe and use Olaf as his puppet in the west. Even Scholz is interested in doing so because he has become one of the most unpopular leaders in Germany due to his non-sensical approach in the Ukraine war, which has pushed the entire Germany into chaos.

Olaf’s devious efforts to jump into the hellfire of Ukraine have pushed the largest economy in Europe to the brink of recession. He has been criticized for lacking sufficient leadership. Scholz was one of the first European leaders to impose an embargo on Russia, including restrictions on the import of gas. He also halted the certification of the newly built Nord Stream 2 pipeline project, which was supposed to bring gas from Russia. According to a poll released, 62% of Germans are now dissatisfied with Mr. Scholz’s job as the German Chancellor, up from 39% in March. Furthermore, Scholz’s fall is helping his coalition partners like the Greens gain ground in Germany.

Time has made it necessary for Xi and Olaf to scratch each other’s backs. The German Chancellor thinks that cooperating with China will help him recover from his crumbling popularity, while Xi thinks that meeting with Olaf will give him a new touch of credibility. But in all honesty, this gathering is nothing more than a get-together of losers without a plan.