A missile that hit a Polish village close to the Ukrainian border was probably fired by Ukrainian forces defending against a Russian missile onslaught, Poland’s president has said.

Andrzej Duda said the hit, which killed two people on Tuesday evening, was not an attack on his country by Russia and there is a “high probability” Ukrainian defence forces were involved.

Earlier, Rishi Sunak, attending the G20 summit in Bali, joined other western leaders in condemning Moscow’s latest barrage against Ukraine’s infrastructure, which they said was the ultimate cause of the blast.

Mr Duda said: “We have no proof at this point to suggest the missile was fired by the Russian side.

“Ukraine’s defence was launching their missiles in various directions and it is highly probable that one of these missiles unfortunately fell on Polish territory.

His comments were echoed by Nato secretary general Jens Stoltenberg, who said a “preliminary analysis” suggested it was a Ukrainian air defence missile fired to defend against Russian cruise missile attacks.

Speaking after a meeting of alliance ambassadors in Brussels, he added: “But let me be clear, this is not Ukraine’s fault.

“Russia bears ultimate responsibility as it continues its illegal war against Ukraine.” 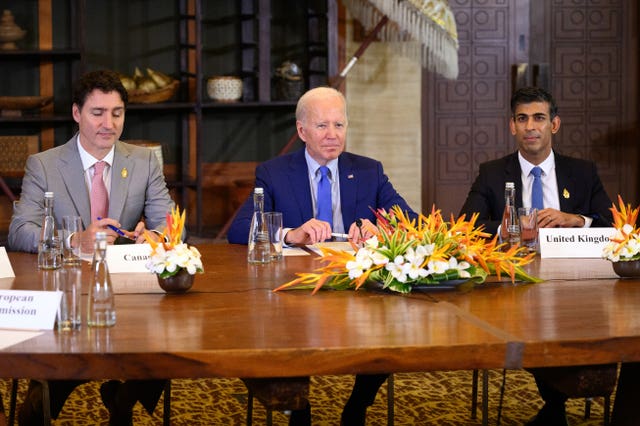 The likely attribution of the hit to Ukrainian defence forces will ease some of the tensions which arose in its immediate aftermath.

A deliberate attack on Poland, which is a Nato member, would have required a joint response by the alliance, raising the risk of war with Russia.

However, speaking at the end of the Bali summit, Mr Sunak said the incident came on a day when Russian fired more than 80 missiles against civilian infrastructure in Ukraine.

“That was happening at a time when the G20 was gathered, trying to find resolution to some of the world’s challenges, and the same time (Russian President Vladimir) Putin was raining down indiscriminately that volume of missile attack,” he said.

“I think it shows utter contempt for the international rules-based system.”

Mr Duja said it was “most probably a Russian-made missile” which struck the village of Przewodow ain an area where grain was being dried.

The news of the strike prompted US President Joe Biden to summon a meeting of G7 and Nato leaders present in Bali – including Mr Sunak – amid fears of a serious escalation.

The Ukrainian leader condemned the hit as “a very significant escalation” of the war against his country by Russia, but Moscow vehemently denied any involvement in the incident.

The Russian defence ministry claimed it was a “deliberate provocation” intended to escalate the conflict.

Kremlin spokesman Dmitry Peskov said: “We have witnessed another hysterical, frenzied, Russophobic reaction that was not based on any real data.”

Mr Stoltenberg said the incident underlined the dangers of the continuing war in Ukraine,” he said.

“We are constantly assessing our presence in the eastern part of the alliance.

“I think this demonstrates the dangers connected to the ongoing war in Ukraine but hasn’t changed our fundamental assessment of the threat against Nato allies.”