French President Emmanuel Macron’s idea the West should consider how to address Moscow’s need for security guarantees to end the war in Ukraine has drawn sharp criticism from Kyiv and several of the EU’s Russia hardliners.

The comments, made in an interview with French television channel TF1 on Saturday (3 December), came after Macron held talks with US president Joe Biden in Washington, in which both leaders discussed Russia’s aggression in Ukraine and how they can continue to support Ukraine.

“This means that one of the essential points we must address – as [Russian] president [Vladimir] Putin has always said – is the fear that NATO comes right up to its doors and the deployment of weapons that could threaten Russia,” Macron said.

“That topic will be part of the topics for peace, so we need to prepare what we are ready to do, how we protect our allies and member states, and how to give guarantees to Russia the day it returns to the negotiating table,” he added. 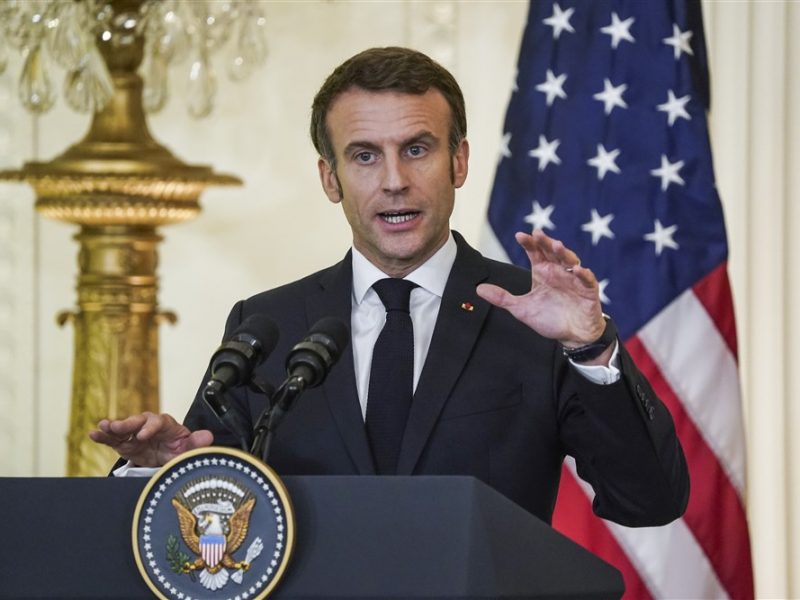 Macron says new security architecture should give guarantees for Russia

The West should consider how to address Russia’s need for security guarantees if President Vladimir Putin agrees to negotiations about ending the war in Ukraine, French President Emmanuel Macron said in remarks broadcast on Saturday (3 December).
In an interview with …

Meanwhile, Biden’s comments on Thursday that he would be open to diplomacy with Russia’s President Vladimir Putin on the war in Ukraine may have been more about signalling Western solidarity and shoring up the US relationship with France than about entering into an imminent dialogue with Russia.

“I’m prepared to speak with Mr Putin if there is an interest in him deciding he’s looking for a way to end the war,” Biden said Thursday. “He hasn’t done that yet.”

German Chancellor Olaf Scholz on Thursday (1 December) suggested Europe should return to the pre-war “peace order” with Russia and resolve “all common security issues” if Putin would be willing to renounce aggression against his neighbours.

Ukrainian officials, meanwhile, immediately rejected Macron’s idea the West should consider how to address Russia’s demand for security guarantees if Moscow agrees to negotiations about ending the war.

Oleksiy Danilov, secretary of the Ukrainian National Security and Defense Council, on Sunday (4 December), questioned providing such guarantees “to a terrorist and killer state.”

“Instead of Nuremberg — to sign an agreement with [Russia] and shake hands?” Danilov tweeted about trials of Nazi war criminals after World War II.

“Ukrainian blood on Putin’s hands will not bother business as usual?” he wrote.

Mykhailo Podolyak, an adviser to the office of Ukrainian President Volodymyr Zelenskyy, said the same day that instead of guarantees to Moscow, the world needs security guarantees “from the barbaric intentions of post-Putin Russia.”

However, Podolyak added, this will be possible only after war crime tribunals, the convictions of officials responsible for the war on Ukraine, and the imposition of reparations.

It is the second time in nine months that a discussion about potential negotiations to end the war has caused bad blood between Paris and Kyiv.

In May, Zelenskyy had suggested Macron asked Ukraine to make concessions on its sovereignty to help Putin save face. However, back then, the Elysée denied the Ukrainian allegations.

Before the invasion, Putin said at a joint press point with Macron in Moscow that Russia would aim to obtain replies from the West to its main three security demands.

These include stopping any future NATO enlargement, no missile deployments near its borders, and a scaling back of NATO’s military infrastructure in Europe to 1997 levels.

However, back then, the US and its Western allies called the Russian demands “non-starters”.

Many in Ukraine and the West have voiced strong opposition to negotiations with Putin that would reward Russia with concessions, especially after Kyiv, in a recent military campaign, has managed to drive back Russian forces from large areas in the past three months.

Likewise, Ukraine’s Western allies, including the US and France, repeatedly stated that it would be up to Kyiv to decide on the terms the country would accept.

Not only hawkish member states but many Russian experts have previously accused the French president of being soft on Moscow after his statements that the West “should not humiliate Russia” over the war as it would still remain a neighbour to deal with after its ending.

“The tactic of leaving Russia undefeated and ready for future partnership is toxic” as it would “lead to calls to end the war by negotiation instead of ending it with a Ukrainian victory,” Lithuania’s foreign minister Gabrelius Landsbergis said in a Twitter thread.

After Russia’s defeat, Landsbergis said, the current security architecture of multilateral regional and global organisations will have to change.

“Our strategy must be rethought and reflected in a new security architecture that would ensure the continent’s security for decades to come – and we should start creating this new system together with Ukraine, not with Putin’s Russia,” Lithuania’s foreign minister said.

Meanwhile, Latvia’s deputy prime minister, Artis Pabriks, told the Financial Times on Sunday (4 December) that “the idea that the Russian invasion [of] Ukraine can be ended by the West giving security guarantees to Russia is falling into the trap of Putin’s narrative that the West and Ukraine are responsible for this war and Russia is [an] innocent victim.”

Macron’s comments also triggered a response in Sweden and Finland, which both had dropped their military neutrality and applied for NATO membership earlier this year due to the Russian invasion of Ukraine.

Sweden’s Foreign Minister Tobias Billström said he notably agreed with Landsbergis “on the need to defeat Russia on the battlefield and help Ukraine achieve victory”.

“The only security guarantees we should focus on are essentially non-Russian,” he tweeted, adding that “Russia needs first to guarantee that it does not attack others. Only then can we begin discussions on European security.”

Related News
Macron’s idea of ‘security guarantees’ to Russia faces backlash
What is Zelenskiy’s 10-point peace plan?
Putin tells Macron Hiroshima is proof ‘you don’t have to launch nuclear strike on major city to win war’
Macron seeks direction
Volodymyr Zelensky: We will do everything to give people electricity and heat, but Russia will do everything to destroy normal life
Diplomacy must go hand in hand with military support for Ukraine
Opinion | Don’t let Putin fool you — an aggressor can’t be a peacemaker
Day 253 of the Invasion of Ukraine: When will Russia use Nuclear Weapons?
Is revolution brewing in France?
MEPs mull declaring Russia a terrorist state over 'brutal and inhumane' crimes against Ukraine
Russia-Ukraine war: Experts looking at India's possible role in brokering peace between 2 warring nations
The uncomfortable need to talk about diplomacy with Russia
Latest News
Germany's Scholz sets off on first South American tour to boost trade, environment ties
Expresso News Highlights of the week
German, US promises of tanks spark concerns of escalating Russia-Ukraine conflict
Czech retired general aims to beat tycoon ex-PM in presidential race
jokovic shrugs off dad drama to reach 10th Australian Open final
Department Press Briefing – January 27, 2023
AP Top News at 4:59 p.m. EST
The West versus the Rest
‘A Thousand and One’ wins Sundance grand jury prize
AP Top News at 1:57 p.m. EST
AP Top News at 2:03 p.m. EST
Novak Djokovic says his father had 'no intention whatsoever to support any kind of war initiatives' – KION546
What Sank H&M’s Profits
AP Top News at 10:58 a.m. EST
House GOP moves to restrict presidential use of US oil stockpile