Dr. George Trajtenberg has already made his mark as a surgeon in Philadelphia. The West Chester resident founded the Chester County Surgical Associate in 1982 and worked with Surgical Specialists, P.C. in Chester County until 2013 when he retired from active private practice.

After more than 30 years in the practice, Trajtenberg, 70, still hasn’t hung up his scrubs. For the past 12 years, he and a team of 20-30 surgeons he assembled have traveled to clinics in La Entrada and Comayagua, Honduras a couple of times a year, providing necessary operations to the patients there, sometimes 80-120 in a week.

The Kesher Israel Congregation member was doing similar missions outside of Port-au-Prince, Haiti, but stopped due to the ongoing social and political crises in the country, which has all but eliminated travel there from the U.S.

Trajtenberg’s patients are poor and come to the clinic via horse, bus or even by foot. In between trips, Trajtenberg works with surgeons and hospitals as part of Project C.U.R.E to collect surgical supplies, many of which are surplus or would have otherwise been treated as disposable. The clinics with which Trajtenberg works often only supply an operating room or two in the back of the buildings.

An immigrant to the U.S. from Argentina, Trajtenberg sees this work as a way of giving back to the world that has given him and his family good fortune.

“If blessings are money,” Trajtenberg said, “then I’m the richest man in the world.”

Arriving in Philadelphia in 1974, Trajtenberg was 22 and his wife Adriana 19. Though already a graduate of medical school, Trajtenberg was too young to begin a surgical practice in earnest and instead interned at Einstein Health and joined a residency program at the Medical College of Pennsylvania. He moved to West Chester in 1982, the same year he began his practice.

“I did everything I could do to be a good citizen,” he said.

The sentiment extended to his Jewish life. Trajtenberg, who did not have a bar mitzvah ceremony in Argentina, joined KI’s adult bar mitzvah program at age 30. He joined B’nai Brith and BBYO, and his grandchildren attend Perelman Jewish Day School and Jack M. Barrack Hebrew Academy.

Trajtenberg describes his arrival to the U.S. as similar to the 1939 “The Wizard of Oz” film: In Argentina, things were black and white; upon coming to America, everything turned to color.

Growing up in Paraná, despite Argentina being the fifth-most-populous country of Jews at the time, Trajtenberg encountered antisemitism and political unrest. 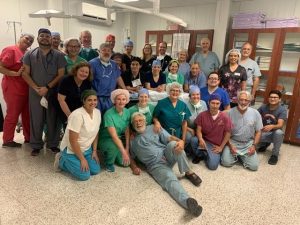 His relatives came to Argentina from all over Eastern Europe — what is now Russia, Ukraine and Romania — in the late 1800s. Paraná had two synagogues, one Ashkenazi and one Sephardic, and though Trajtenberg’s father was secular, Trajtenberg and his two brothers grew up celebrating Jewish holidays and filled with deep Zionism, in large part because of the strong shaliach program his synagogue had.

During Argentina’s Dirty War in the 1970s, Trajtenberg remembered gunshots and fires in the streets. Antisemitism in the Catholic country under heavy policing was particularly prominent then, and both of Trajtenberg’s brother’s made aliyah.

Trajtenberg was taunted by compatriots about the conspiracy that Jews killed Jesus and his so-called dual loyalty — on what side would he fight, should Argentina and Israel go to war?

Though Trajtenberg’s missions to Honduras are a way for him to personally give back to the medical community, he also sees the trips as a chance to open the minds of the younger surgeons he brings along, which has dwindled in numbers over the years.

Trajtenberg often thinks of a Mark Twain quote: “Travel is fatal to prejudice, bigotry and narrow-mindedness.”

A lover of travel, Trajtenberg has visited 65 countries and five continents. His wife is an interpreter of Spanish and English.

Beyond helping his fellow surgeons learn Spanish, Trajtenberg helps organize the missions to open others up to new experiences and people they wouldn’t have otherwise encountered in their bubble.

“The more you travel, the more you intermingle with different people, different nations, different languages, different colors, whatever,” he said. “You become more human. And that’s good for all of us.”