Giorgia Meloni and her cabinet will be sworn in on Saturday, a presidential palace official has announced. It is the first far-right government in Italy since the Second World War.

Ms Meloni's Brothers of Italy - a party with neo-fascist roots - was the top vote-getter in Italy's national election last month, although it did not win enough votes to govern outright.

Mr Berlusconi, a three-time premier, had chafed at the election victory of Meloni's party. The Brothers of Italy took 26%, while Berlusconi's Forza Italia and the anti-migrant League of Salvini won just over 8% apiece in an election with record-low turnout.

A few hours before the new government's formation was announced, Ms Meloni, 45, a career politician, told reporters that she and her allies had unanimously asked President Sergio Mattarella to give her the mandate to govern.

In turn, President Mattarella expressed satisfaction that the government was formed in a "brief time" following the 25 September election. After the last election, in 2018, it took three months for a new ruling coalition to come together.

In that election, Ms Meloni's party had taken just over 4%.

Obtaining the premiership capped a remarkably quick rise for the Brothers of Italy. Meloni co-founded the party in December 2012, and it was considered a fringe movement on the right during its first years. 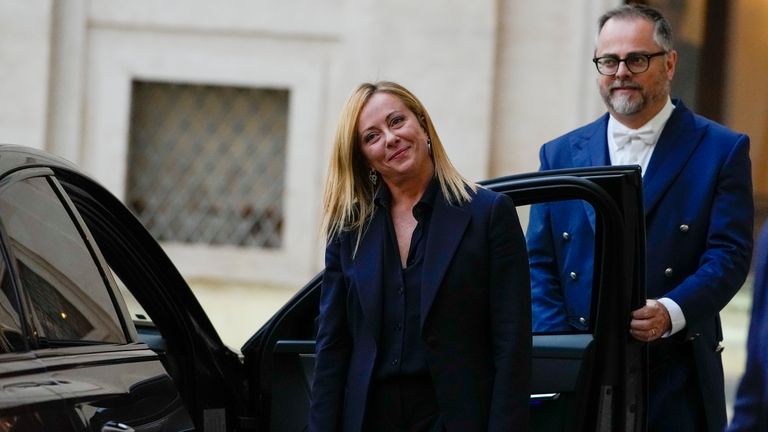 Italy and much of the rest of Europe are struggling with soaring energy costs and the fallout of Russia's war in Ukraine, which could affect gas supplies this winter and continue increasing household and business power bills.

Mr Berlusconi and Mr Salvini are long-time admirers of Russian President Vladimir Putin while Ms Meloni staunchly backs Ukraine in its defence against the Russian invasion.

Those differences could produce challenges for their governing coalition.

During a meeting this week with Forza Italia's lawmakers, the former premier expressed sympathy for Putin's motivation in invading Ukraine. A recording of the conversation leaked to Italian news agency LaPresse also captured Mr Berlusconi bragging that Putin had sent him bottles of vodka for his 86th birthday last month and that he gave the Russian leader bottles of wine while the two exchanged sweetly worded notes. 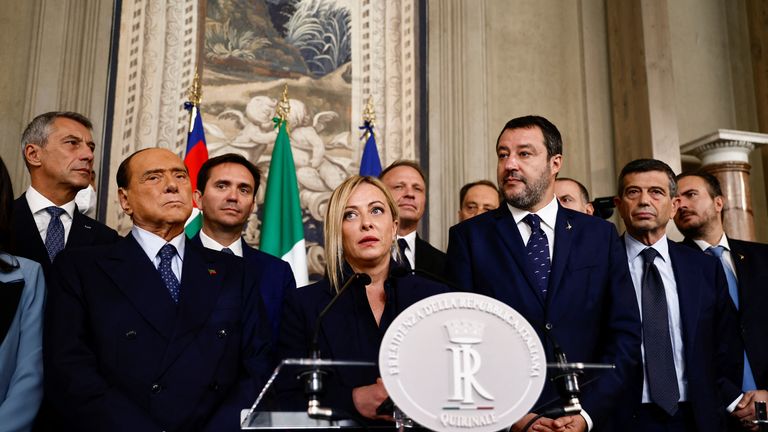 The country's national pandemic unity coalition collapsed in July, after Mr Salvini, Mr Berlusconi and populist 5-Star Movement leader Giuseppe Conte refused to back the government in a confidence vote. That prompted President Mattarella to dissolve parliament and paved the way for an election some six months early.

On Thursday, President Mattarella received opposition leaders, who raised concerns that Ms Meloni, who campaigned with a "God, homeland, family" agenda, would seek to erode abortion rights and roll back rights such as same-sex civil unions.

On Friday, Ms Meloni approached an ultra-conservative Catholic, Eugenia Maria Roccella, to be her minister for family, birthrates, and equal opportunities.

At a 2018 event in Rome that Ms Meloni attended, Ms Roccella pledged to work against Italy's law legalising same-sex civil unions and called same-sex marriage "the end of humanity."