Is Russia withdrawing from Kherson?

Is Russia withdrawing from Kherson?

KYIV — Are they leaving or not?

This is the question onlookers to Ukraine’s eight-month war have been asking about what certainly looks to be a gradual Russian withdrawal from the occupied city of Kherson, a strategic regional capital in Ukraine’s south, although no such military retreat has been announced by Moscow.

Yet on Nov. 3, Ukrainians awoke to a pleasant surprise: Russian checkpoints, previously manned by armed soldiers, were abandoned and the city’s administrative building no longer flew the Russian tricolor. By all outward appearances, it too had been deserted. Three days later, on Nov. 6, a group of Ukrainians confirmed the fact by filming themselves wandering through the ransacked but empty offices and vacant corridors.

Russia certainly appears to be planning to leave the first and only major population center it has managed to seize control of in its eight-month war. For weeks now it has been systematically relocating its civilian occupation forces to the east bank of the Dnipro River, the main water artery that bisects the Kherson district in Ukraine’s commercially vital southern port region, home to about 300,000 before the war. Kherson was one of four regions Russian President Vladimir Putin claimed his government was annexing just over a month ago following a series of illegal and coercive “referendums.” 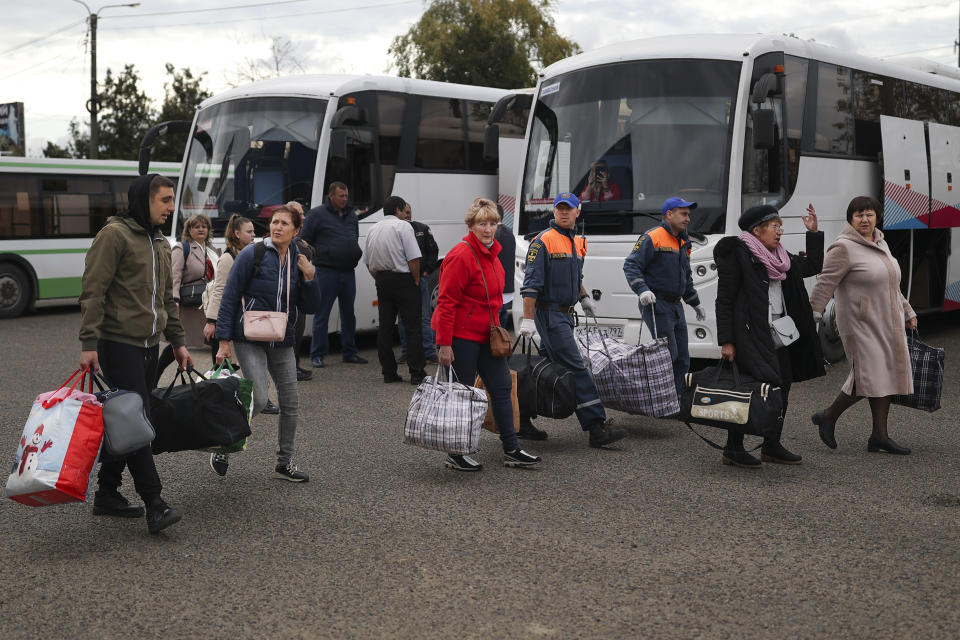 Evacuees from Kherson gather upon their arrival at the railway station in Anapa, southern Russia. (AP Photo)

On Nov. 3, the Russian-installed deputy governor Kirill Stremousov, posted a video insisting that “at the moment, everything is fully under control,” while simultaneously urging all civilians remaining on the west bank of the Dnipro to “evacuate.” As many users on social media pointed out, Stremousov recorded the video pretty obviously mid-flight from the provincial capital, riding in a car clearly filled with enough personal belongings to suggest he wasn’t due back in the near future.

Then, earlier Monday, Stremousov declared the “evacuation” of civilians from Kherson city to more secure Russian turf. “We closed the road from the left bank to the right bank today and we do not recommend returning to the city,” he said in a video posted to his Telegram channel.

Earlier, Putin had only called for the removal of Kherson’s “civilian population” from the “dangerous zone of action.” Yet now reports out of Moscow suggest the Kremlin is seeking to reshape the narrative to account for an imminent loss of major territory, and so soon after a series of stunning defeats to Ukrainian defenders over the past two months.

Further evidence that Russia is preparing for a pullout came Monday by way of the independent, Lithuania-based Russian news outlet Meduza, which obtained copies of two “new manuals for Russian propagandists,” prepared by Putin’s administration. One states that Kherson is “the most difficult for the Russian army at the current stage of the special operation,” and anticipates a massive Ukrainian bombardment campaign. 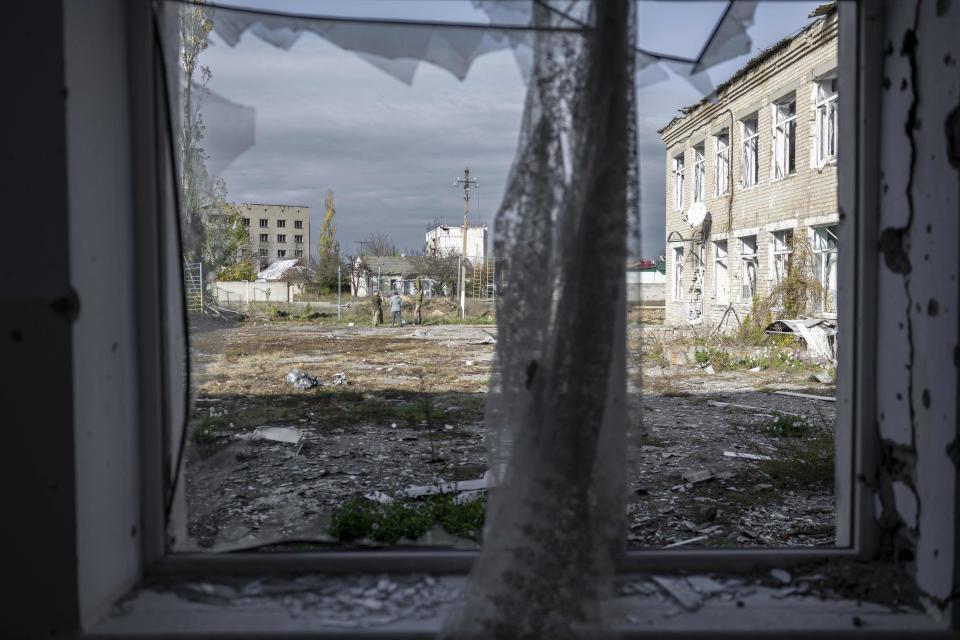 A school in the Kherson region village of Arkhanhelske, which was formerly occupied by Russian forces. (Bulent Kilic/AFP via Getty Images)

More worrisome that the document telegraphs what some fear may be Moscow’s last resort — a massive attack against the region’s civilian infrastructure, choreographed by Russia but meant to blame the Ukrainians.

On Oct. 21, Ukrainian President Volodymyr Zelensky told EU leaders that the Russians had mined the Kakhovka dam at the hydroelectric plant in Kherson, one of the few remaining routes by which Russians can retreat across the Dnipro. Should they blow it up, “more than 80 settlements, including Kherson, will be in the zone of rapid flooding,” Zelensky said. “Hundreds of thousands of people could be affected.” Yet the Kremlin manual insists that Ukrainian forces are planning to “stage a terrorist attack by destroying” the Kakhovka plant, which would incur all the same dire consequences on the surrounding areas.

Ukraine would gain little from such an act, which would gravely harm a host of Ukrainian-held settlements. Even pro-Kremlin newspaper Komsomolskaya Pravda acknowledged that blowing the dam would create a 16-foot wave that within two hours would hit Kherson city, flooding the very terrain Ukraine was looking to retake.

The Russian government often preemptively blames its adversaries for or planning to do what it itself has been preparing.

Perhaps not coincidentally, the publication of the manual comes over a week after Russia’s Defense Minister Sergei Shoigu floated unfounded claims that Ukraine was preparing to unleash a dirty bomb — a combination of conventional explosives and uranium — in a phone call with U.S. Defense Secretary Lloyd Austin. U.S. National Security Council spokesperson Adrienne Watson accused Shoigu of lying, calling such a suggestion a “pretext for [Russian] escalation,” and the U.S., UK and Ukraine have all warned that Shoigu’s allegation could be read as preemptive excuse for Russia’s use of a dirty bomb that could be blamed on Kyiv. 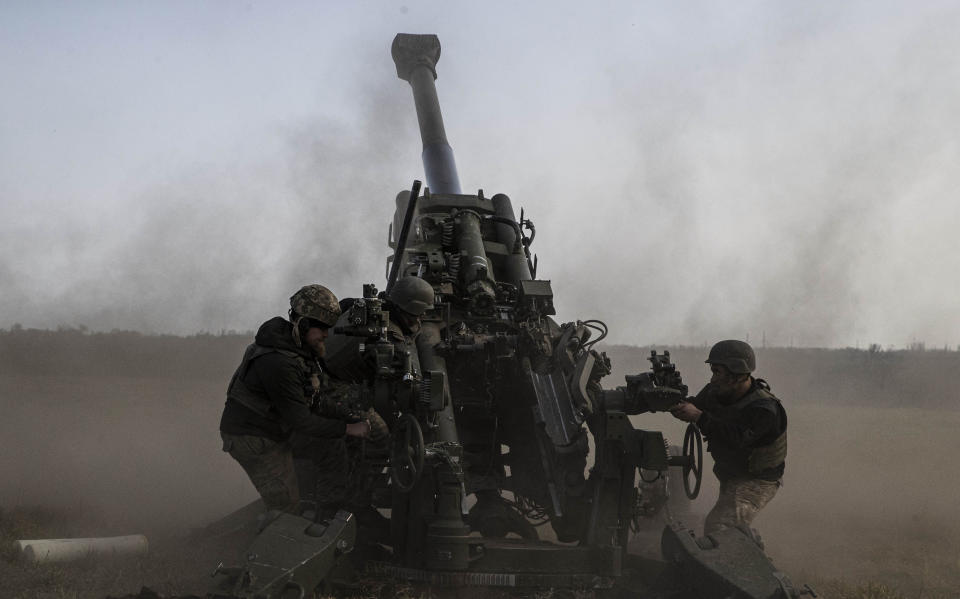 A Ukrainian howitzer targets points controlled by Russian troops as it aims to support to the Ukrainian army in the Kherson district. (Metin Aktas/Anadolu Agency via Getty Images)

Natalya Humenyuk, the spokesperson for Ukraine's Southern Command, urged caution about Moscow’s true intentions. In a televised statement on Nov. 7, she warned the apparent Russian pullback might be a trap; an effort to “create the impression that settlements have been abandoned, and that it is safe to enter them” in order to lure Ukrainians into kill zones. Russian military units were also fleeing the city of Kherson disguised as civilians, Humenyuk alleged. (Yahoo News cannot independently verify this claim.)

She also suggested that Russia has been pouring in large numbers of newly mobilized and poorly trained Russian conscripts to assume the duties on the frontlines in Kherson as units of more experienced regulars migrate across the river to fortify their positions on the east bank of the Dnipro.

What can be visually confirmed is how the Russians are leaving. Videos and photographs depict scenes of rampant looting from Kherson, from everyday items including a children’s train car, to the region’s most prized bits of cultural patrimony. The Russians have driven off with exhibits from the Kherson Fine Art Museum, removing them to the Russian-occupied peninsula of Crimea. Even the animals from the Kherson Zoo were transferred to the Crimean Safari Park.

And in what may yet prove to be a potent metaphor for Putin’s invasion of Ukraine, the Russians also reportedly dug up and absconded with the long-buried corpse of Count Grigory Potemkin. An 18th century Russian commander, Potemkin’s name became synonymous with villages in Crimea that already existed but were falsely attributed to his supposedly enterprising governorship of the region when his patron, Empress Catherine the Great, toured the peninsula in 1787. 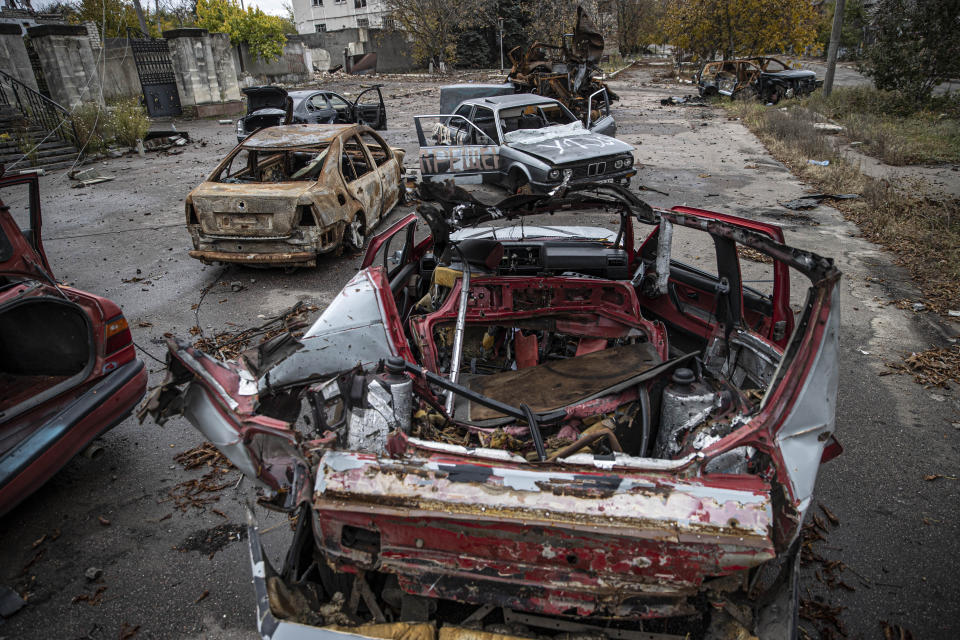 Damaged vehicles at Velyka Oleksandrivka town, located in the Kherson region where control was retaken by the Ukrainian forces. (Metin Aktas/Anadolu Agency via Getty Images)

What the fleeing Russian occupiers didn’t purloin, they often destroyed.

Kherson’s provincial capital is now without water and power. The head of Kherson’s regional administration blamed the Russians for destroying a mile’s length of electric cables in the nearby city of Berislav, where Yaroslav Yanushevychther, the exiled head of Ukraine’s military administration, accused the Russians of also mining water towers.

Petro, one local in the Kherson region interviewed by the New York Times, alleged the Russians “blew up the power poles, so we have no light and no water.”

“They are taking out everything they can, and ruining the rest, like barbarians,” Serhiy Khlan, a member of Ukraine’s military and a local government official, told the Wall Street Journal.

Russian state-media claimed, meanwhile, blames the loss of power on a barrage of Ukrainian sorties on the Kakhovka dam using High Mobility Artillery Rocket Systems (HIMARS), a crucial U.S.-supplied weapon, although there has been no independent analysis confirming the Russian claim.

Kyiv is reluctant to comment on developments in a place it has long signaled it wants to reclaim. Two senior officials in Ukraine’s Ministry of Defense told Yahoo News that they could not address their plans for Kherson owing to operational security.

Reporting blackouts have been a common feature in the run up to Ukrainian counteroffensives, a way to maintain the element of strategic surprise. It is how Ukraine managed to launch an unannounced campaign in Kharkiv, in the northeast, which allowed it to recapture thousands of square miles of territory from unsuspected Russian troops — all while eyes were elsewhere focused, on Kherson.