As we started to descend, the air was warmer and more humid than in the cool Cathedral of St. Catherine above us. Father Ilia had yanked open the heavy trapdoors to the vault where Grigory Potemkin was buried in 1791. Prince, general, and lover of the Russian empress Catherine the Great, Potemkin had delivered Crimea for Russia’s empire, founded Kherson, and planned the colonization of what is today southern Ukraine. Now, in the beam of a flashlight, we could see the low dais on which his coffin had lain until Russian soldiers removed it two weeks ago. The official explanation was for “safekeeping.” Father Ilia just scoffed.

A fifteen-minute walk away, people were still celebrating in Kherson’s vast central square. Ukraine’s president, Volodymyr Zelensky, had just made an unannounced visit to participate in a solemn flag-raising ceremony. Four days before, on November 10, Russia had made its humiliating retreat from the city, which it had conquered in March and illegally annexed in September. Ukrainian forces returned the next day. They had forced the Russians out by strangling their hold on the city, destroying their supply lines across the mighty Dnipro River. In the distance we could hear artillery and what some said were the sounds of Ukrainian bomb disposal squads in action. The Russians were now ensconced in more defensible positions a few hundred meters away on the other side of the river, which flows out near here to the Black Sea and divides Ukraine in half.

“I just came to try to catch the Internet to call my son,” said Tatyana, an elegant fifty-eight-year-old sporting a Prada bag and a black faux fur jacket, who did not want me to use her surname. When the Russians retreated from Kherson, they said farewell by destroying its infrastructure. The city has no running water, heat, electricity, or normal telecommunications. On Monday a mobile phone mast had been set up in the square, and many people stood around trying to get a signal. Tatyana had worked in the municipal services department until April, when the Russians threw her and her colleagues out of the building. They had refused to collaborate, so the Russians brought in newcomers, including people from neighboring Crimea, which Russia annexed in 2014, to do their jobs. Now, she said, those people had certainly fled or been evacuated. Russian collaborators face arrest and trial.

When I asked her for directions to St. Catherine’s, she turned brusquely on her heels and told me to follow her. We walked across the park, passing the TV tower that the Russians had felled just before they left. Pinned to a tree was a notice dated July 25: someone was appealing for information about their father, who had been “again kidnapped,” this time on his way to work. We passed a bench with a small Ukrainian flag painted on it. Ukrainian resistance activists had been active in town, Tatyana told me, and could well have left their defiant mark here. More importantly, they had also been feeding intelligence to Ukrainian forces.

Father Ilia, a thirty-nine-year-old with a trim beard, was keen to talk. Like everyone else, he said that the eight months of the Russian occupation had been ones of pervasive fear. Although his branch of the Orthodox Church is still linked to Moscow, he evinced nothing but contempt for the Russians who had occupied Kherson. Simon Sebag Montefiore, the British historian and author of a biography of Potemkin admired by Vladimir Putin, has written that the Russian leader long ago became “fixated on Potemkin’s conquest of Crimea and Ukraine.” In the dank crypt, Father Ilia summed up the yawning gulf that has opened between Ukrainians and Russians. “They were coming here like bees to honey,” he said of the soldiers who had flocked to Potemkin’s marble memorial. “They were pretending to themselves that they were Potemkin and Catherine. We look at this as history, but they look at it as ideology.”

Back in the square Tatyana joined hundreds of people asking for the Internet password, holding up their phones, and waving them around trying to catch the signal. On the other side of the square, there were still Russian posters taped inside the windows of the locked municipal building. The crudest showed a mother in a traditional smock embroidered in blue clasping her daughter, who was wearing a smock embroidered in red with flowers in her hair. The poster, which said “To the future—with Russia,” sums up Putin’s delusion that Ukrainians—or Little Russians, as they were once called—should be happy to be back in the warm embrace of Mother Russia.

Down the street, among shops that had been closed since March, one small mall was open. There in the electricity-free gloom I met Iulia Baranova, forty-eight, who was selling cosmetics, perfumes, and soap. Russian soldiers had come to buy deodorant from her, she said, and “if you did not smile, they did not like it!” She told me when the Russians arrived they’d “expected us to be waiting for them like liberators…Oh my God, no way!” and turned her head and made as if to spit. When I asked her if anyone she knew had supported the occupation, she pointed to one of the flower kiosks just outside. The owner had come to grab her stuff “very fast” before fleeing. Russian soldiers had also been in the mall “running around like rats,” buying food and clothing on their way out of town.

Sitting on a wall nearby was Vlad Poloz, a college student who had been studying electromechanics before the occupation. Kadyrovtsy—Russian soldiers from Chechnya—had occupied the university, but the building they were using was hit by Ukrainian shells. Many people told me they spent most of their time at home out of fear of the Russian troops, but Poloz had boldly walked past the university. Soldiers arrested him and dragged him off for interrogation with a black bag over his head. They suspected him of informing Ukrainian forces about Russian positions. He was not beaten and was released quickly, but with every passing day stories emerge of torture and murder at the hands of the Russians. The highest-profile disappearance is of Ihor Kolykhaiev, Kherson’s mayor, who refused to collaborate and has not been seen since his arrest on June 28.

Thirty-two kilometers from Kherson, in the liberated village of Blahodatne, villagers said that two of their number had been arrested and disappeared. A man in his fifties, Volodymyr Saramov, told me that one Russian soldier, “drunk or high,” had stolen his potatoes, including the seed potatoes he had appealed to him to leave behind. The soldier fired his gun and smashed Saramov’s fingers. In 1932 and 1933, when Soviet teams were sent to seize every last grain of wheat and morsel of food from the peasants of Ukraine, the taking of the crop set aside for the next year’s planting contributed to the catastrophe. Nearly four million died in Ukraine during the Holodomor, the man-made famine that is widely believed to have been aimed at crushing any remnant of Ukrainian peasant resistance to Soviet rule. 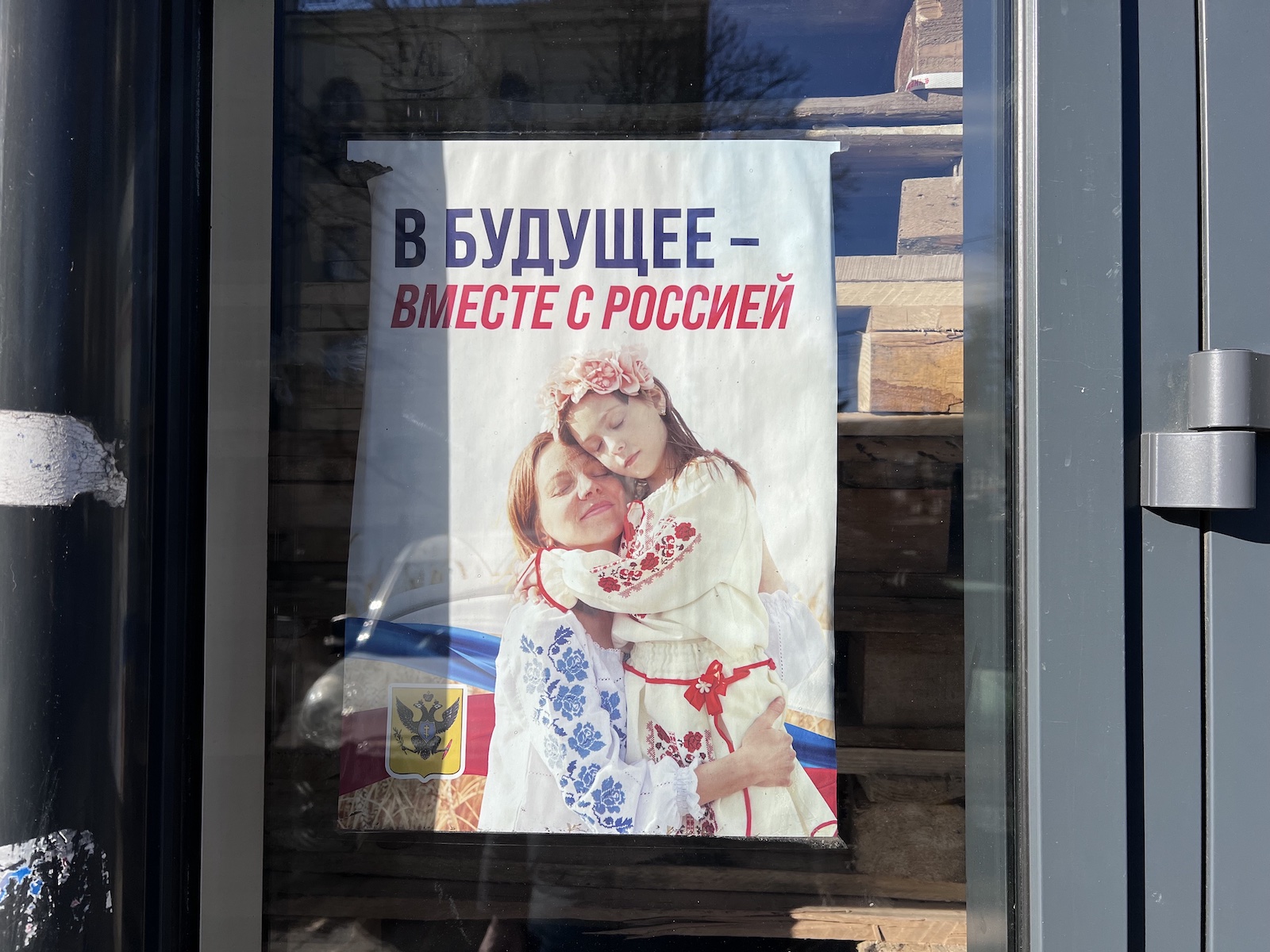 A Russian propaganda poster in a window of the municipal building in Kherson, Ukraine, November 14, 2022 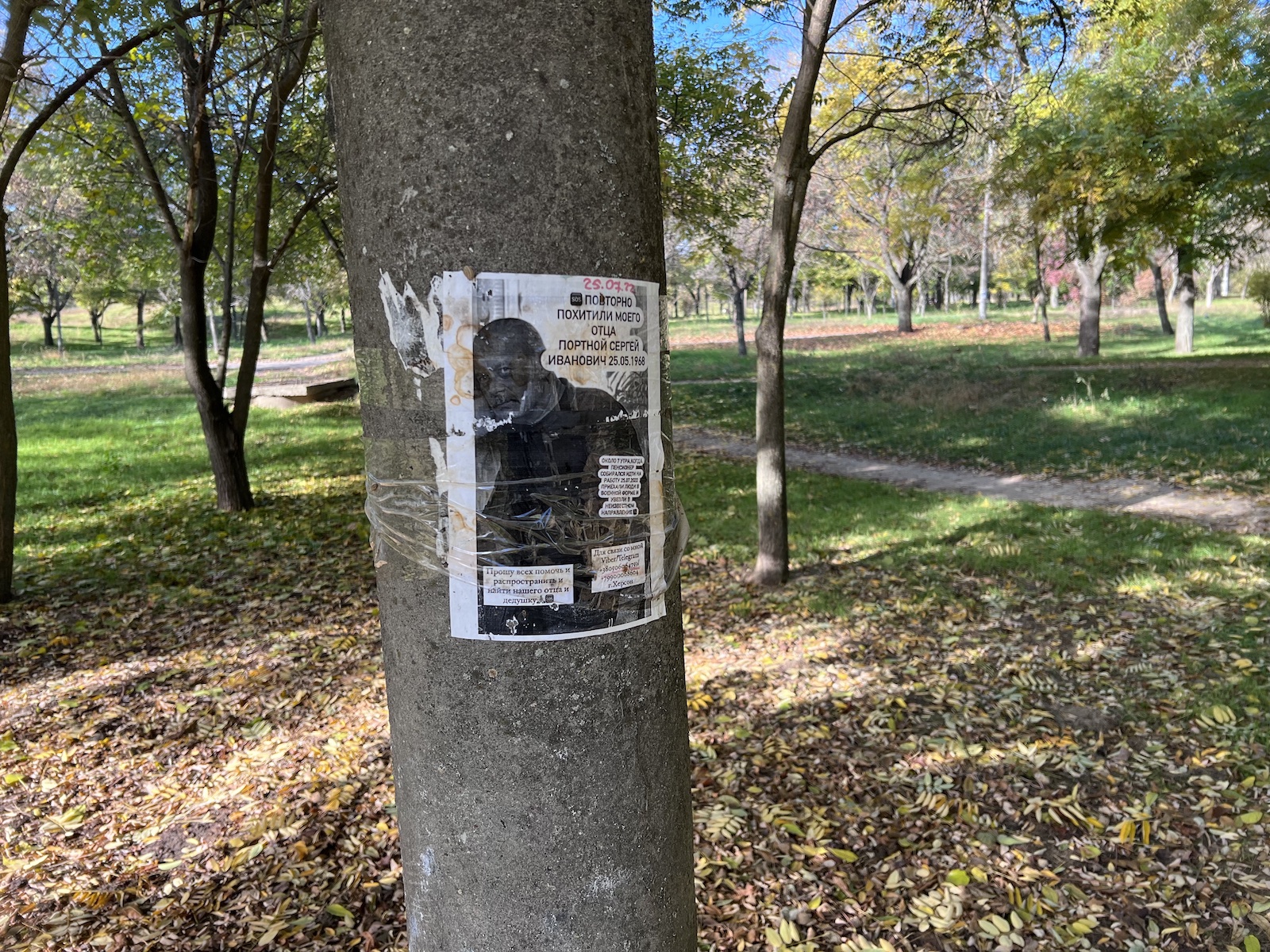 Over several days in September, the Russians held a referendum in the occupied regions asking people if they wanted to join Russia. Once it was done they announced that 87.5 percent of those who voted in Kherson had been in favor of annexation. It was, of course, a cynical farce. Collaborators accompanied by soldiers had come knocking on doors with a transparent ballot box. Everyone I asked told me they had pretended not to be home. Tatyana said that it was mostly old people who had voted, strangely associating Putin’s Russia with the Soviet Union of their youth. Her conclusion was that, just as young people cannot vote, old people should not be allowed to vote, either.

“They forced people to vote,” said a woman in a crowd of people in Blahodatne who had come to tell their story. Nadezhda Burlachenko, forty-five, said she had asked, “if I vote ‘no,’ will you kill me?” and had been assured she would not be executed. In any case no one took the results seriously. The final tallies were all made up, they said. Besides, hundreds of thousands had fled the occupation, and since they had gone to Ukrainian territory it was clear which side they were on.

A trench system just outside the village was heaped with garbage: empty plastic bottles, juice packs, plastic cutlery, tea bags, sleeping bags, and unopened jars of conserved red peppers. Russian troops had slept in the local school, dragging mattresses into the stairwell to protect themselves from any Ukrainian strikes. Before they fled they left messages on the blackboards: “Khokhols [a derogatory term for Ukrainians] faggots. You kill peaceful people, women, children and old people. We will meet you in hell and there you will not escape us!” 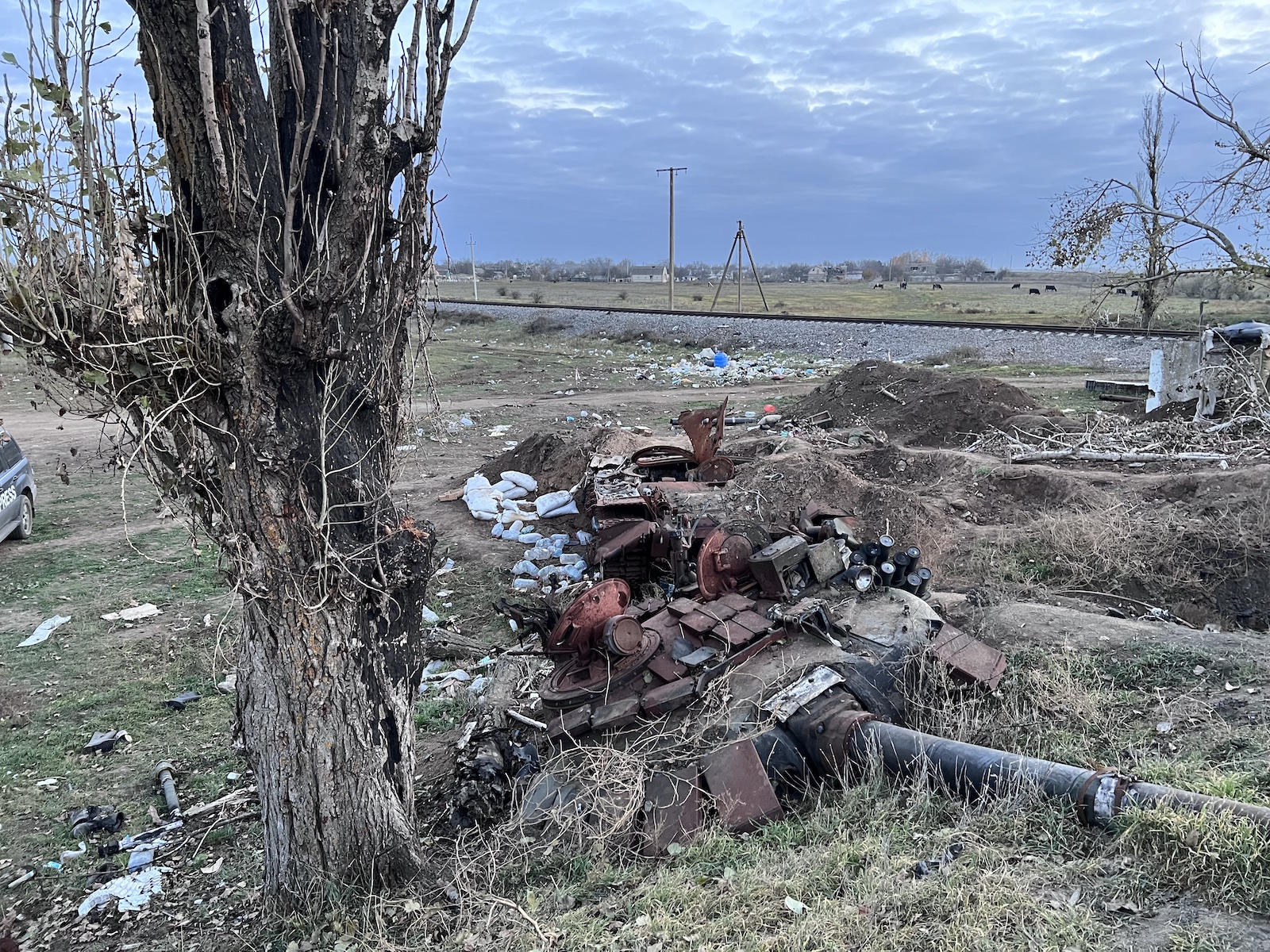 The remains of a destroyed Russian tank outside the village of Blahodatne, Ukraine, November 15, 2022 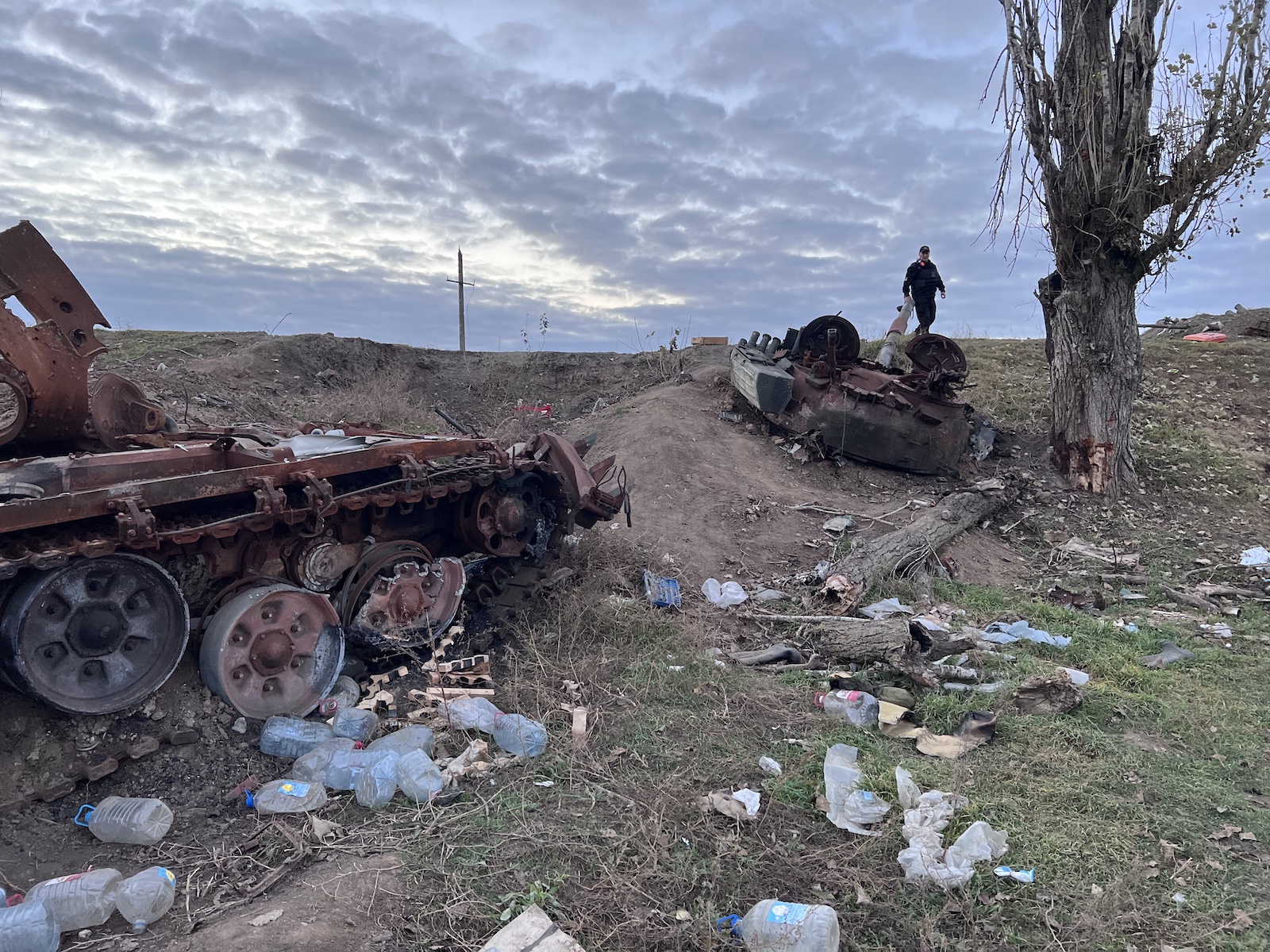 The remains of a destroyed Russian tank outside the village of Blahodatne, Ukraine, November 15, 2022

According to Major Serhiy Tsehotsky of Ukraine’s 59th Motorized Brigade, the Russians left behind some twenty of their dead by the Blahodatne trenches. “You should have seen the head we found in the tank,” he said. As was the case around Kyiv at the beginning of the Russian invasion, many of the soldiers here had been Buryat, a mostly Buddhist ethnic minority from eastern Russia. Tsehotsky pointed out a grave marked with a wooden cross. “The villagers know who it was,” he said, explaining that the grave would soon be exhumed by war crimes investigators fanning out across the newly liberated region. It seemed logical that the person buried there was one of the two men who had been hauled off by the Russians, in their search for anyone they believed had been informing Ukrainian troops of their positions and movements.

On November 15 on the road to Mykolaiv, sixty kilometers from Kherson, we stopped at a checkpoint. I was in the car reading Anne Applebaum’s history of the Holodomor. Suddenly there was a screech overhead like a low-flying jet. No, said everyone who had been standing about and had seen it, it was a cruise missile, one of more than ninety the Russians aimed that day at critical infrastructure. That night I returned to Odesa and the next morning awoke without power. Three days later, it has come on only fitfully for a few hours at a time.

With the Russian retreat from Kherson, a third chapter closed in the story of the war. The first ended with their retreats in March and April from around Kyiv, and the second in September, as they turned back on Kharkiv. But chapter four may be different, less a story of soldiers and front lines than a waiting game, as Russia tries to freeze Ukrainians into submission.

At Jela, a smart restaurant in Odesa, I spoke to a lawyer, Mykhaylo Gorbatov. Our discussion ranged over the last century or so of Ukrainian history: the revolution, the civil war, the Holodomor, and World War II, all of which together killed millions; then Soviet repression, the Chernobyl nuclear disaster, and the deprivations of the 1990s after the collapse of the Soviet Union. He concluded that if his parents, grandparents, and great-grandparents “had survived that deep shit, how can we not?”