‘I felt like I was at my grandma’s house’: Pitt’s Slovak Heritage Festival honors traditions for a new generation

‘I felt like I was at my grandma’s house’: Pitt’s Slovak Heritage Festival honors traditions for a new generation

Dancers perform during the Slovak Festival in the Cathedral of Learning on Sunday.

“The festival has really become a beacon and a major hub for the entire Slovak Community,” Zeibak said. “This is the epicenter. The Pittsburgh metropolitan area is the largest concentration of people with Slovak ancestry in North America.”

With two great-grandparents from Slovakia, Zeibak said he has always felt a connection to Slovak culture. Despite never attending Pitt, he felt drawn to the Slovak Studies Program and Slovak Heritage Festival. Now, he said his involvement in the program has helped him to educate others.

“The University of Pittsburgh’s Slovak Festival is the second largest in all of North America,” Zeibak said. “But we’re the only [festival] with a film series, with a lecture series, because there’s an educational aspect.” 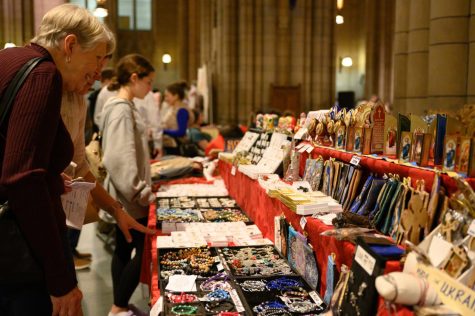 The lectures included discussions of major events in the 30 years since Czechoslovakia split into two independent countries, while films included explorations of political impacts on Czechoslovakian families in the 20th century. Thousands of people packed the Cathedral of Learning throughout the day to experience the educational and cultural aspects of the festival.

Pitt’s Slovak Studies program is the only program of its kind in the U.S. and Canada, offering language, culture and film courses. Martin Votruba established the program and served as its director for 28 years. Renata Kamenarova now holds the position.

Kamenarova said after she moved to the U.S. six years ago from Slovakia, she has helped the program grow and continues to emphasize the importance of learning. 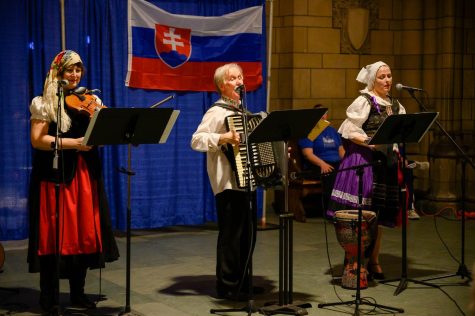 “This heritage is important because we promote visibility in Slovakia,” Kamenrova said. “We are helping to reconstruct that bridge between our countries.”

Visitors traveled from all over the U.S. to attend the festival. Radovan Javorčík, U.S Slovak ambassador, stayed in Pittsburgh for three days to lecture at the festival. Hybrid students in Kamenarova’s Slovak Studies classes came from St. Louis, Missouri and Eastern Pennsylvania to meet with their peers and participate in the festival. Attendees traveled from as far as California to experience Slovak culture.

Emily Molitoris, a recent Pitt graduate and festival attendee, visited Slovakia on scholarship last summer through the Slovak studies program. She said she hopes the program will grow through events like the Slovak Heritage Festival.

“A lot of people in Pittsburgh have Slovak heritage,” Molitoris said. “It’s important to get them to recognize it.”

Andrea Janak, a senior psychology major who attended the festival, is in her final year of the Slovak minor.

“One of the main reasons I came here was the Slovak Studies Program,” Janak said. “It’s cool to see your heritage represented.”

Jitka Benedikova, a Point Breeze resident, is the director of the Czech and Slovak School of Pittsburgh. Founded more than 70 years ago, the school teaches students of all ages about Slovak language and culture. She said she is thrilled that events like Pitt’s Slovak Heritage Festival deepened her children’s connection with their heritage.

“My husband is Italian, I’m from Czech, I speak the language with them,” Benedikova said. “You give them the possibility to know where they come from.”

While the festival is normally reserved for Slovak vendors, Zeibak and Kamenrova decided to open it to other cultures, specifically Ukraine, due to the turmoil overseas.

Lesya Jurgovsky, a native of Ukraine, now resides in Forest Hill. By selling handmade Ukrainian embroidered shirts, jewelry, accessories and scarves at the festival, she said she hoped to aid Ukrainian families amid the war.

“Every penny will go towards supporting families in Ukraine,” Jurgovsky said. “Kids who are orphans, families who have lost housing, families that are moving from Eastern to Western Ukraine because they cannot leave Ukraine.”

“I’ve seen so many people post ‘I feel like my grandparents are alive again,’ Kamenarova said. “They say, ‘It’s my culture and I want to honor them.”