Southern Ukraine in November is a grey mass of brown, barren-looking farmland. The bright greens and yellows of the fields have faded and the snow has not yet fallen. But the upbeat mood in the small town of Snihurivka was in stark contrast to the season.

Around the town’s bombed-out buildings, the mountains of rubbish left by Russian soldiers and streets littered with shrapnel marks, groups of smiling, happy residents gathered together to chat. When cars drove past, they waved and smiled. They described feelings of ecstasy upon seeing Ukrainian troops and debated the most apt insults for the Russian soldiers, should it be “pigs” or “beasts”, they asked each other.

The town of Snihurivka sat firmly on the frontline, just a kilometre away from Ukrainian positions, and was retaken by Ukrainian forces on Thursday. Russia’s ministry of defence announced a tactical withdrawal of its forces in the south after Ukraine repeatedly destroyed their supply lines and ammunition depots.

The outbursts of joy being captured across the newly retaken swathe of southern territory derives from the hope instilled in residents by the long talked-about southern offensive, first announced by Ukraine’s president, Volodymyr Zelenskiy, in late June and then again in late August. Ukraine’s forces made their first decisive strides in early October.

Unlike Ukraine’s northern regions, including areas close to Kyiv, which were freed while the country was overwhelmed by the scale of the invasion, or Kharkiv region, which was retaken while the world was looking away, the liberation of Kherson region was so hyped by Ukraine’s authorities that it became a fixation for many Ukrainians, especially for those who lived there. 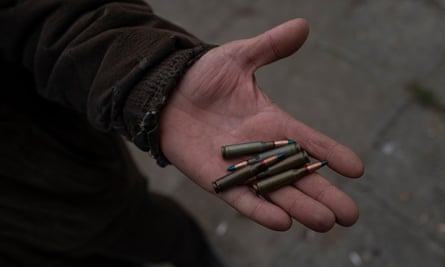 A resident picks up some of the bullets that scatter the ground near a former Russian military position.

“I have a radio – a battery-powered one,” said Sasha, a slight man in his 60s, carefully stepping over a pile of sand in case the Russians had left mines below. “I knew [the Ukrainian army] was coming. We were just waiting.”

“I can’t tell you how it felt seeing [Ukrainian troops]. We sat for eight months without electricity, without water,” said Olga Ivanovna, Sasha’s neighbour and friend. “We slept in our basements, fully clothed. Three months! Three months, we waited!”

Residents said they tried to keep up with the news by any means possible after their electricity was cut off and Russian soldiers went door to door confiscating phones. Some had generators and were able to catch Ukrainian TV, a few managed to keep their phones and would climb to the top of abandoned five-storey blocks of flats to catch some signal.

Standing outside her house, talking to friends, 65-year-old Vera Borisovna pointed to her empty flowerbed and beamed, saying “There’s nothing left, we took all of them to give to our guys,” her voice quaking as she talked about the moment Ukrainian soldiers entered the town. 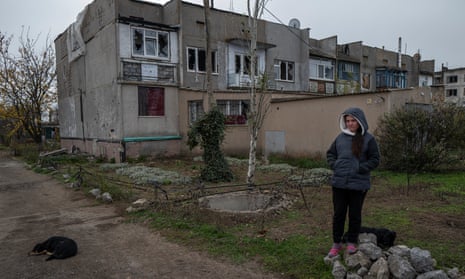 A girl in front of her battered apartment, where she lives with her mother and sister.

“I can’t stop smiling because it’s been eight months of nothing to smile about,” said Borisovna, whose house was between Russian positions and who once had to duck behind her fence to avoid the shrapnel that pock-marked her street. She said she kept a diary because that was the only way she could keep track of what date it was without electricity.

Hardly any of Snihurivka’s residents left when the invasion started, or after they came under occupation, they said. They were either too old or did not have enough money, or both. They described themselves as hostages, dodging the stray incoming fire while trying to find supplies and avoid the Russian soldiers.

The hardship fostered a sense of community and solidarity that residents said bonded them together. The head of the town’s market, for instance, Oleksandr Shevachuk, travelled with his wife, Valentyna, to Kherson at their own risk to buy food for the only shop in the town, which they set up in their garage. 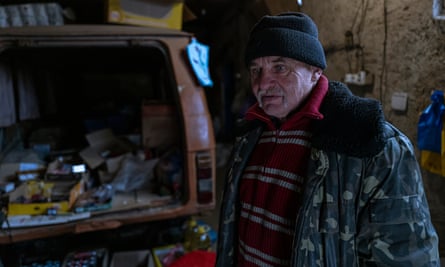 Oleksandr Shekavcuk in the town’s only shop, run by him and his wife Valentyna in their garage.

But just as in other towns and villages across Ukraine, there were people, the majority men, who, although happy the Ukrainians had returned, would probably carry the scars of the occupation for the rest of their lives.

Volodymyr Perepilnitsia, 58, was detained by the Russians three times, beaten, tortured and routinely intimidated. As a former Ukrainian army captain and police officer, his name was on a Russian list of potential pro-Ukrainian troublemakers. 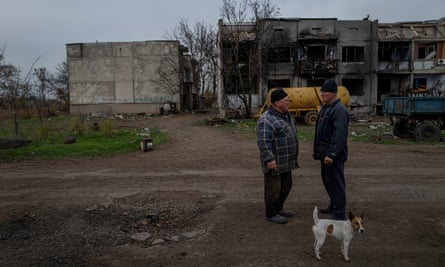 Volodymyr Perepilitsia talks with a neighbour in his street.

The first time the Russians took him away for interrogation, they accused him of being a “knocker”, slang for a spy. The second time he was taken because he refused to accept their humanitarian aid, after which, he said, they looted his house as punishment.

The third time he was detained it was because a young 20-year-old Ukrainian soldier, whom he had witnessed being beaten heavily by Russian troops the day before, had disappeared. Perepilnitsia said the soldier had escaped with his wife on a moped at night.

“They kept me in isolation for five nights in a row and beat me,” said Perepilnitsia, who said the Russians used the local police station as their interrogation centre. “They beat one young man to death. I know because I heard it. I was in the neighbouring cell and I heard them beat him and then I heard them drag him out.”

Perepilnitsia said he did not know where the dead man had been buried but he said there were “many” men who had gone missing since the Russians took control in March.

Before the Russians left Snihurivka, which locals said happened over a matter of hours, they planted what is likely to be a future misery for the town’s residents.

“All the fields are mined,” said Perepilnitsia, pointing to the land surrounding the town. “A farmer boy went out yesterday to look at the new cemetery and blew himself up. No one’s gone to take his body yet. He survived here and died there. What can I say?” 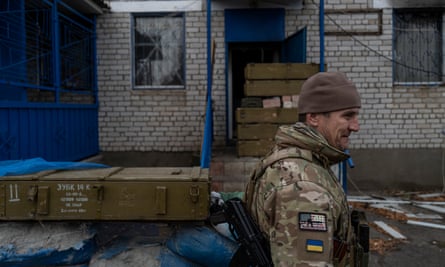 A Ukrainian soldier checking the site of a former Russian military base for mines and booby traps.

The head of Ukraine’s national security council, Oleksiy Danilov, told Ukrainian TV that the Russians mined “huge swathes” of the area before their retreat, as well as leaving explosives.

“Anyway, you see what they’ve done here – pigs,” said Perepilnitsia, pointing to the charred buildings and the sea of rubbish surrounding them.

Accompanying Perepilnitsia was his Jack Russell puppy, who was peeing on car tires. “Patron!” he exclaimed. Patron is the name of the Jack Russell that Kyiv rescuers trained to find mines in the early days of the war, now famous countrywide. It seems that despite their isolation and suffering, the residents of Snihorivka were following the war along with rest of Ukraine.