BUDAPEST, Hungary (AP) — Hungarian Prime Minister Viktor Orban made veiled comparisons on Sunday between the Soviet troops that attacked Hungary during the 1956 revolution and the institutions of the European Union today.

Marking the 66th anniversary of that crushed uprising, Orban suggested that the EU, which has sought to rein in democratic backsliding in Hungary, would end up like the Soviet Union, which dissolved more than three decades ago.

“Let’s not bother with those who shoot at Hungary from the shadows or from the heights of Brussels. They will end up where their predecessors did,” Orban said in a speech to a select group of guests in the rural city of Zalaegerszeg in western Hungary, breaking with a tradition of giving a speech in Budapest on the anniversary.

His absence from the capital on one of Hungary’s most important national holidays comes as his government faces growing pressure from a sustained wave of protests by Hungarian teachers and students.

The educators demand higher wages and better working conditions. Another protest was planned on Sunday in Budapest.

Get The Times of Israel's Daily Edition

Orban, who characterizes his form of government as an “illiberal democracy,” is also facing the threat of cuts to EU funding over his democratic record and perceived corruption. 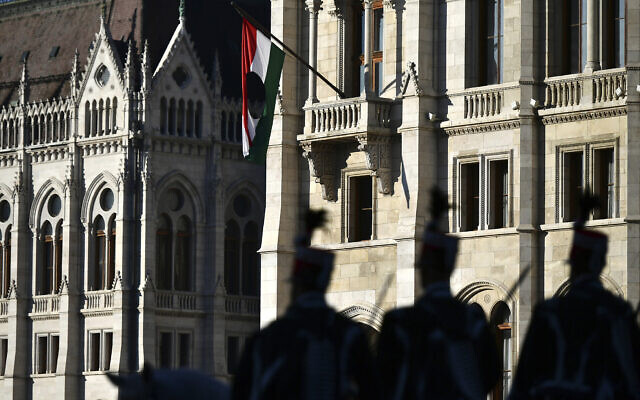 Seeking to salvage some funding, the Hungarian parliament recently passed new anti-graft legislation. But the country still risks losing billions of euros in funding as punishment over perceived breach of democratic practices — something that has caused the currency and economy to weaken recently.

“We were here when the first conquering empire attacked us, and we’ll be here when the last one collapses,” Orban declared on Sunday. “We will bear it when we must, and we will push back when we can. We draw swords when there is a chance, and we resist when long years of oppression come.”

“We are victorious even when we are defeated,” Orban said.

The October 23 national holiday commemorates the beginning of a 1956 popular uprising against Soviet repression that began in Budapest and spread across the country.

After Hungary’s Stalinist leader was successfully ousted and Soviet troops were forced out of the capital, a directive from Moscow sent the Red Army back into Budapest and brutally suppressed the revolution, killing as many as 3,000 civilians and destroying much of the city. 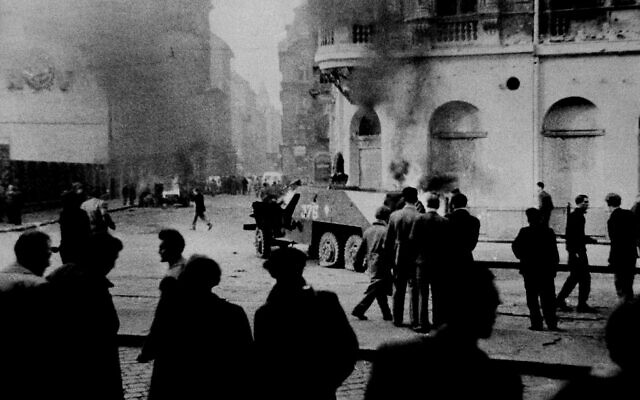 The holiday, which looms large in Hungary’s historical memory as a freedom fight against Russian repression, comes as war rages in neighboring Ukraine where Moscow has occupied large swaths of the country and illegally annexed four regions.

Orban, widely considered Russian President Vladimir Putin’s closest ally in the EU, has vigorously lobbied against the bloc imposing sanctions on Moscow, though the nationalist leader has ultimately voted for all sanctions packages.

Alone among its neighbors in Central and Eastern Europe, Hungary has refused to supply Ukraine with weapons or to allow their transfer across its borders. However, Orban has declared that Moscow’s invasion is “clear aggression,” and that his government supports Ukraine’s right to territorial integrity.