A media specialist has said Ukrainians are using humour as a “vital instrument” in the online war against Russian propaganda and disinformation on social media.

Valeria Kovtun, 25, who is the head of Filter, a Ukrainian government-backed project launched in 2021 to promote media literacy, said there has been a shift in the online content being produced since Russian troops first invaded in February.

Ms Kovtun said there has been an increase in Ukrainian civilians and soldiers turning to social media to share videos and memes relating to the ongoing conflict in a more positive light through dance routines, survival tips and satirical responses to political situations.

Ms Kovtun told the PA news agency: “I think humour has become an instrument in this information war, something which we didn’t see in the first few months. 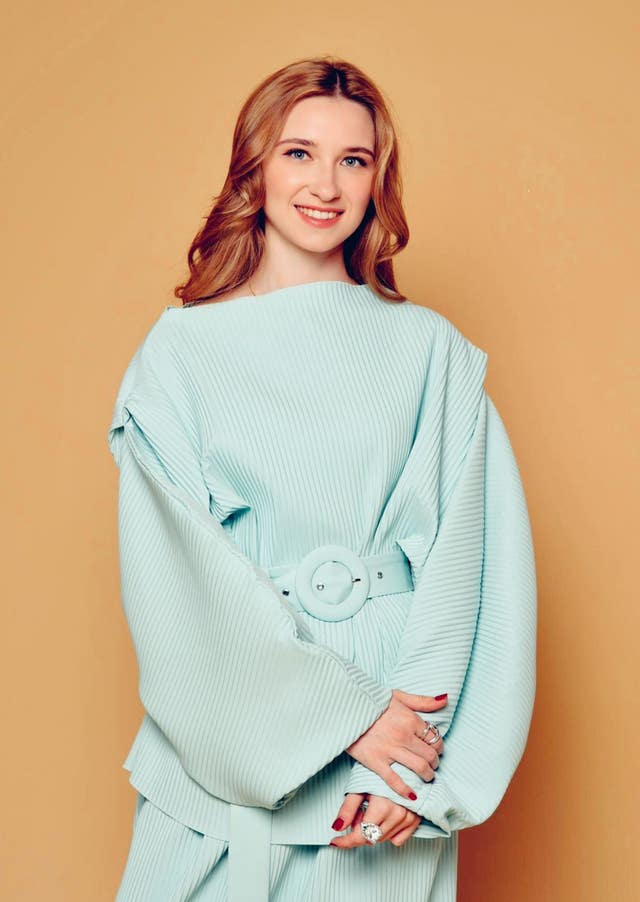 “Ukrainians are very good at creating memes and getting them viral because they know how to appeal to emotions.

“I think humour helps to keep up the spirit and of course, getting viral on social media means a message of defiance can get spread very quickly.”

Satirical accounts across social networking platforms including Twitter, Instagram, Facebook and Tiktok are increasingly growing in popularity with Ukrainian social media users and their Western allies.

One example of this is the Ukrainian Memes Forces, @uamemesforces on Twitter, which has more than 330,000 followers and regularly posts satirical responses and memes relating to news coming out of Ukraine. 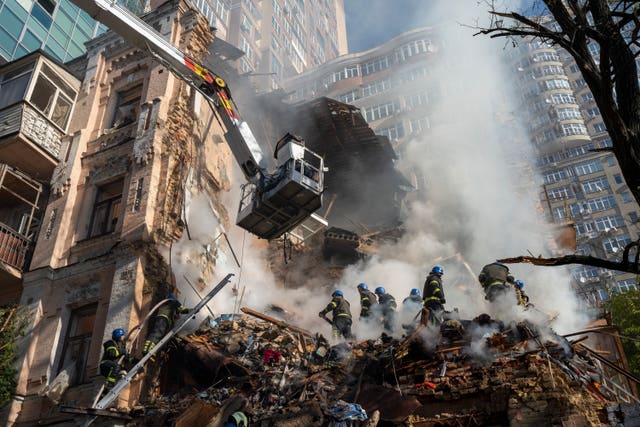 Firefighters at work after a drone attack on buildings in Kyiv, Ukraine (AP Photo/Roman Hrytsyna)

Posts from the account use various viral imagery such as references to the US cartoon the Simpsons combined with text mocking the Russian president, Vladimir Putin, and his military.

A statement on the group’s patreon says: “The great thing about memes is that they can explain complex issues and can break the ice between strangers around the world.

“Our goal is to convey the truth about what is happening now in Ukraine with the help of memes.”

Ms Kovtun, who is a Ukrainian national currently living in London, studied at the London School of Economics but had been living in the Ukrainian capital Kyiv before war broke out in February.

Last month, she travelled back to Kyiv and witnessed Russian airstrikes on the capital, during which she observed a “clear shift” in the reaction to the bombings from civilians in the city.

“In the first few months, Ukrainians were mostly scared, they were lost and they didn’t know how to react,” Ms Kovtun said.

“I myself saw this in October when I was in Kyiv that Ukrainians seemed way calmer and when there were rocket attacks they knew what to do and where to go.

“Instead of being a country that needs saving, they are positioning themselves as a country that knows they will win but needs a little bit of support from the world to be able to do it.” 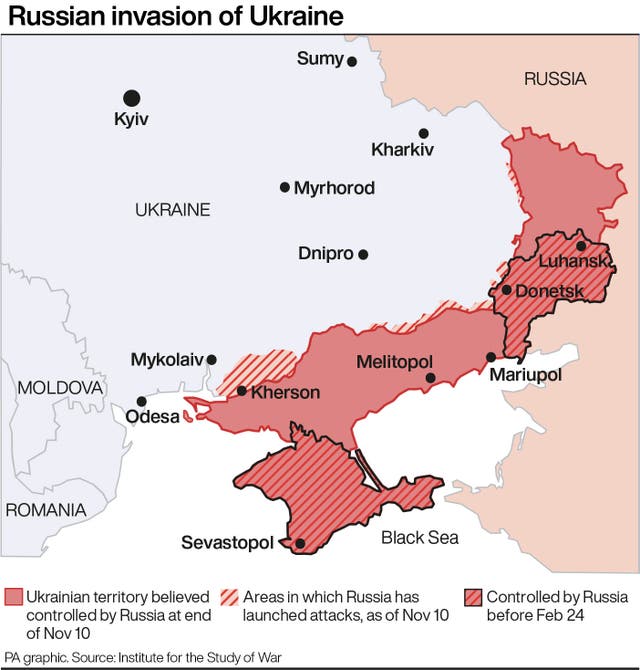 It comes as Ukrainian troops prepare to reclaim the city of Kherson, in southern Ukraine, which is the only provincial capital Russia had captured during its nearly nine-month invasion.

On Friday, videos and photos began circulating on social media which appeared to show villagers hugging the Ukrainian troops and a Ukrainian flag flying over a monument in a central Kherson square for the first time since the city was seized by the Russians.

Part of Ms Kovtun’s fight against disinformation includes verifying the mass of photographs and videos being uploaded and shared online daily, as many have been proved to have been manipulated or to be spreading incorrect information.

She said it important for Ukrainians to learn the tactics and have the instruments for fact-checking online.

Ms Kovtun said: “When you are in the war zone, your security and your safety is related to your ability to filter information.

“If you are not media literate you can jeopardise yourself or your family, especially in this active phase of the war.

“For example, at one stage they were trying to sow disbelief in the Ukrainian political leadership by creating deep fakes of President Volodymyr Zelensky calling on people to lay down their arms.”

This week, Twitter’s new owner Elon Musk faced criticism for introducing – a now reversed – option for users to pay a subscription fee of £6.99 a month for a blue verification badge, that was once only available to high-profile users.

Experts warned that the move could contribute to the spread of misinformation and fraud after a surge of fake accounts began using the blue checkmark to pose as powerful figures including world leaders, government departments and even Mr Musk.

Ms Kovtun said that social networking websites cannot always be expected to enforce regulation and the responsibility should fall on the individual to educate themselves in media literacy to avoid being caught out by the spread of emotionally weaponised fake news.

“When talking about freedom of speech and disinformation, the one thing we should always bear in mind is that misinformation always weaponises emotions,” Ms Kovtun said.

“Emotions make posts or tweets more viral and this means the algorithm will pick them up quickly, because by default people are reacting to emotional tweets more than they would react to a balanced piece of news.

“By developing our media literacy and our understanding of disinformation tactics, we are able to approach it in a more rational way.”