How Western Leaders Can Keep Up Public Support for Ukraine

How Western Leaders Can Keep Up Public Support for Ukraine

This has been an unseasonably warm autumn. In parts of North America and across Europe, temperatures have yet to drop to their traditional pre-winter lows, sparing people from having to turn on their heating at a time when soaring energy bills and high inflation are squeezing millions of families.

The milder weather is little comfort for Ukraine, which despite recent battleground victories—including the liberation of the city of Kherson from Russian forces—faces a difficult winter of power outages and water shortages. But for its allies in the West, it is helping stave off what some policymakers and analysts fear could be looming “war fatigue,” in which public support for Ukraine buckles under the burden of rising food and energy costs at home.

The Biden administration reportedly warned Ukrainian President Volodymyr Zelensky in private about the potential for such fatigue, according to The Washington Post. Lawmakers in the U.S. and Europe’s largest economies tell TIME that although support for Ukraine remains remarkably stable in their respective countries so far, the prospect of that changing amid a difficult economic winter is not something that can be ignored.

“Western public opinions are a front of the war for [Russian President Vladimir] Putin,” says Benjamin Haddad, a French lawmaker and the spokesperson for Emmanuel Macron’s ruling Renaissance Party in the National Assembly. “He is playing on energy as a weapon to increase energy prices, he is supporting populist movements—all because he understands that transatlantic support for Ukraine has been a key element of the successful Ukrainian resistance.”

If global polling is any indication, those efforts have so far been faltering. Nearly nine months into the war, transatlantic solidarity with Ukraine and its fight against Russian aggression appears to be durable across a number of metrics. Nearly two-thirds of Americans continue to closely follow the developments in Ukraine, according to an October Ipsos poll, and more than half believe that the U.S. should continue to send financial and military aid to Ukraine—a commitment that has surpassed $54 billion to date. Support for Ukraine across Europe is similarly strong, with 60% of E.U. populations supporting the continued delivery of weapons to Ukraine, according to an October survey by the German pollster Bertelsmann Stiftung. Public backing for Ukraine was even stronger among the bloc’s largest economies, with Germany and France standing at 61% and 63%, respectively.

“The German public in its vast majority is very clear-eyed on the reason for the economic and energy problems, which is the war,” says Norbert Röttgen, a center-right Christian Democratic lawmaker and former chair of the Foreign Affairs Committee in the Bundestag, Germany’s parliament. “There has remained until now a remarkably high degree of solidarity, empathy, and rationality.”

What has changed, however, is the economic circumstances surrounding that support. Though Western countries have not been as disproportionately impacted by the war in the way that many poorer nations have across the Middle East and Africa, many of which are highly reliant on Ukraine and Russia for their wheat and grain exports, they too have started to feel the economic pinch.

Energy prices have been a source of particular anxiety among Ukraine’s Western allies. In the U.S., support for sanctions on Russian energy even if it results in rising prices at home has declined from its post-invasion high of 56% to 44%, according to a forthcoming report by the global pollster Morning Consult, with support trending higher among Democrats and Independents (52% and 45%, respectively) than Republicans (35%). The same report, which TIME has reviewed, found that Europeans are especially sensitive to price increases, with just 28% of respondents in France and Germany and 35% in Britain supporting energy sanctions even if it means rising costs. It’s a discrepancy that the report’s author Sonnet Frisbee, Morning Consult’s lead geopolitical risk analyst for Europe, the Middle East, and Africa, says can be explained by the fact that “energy inflation in Europe is way higher” than it is across the Atlantic.

These sensitives have manifested themselves in different ways. In Britain, which is reeling from its worst cost-of-living crisis in a generation, support for Ukraine is a largely nonpartisan issue. “This, for now, seems to be one area that we can all agree on,” says Stewart McDonald, a Scottish Nationalist Party lawmaker in the otherwise deeply-divided British parliament and a member of its Foreign Affairs Select Committee. But political consensus doesn’t mean that “we can just rest on our laurels,” he added, noting the potential for the energy crisis—the worst effects of which have been masked by the British government’s energy assistance package—to erode public support. “We still have to be conscious of the public debate around this.” 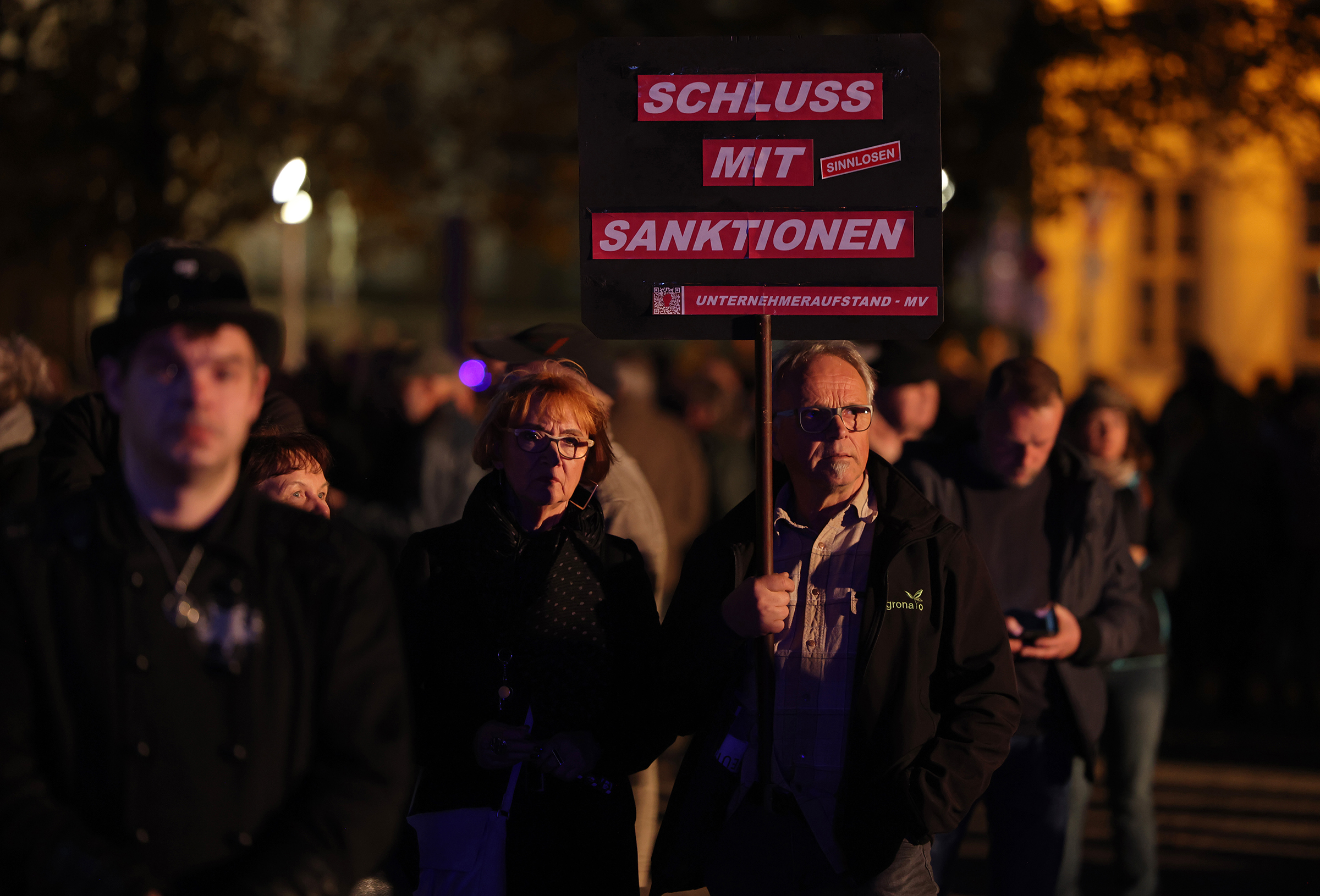 A man holds a sign that reads: "Enough with sanctions" prior to a Monday-night "stroll" ("Spaziergang") of protesters on Oct. 24 in Schwerin, Germany.

Read More: How Ukraine’s Air Defenses Just Got a Boost

In France and Germany, the political situation is comparatively more fraught. While mainstream parties in both countries are largely in favor of continued military, financial, and humanitarian support for Ukraine, that consensus does not extend to those on the far-right and far-left of the political spectrum, which could seek to exploit the rising cost of living for their own political gain. This is already the case in France, where far-right leader Marine Le Pen has argued for lifting sanctions on Russia on the grounds that they are inflicting more harm on the French than they are on Russians. Recent protests and strikes across the country demanding higher wages to cope with rising costs suggests that the French public’s tolerance for economic pain and sacrifice may have already been met.

“No one wants to be a spokesperson for Putin, but the same people who used to be the pro-Russian voices in France are now making the case differently,” says Haddad, noting their calls to lift sanctions and cease supporting the Ukrainian war effort in favor of peace “are fancy ways of actually supporting the Russian narrative without doing it directly.”

In Germany, where similar protests have taken place, “the most sensitive issue is the energy price hikes,” says Nils Schmid, a German lawmaker and foreign affairs spokesperson for the ruling center-left Social Democrats. While support for Ukraine remains high among the country’s major political parties—albeit with some disagreements over how far that support should go—the prevailing concern is that a vocal minority of anti-Ukraine voices, bolstered by the country’s far-right and far-left factions, could grow louder. As Schmid sees it, two societal cleavages that could be exploited is that between Germany’s East and West (the former of which is historically closer to Russia and a far-right stronghold) and between Germany’s younger and older generations (the latter of which may be more likely to be sympathetic to calls for dialogue and diplomacy with Moscow). Indeed, the far-right Alternative for Germany, whose lawmakers have not hid their affinity for Russia, has seen its position in the polls steadily rise amid growing anger over inflation and the cost-of-living crisis.

But the country that observers anticipate to be most prone to war fatigue is the same one that has provided the most support to Ukraine so far: the U.S. This perception was largely driven by the midterm campaign, during which Republican Party lawmakers such as prospective House Majority leader Kevin McCarthy and Donald Trump acolyte Marjorie Taylor Greene suggested that they would prioritize domestic needs first, with the latter pledging that, under the GOP, “not another penny will go to Ukraine.”

The Republicans did not perform as well as expected in the midterms. But regardless of whether the party gains control of the House of Representatives and by how many seats, Ukraine already appears poised to become a more partisan issue in Washington. Democrats are more than twice as likely to say that the U.S. government has a responsibility to protect Ukraine than Republicans, according to Morning Consult. Around one-third of Republicans say that the government is doing “too much” to stop the invasion.

“There is a growing anti-Ukraine tempest in the Republican Party and it’s possible that will mean trouble for Ukraine aid packages in the House,” says U.S. Senator Chris Murphy, a member of the Foreign Relations Committee. “So long as Trump’s surrogates are attacking Ukraine, there is going to be a big chunk of the American public that will be skeptical of additional aid packages.”

War fatigue doesn’t have to be a foregone conclusion, though. As many of those who spoke with TIME see it, there are tangible steps that Western governments can take to fortify public support, starting with how they make the case for it. When it comes to addressing Republican fissures over aid to Ukraine, “it would be wrong to treat these questions as illegitimate,” says Matt Duss, a visiting scholar at the Carnegie Endowment for International Peace and a former chief foreign-policy adviser to Senator Bernie Sanders. “The Biden administration has and should continue to make the argument for why supporting Ukraine’s defense is in the American national interest. I think there’s a strong argument for that. The support for Ukraine will benefit from willingness to engage in these kinds of discussions and meet these arguments and not dismiss them.”

Continually making the case for supporting Ukraine is one thing that governments can do to stave off war fatigue; shielding their populations from the worst economic consequences of the war is another. When Europeans are asked about what most worries them, the rising cost of living repeatedly tops the list, says Isabell Hoffman, the founder of eupinions, a Berlin-based pollster, noting that this sentiment is largely fueled by uncertainty around how much the war will affect them, cost-wise. Britain’s assistance on energy bills is due to expire at the end of March, and there are questions about the size of energy price caps in France and Germany that are expected to go into effect in January.

Perhaps the easiest thing that governments can do is to remind their populations that their support for Ukraine is having its desired effect. “People can see it,” says Haddad of Ukraine’s recent victories. “Their success on the ground is making the case for people like myself and for the French government who have been saying, ‘What we’re doing is having an impact on the ground. It’s working.”

Write to Yasmeen Serhan at yasmeen.serhan@time.com.