Ferran Torres, Luis Enrique and a special relationship on and off the pitch

Ferran Torres, Luis Enrique and a special relationship on and off the pitch

The reason? Unequivocal support from his national coach Luis Enrique. It goes well beyond the obvious headlines about the depth of their relationship.

Spain’s squad at this World Cup is full of players who have had struggles recently at club level — Alvaro Morata at Atletico Madrid, Jordi Alba with Barcelona and Real Madrid’s Marco Asensio all perform much better and more consistently for their country.

Torres is another who has had his issues in club football during his international career, and the help he has been getting from Luis Enrique began long before he started dating his national coach’s daughter.

The importance of their connection means that Torres — despite being subbed off early in Sunday evening’s 1-1 draw with Germany — will have a big role to play as Spain look to go far in Qatar.

As he starred for Spain’s under-17 and under-19 teams, winning European Championships in 2017 and 2019, few observers doubted that Torres was going to play for their senior team sooner rather than later. Many also expected that his pace and directness on the wing would be a useful addition to a Spanish side full of lovely ball-players but lacking his characteristics up front.

Had the COVID-19 pandemic not delayed Euro 2020 by a year, Torres could have been a late bolter for the squad, given his displays for Valencia in La Liga and the Champions League during that 2019-20 season. As it happened, his senior debut came against Germany didn’t come until September 2020, a few weeks after he had joined Manchester City. 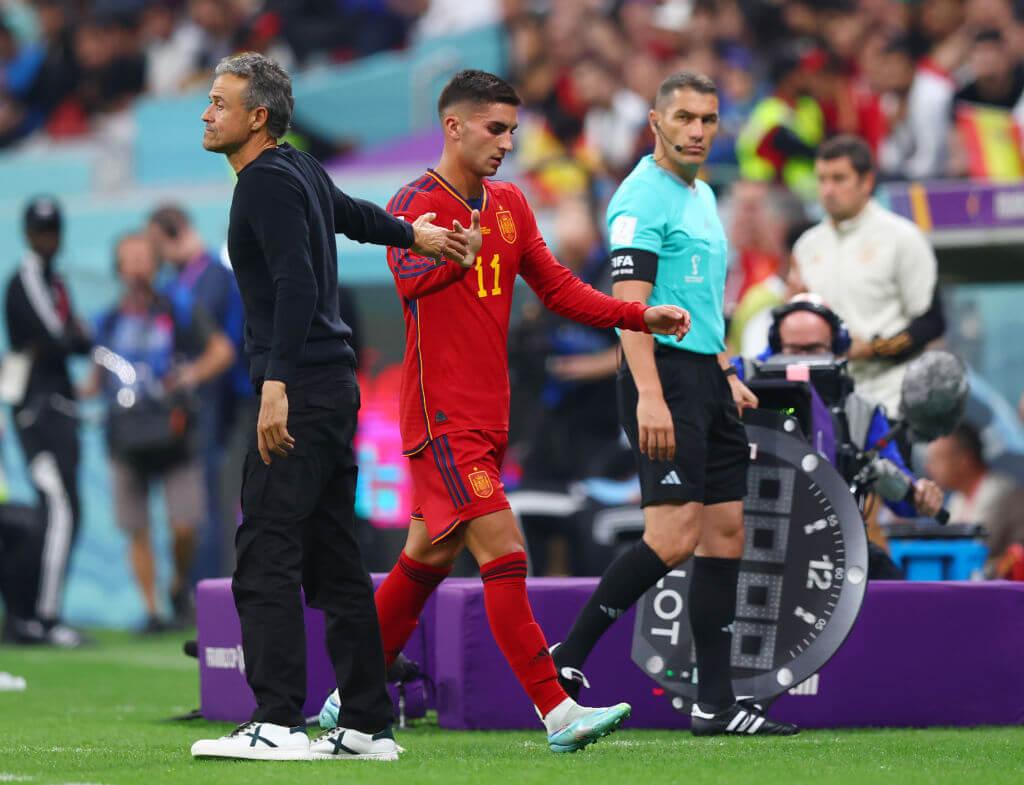 The Spain team for that Nations League game in Stuttgart now looks dated — the XI included Jesus Navas, Rodrigo, Thiago, Fabian Ruiz, Sergio Ramos and David de Gea. The 20-year-old debutant looked at home, lasting the whole game and instigating the move that saw Spain equalise in stoppage time. He then scored off the bench a few days later, the fourth in a 4-0 win over Ukraine in the same competition.

Despite being in and out of Pep Guardiola’s City team in his debut year in England, he kept his Spain starting place for the return game against Germany two months later in Seville. It helped that at the Etihad Stadium he was learning many of the same concepts that Luis Enrique employs for Spain, on and off the ball. At Valencia, Torres had been a direct right-winger; Guardiola’s insight was to make him roam around more and arrive unexpectedly in the penalty area.

This was shown as Torres scored a hat-trick in what turned out to be a 6-0 win over a sorry German side. His first goal was thrashing home a bouncing ball from 10 yards, the second was applying the final touch on a full pitch counter, the third was sweeping the ball home from 20 yards after another lightning break.

The complete team performance showed what Luis Enrique’s side could do when they all clicked and followed his ‘idea’ of suffocating teams with their pressing and fast passing. It all worked so well that both coach and player were disappointed afterwards, as Torres had missed at least three clear chances to score further goals.

Over the two years since, Luis Enrique has kept evolving his team, and regularly rotating his players, especially his front line. But Torres has remained a firm favourite. He played all six of Spain’s games at those delayed Euros last year, starting four of them and scoring twice, before they were eliminated on penalties by eventual winners Italy in the semi-finals.

Torres was then Spain’s top scorer in World Cup qualifying with four, and going into Qatar 2022 he had 13 goals in 31 international games.

Nobody had featured in more games for Spain during Luis Enrique’s time in charge. He was what the coach wanted — technical players who are physically and mentally quick, and who will follow his instructions to the letter.

Backing from his national coach has been important as Torres’ club situation has not developed as he would have wanted.

At City, he never got a settled starting place, so both parties were happy to accept when Barcelona offered €55million (£47.5m, $57.3m) to take him back to La Liga in January.

Torres arrived at Camp Nou still recovering from a broken bone in his foot. Once fit, he made a big difference, bringing attacking pace and zip to a struggling team, along with fellow winter-window arrivals Adama Traore and Pierre-Emerick Aubameyang. He scored and assisted in March’s 4-0 Clasico win over Real Madrid at the Bernabeu.

But there were signs of the pressure he was feeling when, after netting a penalty against Napoli in the Europa League’s first knockout round but missing several clear chances, he wept at the final whistle. He then scored away to Eintracht Frankfurt in the Europa League quarter-final first leg in early April, but that was his last goal of the season. After the embarrassing exit to the Germans in the return at Camp Nou, his form dropped away dramatically.

Then came Barcelona’s busy summer of financial lever-pulling to add more big-name forwards.There was another badly timed injury as he hurt a foot at the start of pre-season. Robert Lewandowski was the team’s new attacking leader, while Raphinha, another arrival, and the newly re-signed and revitalised Ousmane Dembele were Xavi’s first-choice wide attackers.

Torres has appeared in 18 of Barcelona’s 20 games this season, but has only completed 90 minutes twice. He has scored five goals but three of them came in two games against Czech outsiders Viktoria Plzen in the Champions League group stage.

This all provided new challenges for Torres, who has played more than 200 senior games already at age 22.

Fierce criticism from Barcelona fans and pundits has taken him by surprise, while everything that happens at Camp Nou has been magnified amid all the off-pitch noise. So he looked to take control of the situation himself, starting to see a psychologist.

“I’ve been through a more difficult moment, but I’ve put myself in professional hands and I feel very good,” Torres told Spanish news outlet Marca last week. “There is a lot of pressure and criticism in football, and you have to know how to manage it. We are not robots, so professionals can help you a lot.”

While Luis Enrique was not directly involved in suggesting that Torres seek out this help, psychologist Joaquin Valdes has been by the Asturian’s side in all of his coaching jobs. Valdes is always available at Spain squad get-togethers, and works with all the players one on one when they want. Morata is among those who found this support useful, especially when he was being whistled by Spain’s fans during the Euro 2020 group games.

Torres found the outside help useful to deal with personal issues, with his parents having separated when he was young.

His family setup is coming under the spotlight more now.

His relationship with Luis Enrique’s daughter Sira was an open secret before they started appearing on each other’s Instagram feeds early this year, but the national coach had not commented publicly on it until one of his nightly Twitch streams in Qatar. That came in typically blunt fashion — asked which player was his extension on the pitch, he thought for a while and then answered, ​​“Ferran Torres — because if not, my daughter will cut my head off.”

That has led to plenty of media coverage of the relationship.

The player did a press conference the day after Luis Enrique’s comments, and did not look quite so comfortable addressing the issue. “We both know it’s different when we are family and when we are coach and player,” Torres said. “We are handling it very well, naturally.”

Predicting Luis Enrique’s starting XIs is never easy, but there were few doubts that Torres would start their World Cup opener against Costa Rica last Wednesday. When Spain won a penalty he immediately grabbed the ball, when Dani Olmo and captain Sergio Busquets were willing to take it, and calmly scored. His second goal of the night was a mix of persistence and confidence — taking advantage of defensive confusion to turn and finish beyond Keylor Navas. 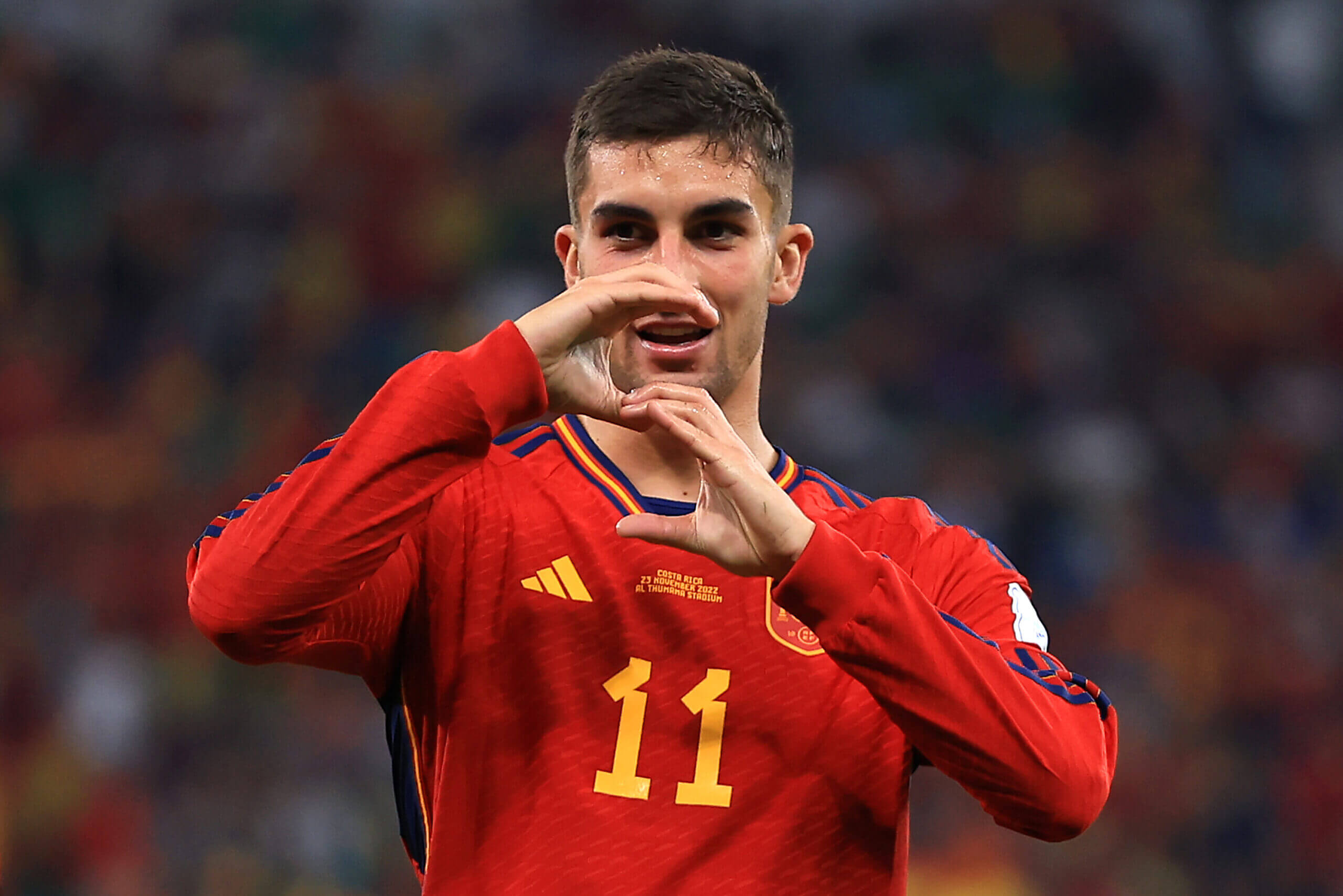 Torres scored twice in the 7-0 win over Costa Rica but was replaced after 54 minutes against Germany (Photo: Buda Mendes/Getty Images)

At 22, Villa had not made his senior international debut. That again shows the precocity of this Spain side, with Luis Enrique having shown such faith in a new generation of emerging stars, such as Pedri and Gavi.

Villa was Torres’ boyhood hero — a star with Valencia’s first team when he entered their youth system at six. Guardiola also played him on the left of a front three for Barcelona, a role he filled for Spain as they won the 2010 World Cup.

This Spain side play a style more similar to Guardiola’s City than Xavi’s Barcelona, where the wingers are told to stay wide and stretch the play. Luis Enrique wants Torres to get into the centre, as he kept doing against Germany in game two of their World Cup, although without as much success.

At times in the first half on Sunday, it was not actually that different to the 6-0 of two years ago, with Torres having several chances. Early on, Olmo twice set him clear inside the penalty area, but the first time left-back David Raum got back to put him off, and the second time he shot too high (and the flag had gone up anyway).

The best chance came when a corner fell to him at the back post — his first touch was excellent but Jamal Musiala’s block was even better.

Early in the second half, when ‘false nine’ Asensio raced down the left wing, Torres was arriving in the middle again but goalkeeper Manuel Neuer cut out the cross.

Nine minutes after the restart, he was replaced by Morata, who scored a fine goal on 62 minutes to put Spain ahead. There is a lot of competition for places in Spain’s front three, and more changes are likely for as long as they are in the competition.

But Torres is up for the challenge, and in a good place to handle whatever happens, with support all around him.