The European Commission on Wednesday (9 November) released details of an €18-billion-economic support package to get Ukraine through 2023, which it hopes will be approved by EU member states soon.

Under the plan, the EU would send Kyiv €1.5 billion per month in the form of 35-year loans, with interest payments covered by the bloc, to support Ukraine’s government in the face of the Russian invasion.

“We are presenting this new financial package for Ukraine at a time of acute needs for the country, as Russia’s relentless attacks continue to batter key infrastructure,” Commission Vice-President Valdis Dombrovskis told reporters in Brussels.

“Our financial assistance must be stable, structured and predictable,” he added.

The loan package will still have to be approved by EU member states, some of which have been sceptical about taking on responsibility for Ukraine’s increasing debt.

Dombrovskis urged EU countries and the European Parliament to approve the plan before the year’s end to make the first payments as of January next year.

“It needs to be decided quickly, 2023 is approaching fast, and Ukraine’s financing needs are urgent,” he said.

EU leaders are scheduled to meet for their regular summit on 15-16 December to take stock of this year’s measures and discuss the bloc’s further support to Ukraine.

However, consensus could be difficult to achieve as Hungary’s foreign minister, Peter Szijjarto, said earlier this week that although Budapest intends to continue providing financial support on a bilateral basis, it opposes allowing the EU to take out credit to help Ukraine.

Dombrovskis said he would work with Hungary to overcome the objections raised.

Ukraine’s Prime Minister Denys Shmyhal called the proposal “a very important initiative that will support the economic stability of our state and strengthen the foundation of our future victory”.

“These funds will help to cover a significant portion of the budget deficit, totalling $38 billion,” he added.

The bloc has already sent Ukraine €4.2 billion in macro-financial assistance this year and plans to pay another €2.5 billion by the end of this month.

In May, the EU Commission announced macro-financial assistance for Ukraine of up to €9 billion, but EU member state governments have not yet been able to agree on financing the entire sum yet.

Due to the slow provision of macrofinancial aid, the Ukrainian government had to resort to monetary financing, thus printing its own money to finance the war effort. If this strategy is used too much, it can lead to run-away inflation, making it more difficult for the government to finance the war.

However, the International Monetary Fund (IMF) estimates that Kyiv will need between €3-4 billion per month next year as it struggles to maintain government services while fighting off a Russian invasion that has occupied almost a fifth of its territory.

Brussels hopes that Washington and other major international donors will match its contribution to bring the support to the required level.

“We will ensure Ukraine emerges from this war as a prosperous country on the path to European integration. We will stand by Ukraine for as long as it takes,” European Commission president Ursula von der Leyen said. 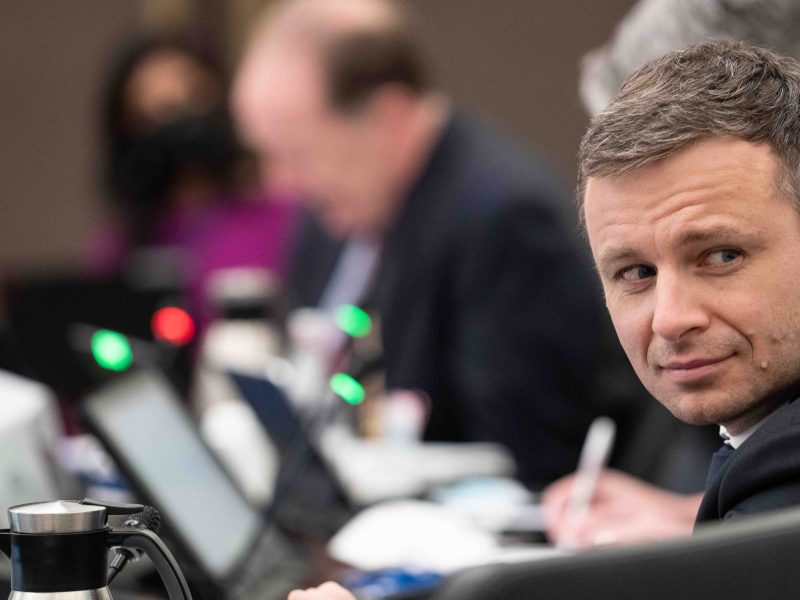 Ukrainian Finance Minister Serhiy Marchenko warned on Tuesday (25 October) of macroeconomic problems of monetary financing as the Ukrainian government has resorted to printing money to finance its defence and other state expenditure.