Eight Months into the Russian War on Ukraine, Civilians are Suffering

Eight Months into the Russian War on Ukraine, Civilians are Suffering

October 24 marks eight months since Vladamir Putin, the leader of Russia, the biggest country in the world, launched an unprovoked war on its democratic neighbor Ukraine. The toll taken by this war has been felt all around the world, in energy impacts and inflation, and a sense of unease, right down to the most local level.

While few of us are happy about higher fuel prices (Russia is one of the world’s largest exporters of oil), or the price of bread, flower or sunflower oil (major Ukrainian exports) we can at least be glad that no one is bombing our civilian infrastructure. Sending guided missiles to hit your neighbor’s hospitals and cultural centers and energy transmission plants, drones to attack playgrounds and preschools, or kidnapping our civilians is not friendly.

But such is the reality in Ukraine. While civilians are a major target, nearly a quarter of Ukrainian energy infrastructure has been destroyed, and Russia is threatening a major hydroelectric dam.

As winter closes in and their military advances have stalled and been reversed, the Russian assault on innocent civilian targets is yet another example of an autocratic ruler’s obsession with what he views as an inevitable empire — a reassembly of the Soviet Union. 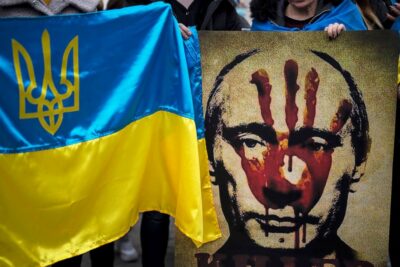 Cruelty, chaos, and terror — cold, darkness, and starvation — are the point. Families, children, apartment buildings and homes, schools, daycares, and factories trying to stay open; all are targets.

This is the latest chapter of war crimes committed by an autocrat who continues to lie to his own people about his intentions of domination. He is attempting to take the territory of another sovereign nation at the horrible expense both to his own soldiers and to the rest of the world.

That world has aligned on the side of democracy against Putin’s axis of authoritarianism.

The fact is, as Ark Valley Voice pointed out nearly a year ago, Putin doesn’t appear to want the Ukrainian people (except thousands of children who are being kidnapped and taken into Mother Russia) and he has no qualms about civilian casualties. Putin wants the geographic territory.

Putin has not done well militarily. So far he is clinging to four Ukrainian regions (Donetsk, Luhansk, Kherson, and Zaporizhzhia) which constitute about 15 percent of Ukraine. In the past few weeks, Putin illegally announced their annexation to Russia.

What if last February, Canada — having declared war on the U.S. — had taken Wisconsin, Minnesota, the Dakotas, and Montana, driving out all the residents of those states, while raining missiles down on Denver, Chicago, Los Angeles, and Washington D.C.?

Most of the civilized world has condemned Russia’s war on Ukraine and stands in awe of the Ukrainains’ ability to defend their country. The world has applauded and supported their determination to remain a democracy under the rule of law. It is clear they cannot do it alone. But if world conflicts of the last century have shown us anything, it is that power-driven autocrats only understand force. They have to be stopped with force — or their quest for power proceeds. Putin has already done this in south Ossetia Republic of Georgia, and in Crimea. No more evidence is needed.

The impacts are being felt around the world. While we’re still adjusting from the COVID-19 economic shock and the supply chain trauma, none of us want to worry about world stability. But the truth is — events appear to indicate that a stand has to be taken, or we run the risk of the results that Chamberlin got when he announced “Peace in our time,” after placating Hitler.

The decision to stand with a determined democracy against a dictatorship is going to be a hard one for the civilized, democratic world. We like cheap gas. We think bread should be abundant. But is there really another choice here?