An air raid siren pierced through silence and prayers during Grygorii Tsekhmistrenko's funeral on Friday — a reminder of how the 28-year-old lost his life.

Tsekhmistrenko, known as Greg to friends, volunteered as a combat medic to fight the Russian invasion of Ukraine, his home country. According to his family, he was killed in action last weekend in Bakhmut, an eastern Ukrainian city that's become an important battlefield in the war.

About 250 people — friends, family and soldiers — gathered at a Kyiv funeral home to see Tsekhmistrenko's casket, draped with both Ukrainian and Canadian flags near a pile of bouquets.

Tsekhmistrenko lived in Kinistino, Sask., for years with his parents before moving to Port Alice, B.C., on Vancouver Island. His parents had recently travelled to Kyiv to spend Christmas with their son.

At the funeral, Tsekhmistrenko's mother crouched by his body, weeping and stroking his hair.

WATCH | At the Kyiv funeral of Canadian volunteer medic killed in Ukraine:

The family of Grygorii Tsekhmistrenko travelled to Kyiv to attend his funeral. The 28-year-old Canadian died in Ukraine while volunteering as a combat medic.

Later in the day, the group moved to a cemetery in a suburb south of Kyiv for the burial.

"He was ready to serve. He loved. He was thoughtful. He was just a great son, and a great friend of mine," Vitalii Tsekhmistrenko told CBC News after his only son had been buried.

Tsekhmistrenko's body was brought back from the frontlines by members of his unit, including a Canadian veteran named Anton, who provided only his first name for security reasons.

Anton, a Ukrainian-Canadian himself who served with the Canadian Armed Forces, said Tsekhmistrenko went to provide medical help to members of the unit after they were hit with a rocket-propelled grenade.

Then, he said a second grenade struck.

"Since Greg is a very big individual, while he was assisting with medical care, he absorbed most of the blast, which is what allowed him to save one of our members who is currently being operated on in the hospital," Anton told CBC News outside the funeral home.

He said Tsekhmistrenko "put everybody ahead" of himself.

"When we were in Bakhmut in the basement, artillery consistently firing, one of our members had a birthday. Greg went over to a safer city and bought a cake for that individual. We celebrated with what small joy we could," said Anton.

"I wasn't aware that [Tsekhmistrenko's] birthday was the next day. He kept that to himself because he never wanted anybody to go out of the way for him." 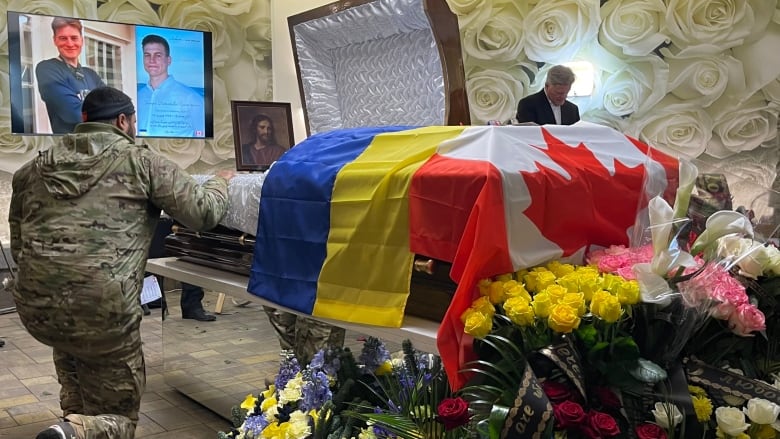 About 250 people gathered at a funeral home in Kyiv for Tsekhmistrenko's funeral, his casket draped in Ukrainian and Canadian flags. (Stephanie Jenzer/CBC)

Anton said he and other members of Tsekhmistrenko's unit are taking some time to grieve, but will head back to the frontlines when they're ready.

"Greg's death has given me the strength — and the team strength — to continue to fight. To continue helping out Ukraine. This is not going to sway us at all."

Andriy Shevchenko is a former Ukrainian Ambassador to Canada, and friend of the family, called Tsekhmistrenko, who is the third Canadian killed during Russia's invasion of Ukraine, a "hero."

"Greg had a choice to stand aside or come here and fight the evil," Shevchenko told CBC News outside the funeral.

"We are in debt to him, and I know that his death and his sacrifice will bring victory closer, and it will bring peace closer."

Tsekhmistrenko was living on Vancouver Island when he left for war in 2022, but spent his late teens in central Saskatchewan. Now, so many in the small communities that populate this area are mourning the young man's life.

"He did what he believed in doing, and I don't want to take away from that. But … he had so much potential and he was doing amazing things every single day," said Darcy Murphy, Tsekhmistrenko's high school rugby coach.

"It's a devastating loss. The world's lost an amazing man."

Murphy first met Tsekhmistrenko when he was 15 at rugby tryouts.

"Right away, it was like 'Who's that kid? Wow, where is he from? Just by looking at him, you could tell he was extremely fit," he said.

"I didn't take Greg very long to be the best player on the field." 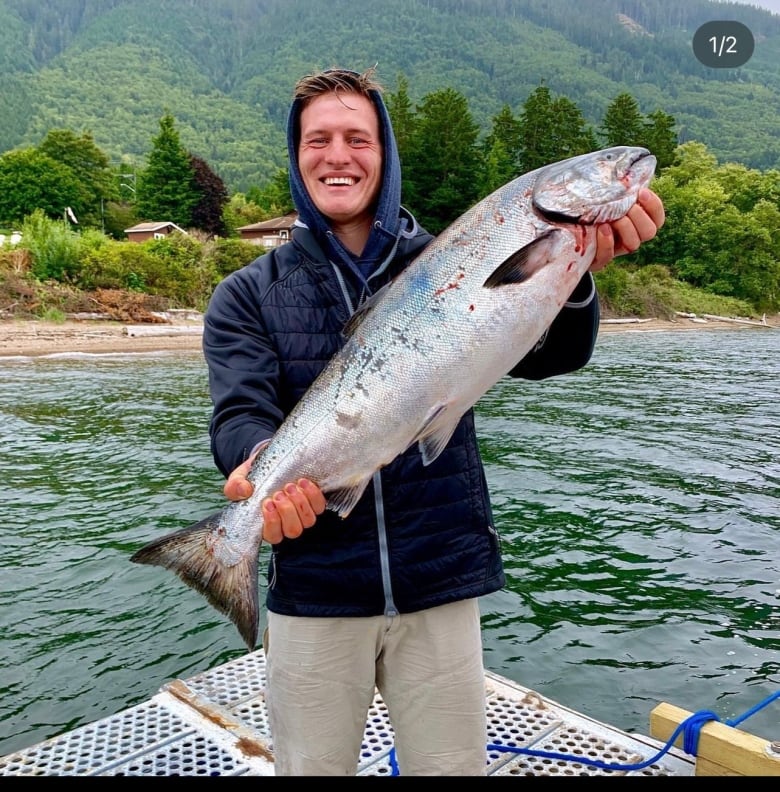 Tsekhmistrenko loved fishing and hiking, according to his father, who had recently travelled to Kyiv to spend the holidays with his son. (Supplied)

Beyond his athleticism, Murphy remembers Tsekhmistrenko as a "very smart" kid.

"Of all the years I knew him, and especially playing rugby on the field, I never heard him yell. But I always heard him laugh."