A summit of French-speaking nations is taking place in Tunisia this weekend, with 30 leadrs focused on economic cooperation in an event seen as a success for Tunisia's President Kais Saied, more than a year after he came to power in a coup.

While the two-day summit will officially focus on "digital as a vector of development", it will also be an opportunity for Western and African leaders to discuss topics such as the Russian invasion of Ukraine, where there is a gap on positions.

Many African countries have been critical of what they perceive as a lack of international solidarity with the continent in the face of its own crises, noting that Europe managed to quickly mobilise to come to the aid of Ukraine.

This 18th summit of the International Organization of La Francophonie (OIF) on the island of Djerba will also be an opportunity to celebrate the belated 50th birthday of an organisation founded in 1970 and with 88 members -- not all of whom are French-speaking, with Armenia, Egypt, Moldova, the United Arab Emirates and Serbia included.

The summit coincides with the final phase of the COP27 on the climate in Egypt and follows a meeting of the G20 in Indonesia which was dominated by the war in Ukraine, an observer country within the OIF.

The re-election of the Secretary General of the OIF -- Louise Mushikiwabo from Rwanda was the sole candidate -- is also on the program of the two days of meetings between representatives of an area of ​​321 million French speakers who will more than double to 750 million in 2050, thanks to African demographics.

Before the summit, Ms Mushikiwabo told AFP that she wanted to ask member states to "redouble their efforts" in the face of a decline in the use of French at international organisations.

Despite critical voices denouncing an "inaudible" Francophonie , Mushikiwabo deemed her organisation "more relevant than ever" and able to "bring a little added value" to "most of the world's problems", citing COP27 .

According to an official from Canada, a heavyweight in the Francophone world, the organisation "can be a positive force" on issues such as "peace, economic prosperity and the consolidation of democracy".

This official indicated that Canada also wanted to echo, during the summit, the "concerns" for "democratic participation" in Tunisia since President Saied seized full powers in July 2021, and which is going through a serious socio-economic crisis. 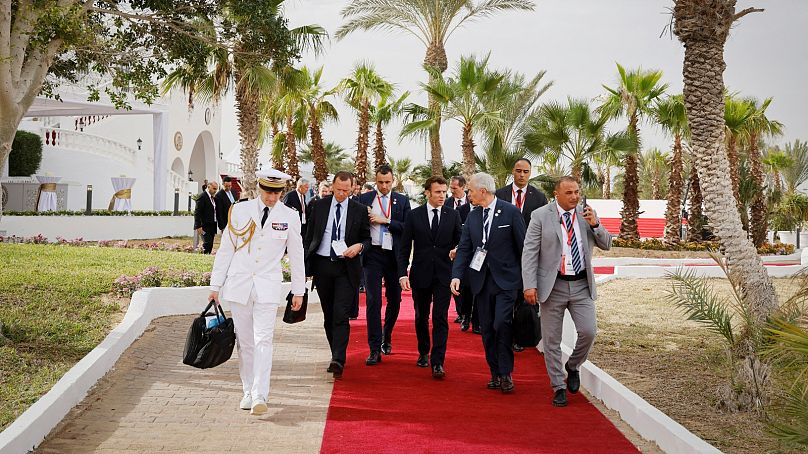 France's President Emmanuel Macron (C) talks with his advisers during the 18th summit of French-speaking countries in Djerba, November 19, 2022.

Emmanuel Macron will not be giving a speech at the Francophonie summit in Tunisia, but he plans to raise the Ukrainian issue behind the scenes to try to garner support at the end of a long diplomatic tour.

After the G20 in Bali and the Apec meeting in Bangkok, the French president has called on more countries to join the "growing consensus" against the war.

And several leaders of the French-speaking community had indicated they wanted to talk about the war in Ukraine.

Macron will have a number of bilateral meetings during his stop in Djerba, including with the Tunisian president, and Armenian prime minister.

The French president lamented that "in the Maghreb countries, less French is spoken than 20 or 30 years ago", citing "quasi-political forms of resistance", the ease of using English and the difficulty of accessing books in French at affordable prices.

He went on to say that "we must have a project of reconquest", urging that the French language be made "hospitable" again by showing that it is possible to speak a French that is "not necessarily academic", but a language that facilitates trade.

For the African continent, "it is the true universal language", "the Francophonie is the language of pan-Africanism", he added.