Before it was hit by missiles, Polish grain facility was used as shelter for Ukrainians fleeing war

Before it was hit by missiles, Polish grain facility was used as shelter for Ukrainians fleeing war

Frederico Viola, a vice president at Agrocom, said the two men who died in the missile attack – Bogdan Wos and Bogdan Ciupek – were both longtime employees. Mr. Wos had also run a shelter for Ukrainian refugees inside the office space of the company’s warehouse.Anna Liminowicz/The Globe and Mail

Bogdan Wos wasn’t going to sit around his house in the village of Przewodow in eastern Poland and do nothing when Ukrainians began streaming across the border in February seeking safety from Russia’s invasion.

Mr. Wos, 62, was the kind of guy people in Przewodow turned to for help. Neighbours called him the heart and soul of the community, the man who greeted everyone with a smile, a warm hello and often a hug.

So it wasn’t surprising that Mr. Wos led the village’s 500 residents in supporting Ukrainian refugees. His employer, Italy-based Agrocom, agreed to allow the office space in its warehouse in Przewodow to serve as a makeshift shelter and Mr. Wos quickly filled it with refugees.

He worked day and night making sure they had clothing, food and other essentials. By the time the shelter wound down operations a couple of months ago, Mr. Wos had supported more than 200 Ukrainians and helped many move on to other countries.

Then on Tuesday a cruel twist of fate shook Przewodow. At least one missile, likely fired by Ukraine’s air defence forces, slammed into the Agrocom warehouse at around 4 p.m. The building, once a safe haven for Ukrainians fleeing the war, was destroyed. Mr. Wos and another long-time employee, 60-year-old Bogdan Ciupek, were unloading a truck filled with corn when the rocket hit. Both died on the spot.

Polish officials have said that the evidence so far suggested the deaths were the result of an errant Ukrainian rocket. “There are many indications that a missile used to shoot down Russian missiles missed its target, and then the self-destruct system failed to work and this, unfortunately, led to tragedy,” Jakub Kumoch, a foreign policy adviser to President Andrzej Duda, told Polish television on Thursday.

Officials in Ukraine have disputed that conclusion. They have cited evidence the missile was fired by Russian forces and Ukraine’s President Volodymyr Zelensky has said that officials from his country should be allowed to join the probe into the strike. Meanwhile the Russians have insisted that their military has not fired any rockets into Poland.

None of the finger pointing has provided much consolation for people in Przewodow.

Even though the village is just three kilometres from the Ukrainian border, the war feels a lot closer now and many people fear another missile strike could happen at any moment. They also mourn the madness of war, how it shattered a place that once offered hope to so many people and killed a man who only wanted to help.

She used to volunteer at the shelter and she marvelled at Mr. Wos’s dedication to the refugees. She recalled one night when he dropped everything and rushed to the border to pick up a Ukrainian mother and her five children. “He looked for Pampers for the kids. He did shopping for them,” she said. “He was a guy with a big heart.”

She shook her head at the awful irony that her friend may have been killed by a Ukrainian missile. It’s in God’s hands, she said. “He was a boy who helped them so much, he must have had to die. Apparently that was his destiny.”

Mr. Wos and his wife, Jozefa, had deep roots in Przewodow. He spent 22 years working for Agrocom and helping farmers bring in their crops. Ms. Wos has worked as a janitor at the primary school for 20 years and the couple devoted countless hours volunteering at local events, all while raising two sons.

Frederico Viola, a vice-president at Agrocom, said Mr. Wos was among the first employees the company hired when it launched its Polish operation. Mr. Ciupek started a couple of years later and the pair were affectionally known as Bogdan 1 and Bogdan 2 by the 23 other staff.

Mr. Viola, who lives in a nearby town, said Mr. Wos touched many lives through his work at the shelter. “A lot of people from Ukraine who lived there have called us to leave condolences for this guy because they remembered him so well,” Mr. Viola said Thursday. “He was there every day, in the afternoon, in the night. When they needed something, he was there.”

Mr. Duda visited the village on Thursday. He met with relatives of Mr. Wos and Mr. Ciupek, and toured the site of the missile strike. Standing along a muddy road after the visit, Mr. Duda told reporters that Poland doesn’t blame Ukraine for what happened. “We are sure and all indicators show this was a terrible and tragic accident,” he said.

When asked what he said to the villagers he met, he replied: “What can I say in such a difficult situation?” 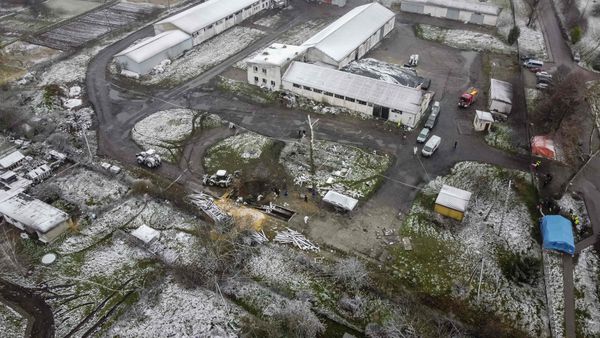 A missile strike killed two men, Bogdan Wos and Bogdan Ciupek, in the eastern Poland village of Przewodow, near the border with war-ravaged Ukraine, on Nov. 15.WOJTEK RADWANSKI/AFP/Getty Images

In late afternoon, as the sun began to set, Ewa Byra sat in her office in Przewodow’s primary school and reflected on Mr. and Ms. Wos. Ms. Byra has been at the school since 1983, first as a teacher and then as principal for the past 12 years.

The school reopened on Thursday for the first time since the missile strike, and small black ribbons fluttered from the flag poles and windows. “There’s fear, of course, and dismay,” Ms. Byra said of the school’s reaction to the blast.

She’s brought in counsellors for the 71 students, and she and some teachers have met with Ms. Wos to offer support. She sighed when asked what Mr. Wos meant to the village. “You didn’t have the opportunity to meet him,” she said. “He was a man who emanated empathy. He was constantly smiling and always kind. Just a really good person.”