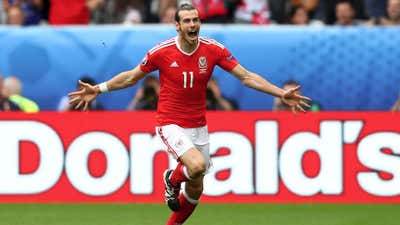 Wales may not have managed to shine at World Cup 2022 but the Dragons did enjoy a memorable Euro 2016 campaign, reaching the semi-finals of the tournament before going out to eventual winners Portugal.

Bale was, of course, at the heart of everything and got Wales off to the best possible start with the team's opening goal in a 2-1 win over Slovakia.

A dipping free-kick just before half-time gave Wales the lead, although goalkeeper Matus Kozacik probably won't want to watch too many replays of the strike.

The goal seemed to fill Wales with belief and saw them progress as runners-up from their group.

Wins over Northern Ireland and Belgium in the knockout rounds followed before their dreams were finally ended. 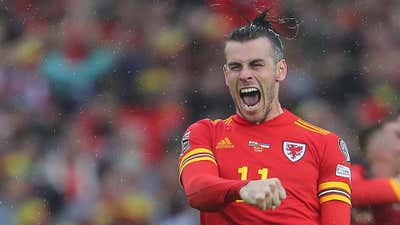 Free-kick to get Wales to 2022 World Cup

Wales booked their place at World Cup 2022 by overcoming Ukraine in a qualifier in Cardiff.

A tight game was decided once again by Bale as he scored the winner from a free-kick to book the Dragons' place in Qatar.

This time the captain needed a little bit of luck. Indeed it was Ukraine captain Andriy Yarmolenko who inadvertently headed his effort past his own goalkeeper in the first half.

It may not have been Bale's prettiest goal but it did end Wales' 64 years of World Cup hurt.

Bale hailed the win as the "greatest result in Welsh football history" after the match and perhaps ensured any potential retirement plans were delayed for just a little bit longer. 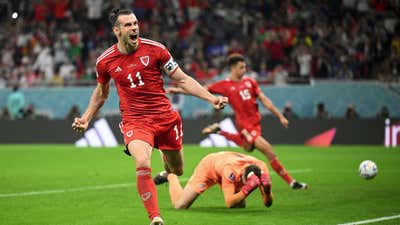 Wales made it to Qatar 2022 for their first World Cup appearance since 1958 but couldn't make it past the group stages as they suffered an early exit.

Bale's heroics had ensured Wales a place at the tournament and he did, at least, go home with a cherished World Cup finals goal to his name.

The LAFC forward salvaged a point for Wales in a 1-1 draw against the United States, winning a penalty in the second half and promptly dusting himself down to take the kick.

Bale made no mistake at all from the spot, sending a ferocious strike past a helpless Matt Turner to give the travelling fans something to cheer.

Signing off with Spurs in style

Bale's final Premier League goal in his first spell at Spurs was one to remember as he snatched all three points in a 1-0 victory over Sunderland.

The Welshman curled home a brilliant effort from range in the 90th minute that left goalkeeper Simon Mignolet with absolutely no chance at all.

There's signing off in style - and then there's @GarethBale11

Tottenham then lost Bale over the summer as he completed his record-breaking move to Real Madrid. He departed England after scoring 53 goals in 166 Premier League appearances and he certainly signed off in style. 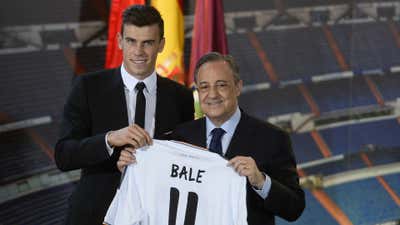 Becoming the world's most expensive player

Real Madrid made Bale the most expensive footballer in the world when they signed the forward from Tottenham back in 2013.

Bale arrived at the Santiago Bernabeu on a six-year deal worth €100 million (£85m) which eclipsed the £80m the club had previously spent on bringing Cristiano Ronaldo to the club from Manchester United.

The transfer saga had actually turned a little ugly, with Bale skipping Spurs training before finally completing his world-record move to the Spanish capital.

Bale left Spurs after a season when he scored 26 goals for the north London club and was named the Professional Footballers' Association's and Football Writers' Player of the Year. 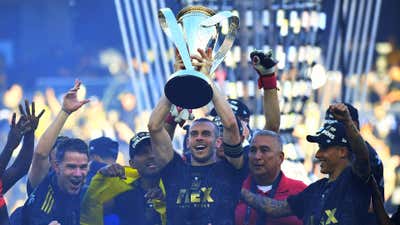 Bale only managed 13 appearances in his brief time at LAFC, and just two were as a starter, but still departed with a trophy and his named etched into the club's history.

The Welshman started the MLS Cup final against Philadelphia Union on the bench but came on and delivered the goods, and then some, for his team when they needed him most.

Philadelphia had taken a 3-2 lead deep into stoppage time at the end of extra-time and looked set to claim victory, but they hadn't reckoned with Bale.

The former Real Madrid man equalised in the 128th minute to take the game to penalties, which LAFC won 3-0 to lift the MLS Cup for the first time in their history. 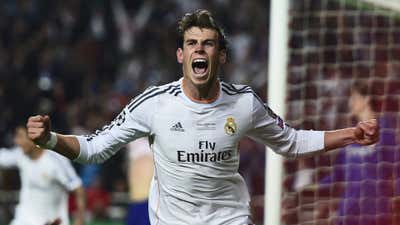 Scoring in the final to help seal La Decima

Real Madrid are the most successful side by some distance when it comes to lifting the European Cup and finally made it into double figures in 2014.

The final saw Los Blancos come up against city rivals Atletico Madrid in a breathless final in Lisbon. Real went on to win 4-1 to seal 'La Decima'.

Atletico had looked like pulling off a shock after taking the lead through Diego Godin, but Sergio Ramos levelled for Real Madrid with just 90 seconds of normal time remaining to send the game into extra-time.

And that's where Bale popped up with yet another vital goal. The Welshman headed home from a tight angle after Thibaut Courtois had blocked an effort from Angel Di Maria to put Madrid in front for the first time.

Late goals from Marcelo and Cristiano Ronaldo added some gloss to the scoreline, but there's no doubt that Bale's was the match-winning moment. 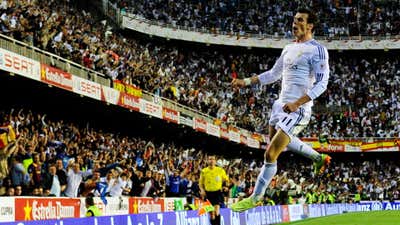 Bale got his hands on his first major piece of silverware in 2014 when he picked up the Copa del Rey after inspiring Real Madrid to victory against Barcelona in the final.

The game was delicately poised at 1-1 with five minutes of normal time remaining when Lionel Messi lost possession, allowing Los Blancos to hit them on a devastating counter-attack.

Bale picked up the ball on the left flank and embarked on an unstoppable run. The Welshman knocked the ball past Marc Bartra, actually running off the pitch as he took off in pursuit.

The forward then showed incredible speed to sprint clear and fire past goalkeeper Jose Manuel Pinto to seal a 2-1 win for Los Blancos.

Having netted a hat-trick in the San Siro in the first instalment of this Champions League group game against the holders, Bale shone again when Spurs took on Inter in the return at White Hart Lane, and this time it was Maicon who felt the full power of the Welshman.

The winger was great in Milan but somehow even better under the lights in north London. Bale simply ripped the Brazilian to shreds all night long as the hosts secured an impressive 3-1 victory.

He set up goals for Peter Crouch and Roman Pavlyuchenko on a night when he made the whole of Europe sit up and take notice.

Maicon admitted after the game he simply couldn't control the brilliant Welshman. If it's any consolation, he certainly wasn't the only player to feel that way. 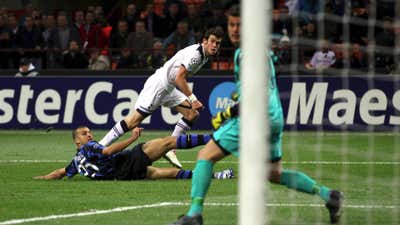 THAT San Siro hat-trick with Spurs

Bale announced himself on the world stage with THAT hat-trick for Tottenham against Inter at San Siro in the Champions League all the way back in October 2010.

The forward's three goals weren't enough to prevent Tottenham from slipping to a 4-3 defeat in a thrilling game but certainly showed the world that the north Londoners had an absolute gem on their hands.

Inter went 3-0 up inside just 15 minutes and added a fourth before half-time in a devastating 45 minutes of football from the then-champions of Europe.

Spurs looked dead and buried but Bale showed there was life in the club with a brilliant goal to make it 4-1. The Welsh wonder raced 50 yards down the left wing and then fired past goalkeeper Julio Cesar.

Bale's second goal in stoppage time was similar to his opener, with Javier Zanetti left trailing in his wake as he blazed upfield and made it 4-2.

The 21-year-old completed his hat-trick minutes later after rifling home another angled shot in the penalty area.

There was to be no fairytale comeback for Spurs that night but Bale's performance will live long in the memory. 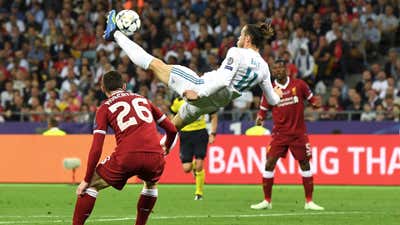 Bale came off the bench to score twice and win the Champions League for Real Madrid against Liverpool in 2018 in a game which may just have delivered the greatest ever goal scored in a European Cup final.

It came, of course, from the left boot of Bale and made it 2-1 to the Spanish giants.

Bale had only just arrived from the bench when Marcelo sent in an inviting cross from the left wing, and the Wales international pulled off an outrageous overhead kick to put Madrid in front.

Congratulations on an incredible career, @GarethBale11 👏

It was the sort of goal fit to win any match in the world and it certainly won this one.

Bale still had time to add a little gloss to the scoreline by netting Madrid's third late on, with a little help from Loris Karius, but it's his first goal that goes down as one of THE great Champions League moments.