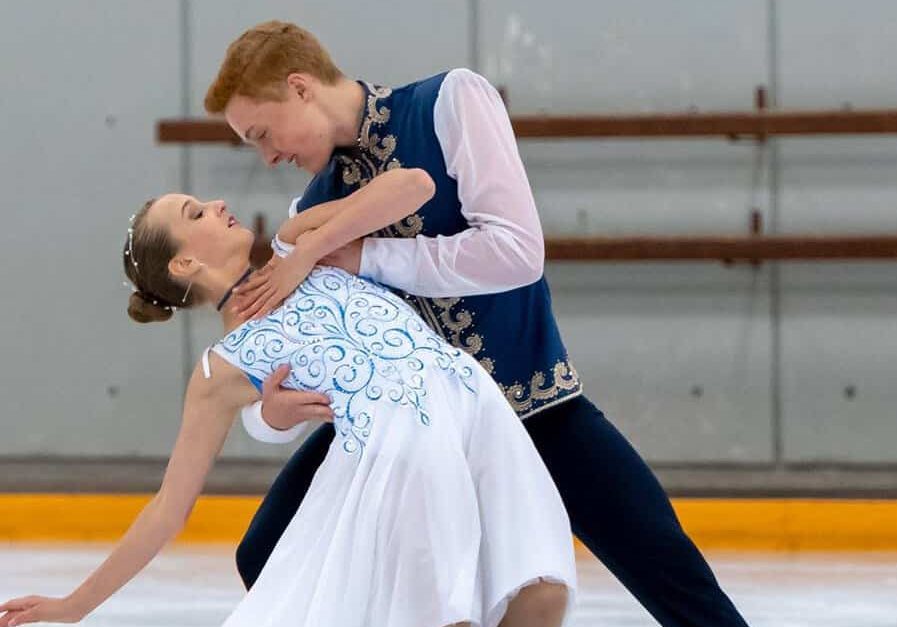 The invasion meant a great deal more than a scheduling change to Ukrainian-Canada ice dancer Nadiia Bashynska,19, and her partner, English-Canadian Peter Beaumont, 21, who had been using a medley of Russian folk songs, including the military-themed Katyusha, in their routines.

The invasion meant a complete re-working of their free program as Bashynska – with the full blessings of Beaumont and their coaches at the Scarborough Figure Skating Club – was determined to purge all Russian influences from their skating.

But if the invasion and the upheaval to their much-practiced routine were tests to determine if the Ajax skaters – lightly regarded internationally at the time – were mentally up to the task, the duo passed with flying colours, earning a bronze at the competition.

Bashynska and Beamont, who have been skating together since Beamont came over from England in 2017, haven’t looked back and are in fact unbeaten this year and the favourites to win their first Canadian Junior Ice Dance title at the national championships being held this week in Oshawa.

Both have been skating since 2006 and both started their careers with different partners; Bashynska in Ukraine before she and her family immigrated to Canada and Beaumont in England – he was a British Novice Ice Dance champion in 2015 – before coming here to skate with Bashynska.

The pair won the Canadian Novice title in 2018 and have racked up a treasure chest of honours since moving to the junior ranks, including four ISU Grand Prix medals, back-to-back Canadian championship silver medals, a Skate Canada Challenge gold and the 2022-23 Junior Grand Prix championship, the first Canadians to accomplish that since Tessa Virtue and Scott Muir in 2005.

This season they are three-for-three in international competitions heading into the nationals, which will have them skating for the title on ‘home’ ice Tuesday and Wednesday.

InDurham caught up with the skaters, who will be looking to use the nationals as a springboard to a gold medal at the World Championship before graduating to the senior ranks next fall.

InDurham: I don’t mean to jinx you two, but you’ve had a heckuva season so far. How hard is it mentally to stay on top of your game, to get the dance routines, the athleticism down each and every time?

Nadiia: We both have been in this sport since our childhoods, and we both have the same goals in the sport. It takes an incredible amount of dedication to stay on top of our training plan. We train multiple hours on and off the ice, inspiring each other everyday and push ourselves through the toughest days.

InDurham: At the Junior Grand Prix you guys won gold the same time as your training mates Piper Gillies and Paul Poirier won gold at the senior level. How cool was that and how cool is it to train with such accomplished and experienced skaters?

Nadiia: Piper and Paul have been inspiring us for many years. It was an incredible experience to compete alongside them. For both of us to win was the most surreal feeling. The four of us were incredibly proud of each other, and excited to bring two sets of gold medals to our home club SFSC Ice Dance Elite.

InDurham: The 2022 World Junior Championships were difficult for both of you, but especially for you Nadiia, as they happened soon after the Russian invasion of Ukraine. Yet you both pushed through and earned a bronze. That shows impressive mental strength, something you’re both going to need to rise in the senior ranks. How did you guys feel when it was over?

Nadiia: We were relieved and proud of how far we had come. The first few weeks of the invasion were the hardest, staying in touch with family and trying to see what we can possibly do to help. We knew that choreographing a new program comes with its risks and others had plenty more time to prepare, yet we only had a month. Despite this, we were able to push through and medal which exceeded all of our expectations.

InDurham: Peter, you moved here to skate in 2017 and you were skating with Nadiia by June. How did that come about?

Peter: In 2017 I was on a figure skating partner search site. Nadiia’s parents and coach found my profile and contacted my then coaches. We arranged a try-out and I came over to Scarborough in late January. Both Nadiia and I felt as though we clicked with each other, and that a partnership would work. I moved to Canada in June, as I was finishing my high school examinations, and ever since then, I have lived alongside Nadiia’s family.

InDurham: What are your expectations for next week? Are you confident you will be crowned Canadian Junior champions?

Nadiia: We’ve worked really hard and our goal is to win and get personal best scores for both Rhythm Dance and Free Dance. We are excited to perform for our home crowd in Durham.

InDurham: I assume you will stay in junior until the Worlds. What are your expectations for next year at the senior level? And in 2026?

Nadiia: We are aiming to move up to senior with a bang. We want to impress people with new mature programs and performances, hoping for opportunities to represent Canada at an international level, and to be closely competing with the top teams in Senior. As well, of course, our goal is to make the Olympic team in 2026, but everyone goes their own path so we will keep our concentration on the short term goals for now.