You are here: Home › Under relentless Russian bombardment, Severodonetsk and other eastern Ukrainian cities are slowly dying

Under relentless Russian bombardment, Severodonetsk and other eastern Ukrainian cities are slowly dying

A firefighter waits for more water pressure outside a house set ablaze during shelling in a residential neighborhood in Lysychansk, Ukraine, on Saturday. How does a city die? To find out, turn to Severodonetsk, at the very edge of the Ukrainian government’s control on the eastern front, and currently the focal point of the fight between its soldiers and the Russians who have invaded. Viewing Severodonetsk from across the river that separates it from its sister city Lysychansk, one witnesses the spasms in real time: Almost a dozen columns of smoke wreathe the skyline where tons of Russian ordnance smash through a building and start a fire, the flames twinkling in the distance like a votive candle. A crew stands ready with a heavy armored vehicle at a makeshift Ukrainian military base in Lysychansk on June 9, 2022. Ever since Moscow turned its sights on the Donbas, which encompasses the war-riven east Ukrainian provinces of Luhansk and Donetsk, the city of Severodonetsk, Kyiv’s seat of power in Luhansk, has been a key target. In May, a combined force of Russian troops, separatists and Kremlin-allied Chechen fighters blitzed into the city, taking a series of Ukrainian positions in residential neighborhoods. The signs are obvious: There’s no electricity, let alone internet or phone service. Residents take advantage of a quiet morning to collect water before the bombardment begins in Lysychansk, Ukraine, on Saturday. Driving is a fraught, nerve-racking game: With artillery batteries assisted by drones hunting for prey, the banshee-scream of incoming Russian ordnance reverberates often across the deserted boulevards. It’s a game in which the Ukrainians are almost hopelessly outmatched, they say.

Under relentless Russian bombardment, Severodonetsk and other eastern Ukrainian cities are slowly dying

“To compare," he said, "they're using one ton; we're using a kilogram. Facing such a barrage, whether in the Donbas or on other fronts, has been costly. Those losses have spurred Ukrainian officials to plead with Western nations for more ammunition and better weapons, especially long-range multiple- launch rocket systems, or MLRS. “We have Russian logistical hubs nearby that we can’t reach. “We wouldn’t be in this situation if we had the MLRS months ago," she said. Nikolai, who did not give his last name, stands outside his home, which caught on fire during shelling in Lysychansk, Ukraine, on Saturday. On Saturday, a series of shells arced into a neighborhood nestled on a hill in Lysychansk that faces Severodonetsk. It wasn’t enough: Soon a hole opened up in the ceiling, dumping a shower of ash and red-hot embers into a corridor while Nikolai ran in and tried to gather up some of his family's belongings. By the time a lone firetruck showed up — it was the only one still undamaged, department officials said, adding that they deal with 10 to 15 fires a day, all caused by shelling — there didn’t seem much left to save. “It’s like they’re watering a garden,” he said of the firefighters, before turning away and taking another drag of his cigarette.

A man tries to put out a fire with a bucket of water as the ceiling collapses in a home damaged in bombing that destroyed the home next door in Lysychansk, Ukraine, on Saturday. Despite the calamity, he and his family would stay, he said. Many of those who have stayed appear nonchalant about the prospect of Russian rule. During the fighting for a town adjacent to Severodonetsk, Artyom and his comrades came under heavy shelling near a house. Such attitudes have given the Russian army an edge it didn’t have in its earlier forays around Kyiv and Kharkiv, where residents would report Russian troop movements to Ukrainian authorities to help destroy them. “They’re all Russian spies here,” he said, watching a lone cyclist go past the Lysychansk stadium where he and a few others had parked. “If we have to withdraw from here, there are some people I’m going to shoot dead before we go because they’re so Russian,” Akhmedov said. In the meantime, the slow death of the two cities drags on. “We have more than 180 people here in total, all from shelling,” said Yuri, a police officer who turned solemn as he walked among the graves. “Most of them are identified, but some of them we can’t, because there was too much damage.

Russia bears down on key city in eastern UkraineIn the Donbas region, this destroyed bridge used to connect the cities of Lysychansk and Severodonetsk. Photo: AFPRussian forces threatened to encircle a crucial eastern Ukrainian city on Wednesday as Moscow said the West must drop sanctions to end a global food crisis. Ukrainian officials said fierce fighting had reached the edge of the industrial hub of Severodonetsk, under relentless bombardment by

Polish President Andrzej Duda, speaking in Kyiv on Sunday, underscored his nation’s key support for embattled Ukraine as Russian forces pursued a relentless bombardment of frontline cities in the east. Ukrainian President Volodymyr Zelensky is set to address the World Economic Forum via videoconference on Monday. And in the eastern city of Severodonetsk, a focus of recent fighting, regional governor Sergiy Gaiday said Russian forces were “using scorched-earth tactics, deliberately

Category: Ukraine, Russia.
Tag: ukraine part of russia, Ukraine Says Severodonetsk City Now, Under Russian Control, under russian control, the russians sting, the russians and the world could learn from the diplomacy of morocco.

Russian troops last night reached the limits of the eastern Ukrainian city of Severodonetsk – with fears relentless attacks will turn it into ‘the new Mariupol’. Severodonetsk, with a pre-war population of around 100,000 people, is among key urban hubs in the industrial Donbas region on Russia’s list of military goals. ‘The coming week will be decisive,’ Mr Haidai said as he accused Russia of piling an ‘insane’ number of

People in Severodonetsk, in eastern Ukraine, have been under Russian bombardment since February 24. Volunteers trying to help people evacuate find many unsure about whether it's safer to leave the city or stay there.

Talks between Russia and Ukraine produced no results Thursday, as outrage grows over Russia's bombing of a maternity hospital in Mariupol. As the death toll rises among civilians pinned down by relentless attacks, Russian forces are slowly advancing on multiple cities and Ukrainian officials estimate damage from the war has reached $100 billion in two weeks of war. Nick Schifrin reports. 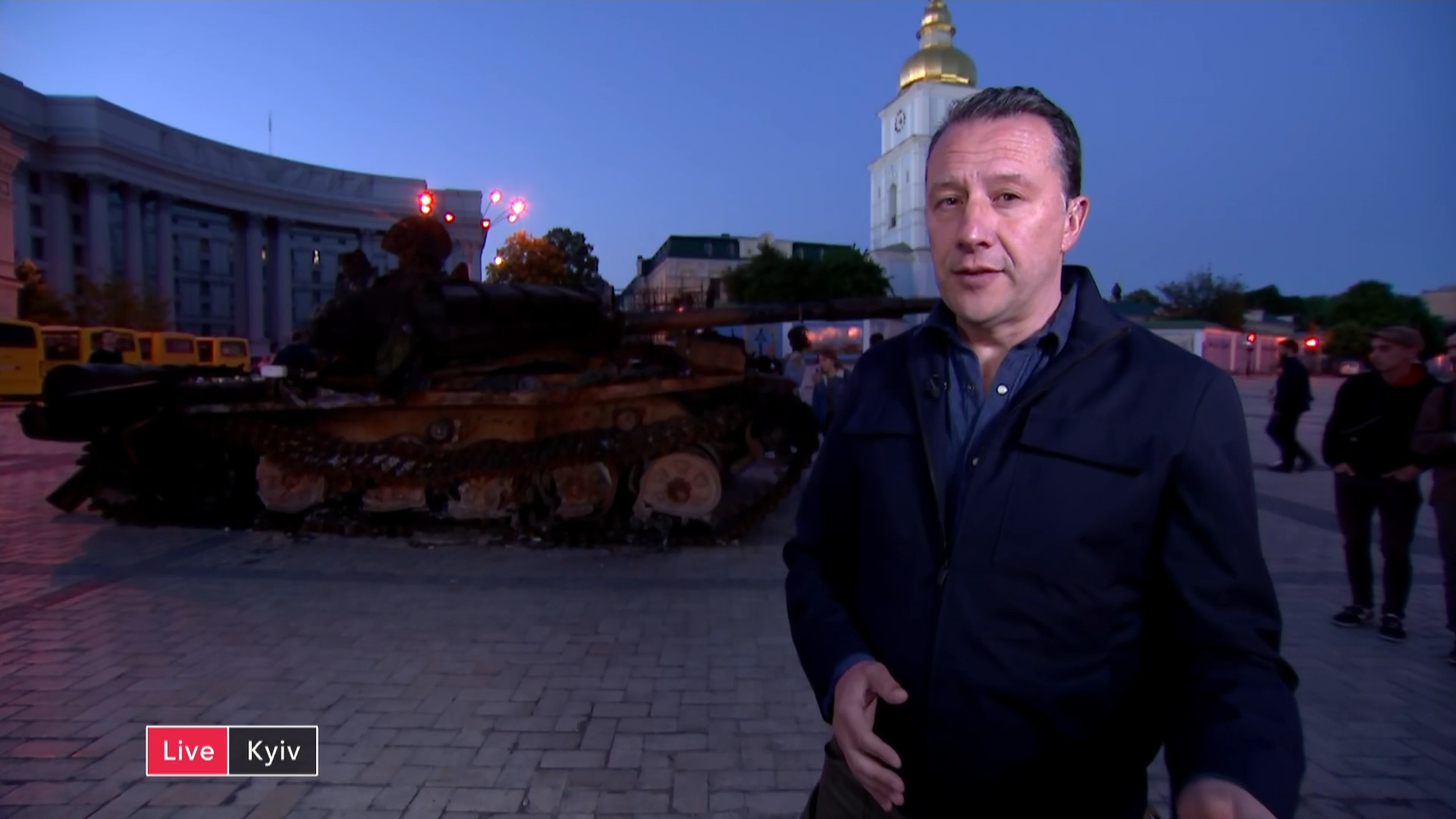 Ukraine’s military chief has warned that Russia has launched its heaviest offensive yet in the embattled Donbas region – with forces advancing on the last cities still in the hands of the Ukrainian army. One city – Severodonetsk – is now surrounded on three sides and is under intense bombardment – with as many as 15,000 civilians thought to be hiding in shelters.

KYIV (AFP) - Russian forces inched towards Kyiv and pounded civilian areas in other Ukrainian cities Friday, drawing warnings of "unimaginable tragedy" as the US and the EU moved to tighten the economic noose around the Kremlin. "Hundreds of thousands of people... are for all intents and purposes besieged," Stephen Cornish, one of those heading the medical charity s Ukraine operation, told AFP in an interview. As Russia widens its

Russian forces waged an all-out assault on May 24 to encircle Ukrainian troops in twin eastern cities straddling a river, a battle that could determine the success or failure of Moscow's main campaign in the industrial heartland of Donbas. (Source: Reuters)Russia is attempting to seize the separatist-claimed Donbas' two provinces, Donetsk and Luhansk, and trap Ukrainian forces in a pocket on the main eastern front. (Source: Reuters)Russian forces took control

Where did Ukraine bomb in Russia?

What city did Ukraine take back?

KYIV, UkraineâUkrainian forces managed to retake parts of the city of Severodonetsk in a counterattack, as they try to hold off the Russian offensive in eastern Ukraine while Kyiv waits for new long-range rocket systems from the U.S. More info : What city did Ukraine take back?

Did the Ukraine used to be part of Hungary?

What is happening in Mariupol?

Mariupol is almost fully under Russian control, with much of the city destroyed in weeks of heavy Russian bombardment and intense street fighting. Taking the port city is a key Russian war aim, and some of Russian troops there have already been released to join Moscow's wider offensive in the eastern Donbas region. More info : What is happening in Mariupol?

Are coral reefs dying from pollution?

And they are dying. Coral reefs are under relentless stress from myriad global and local issues, including climate change, declining water quality, overfishing, pollution and unsustainable coastal development. More info : Are coral reefs dying from pollution?