You are here: Home › Horror as Russia demolishes civilian escape route out of besieged Sievierodonetsk

Sign up for our news briefing, including a daily special Russia-Ukraine edition We use your sign-up to provide content in ways you've consented to and to improve our understanding of you. Local officials have confirmed that a bridge which joins the city to its sister city Lysychansk has been destroyed in a move that has blocked a main civilian escape route. The fighting in the east has been some of the bloodiest since Russia invaded Ukraine at the end of February. The head of the Sievierodonetsk region reported that it is believed one third of the city remains in Ukrainian control with two thirds in the hands of the Russians. In his nightly address to the nation, Ukrainian President Volodymyr Zelensky said: “The key tactical goal of the occupiers has not changed: they are pressing in Sievierodonetsk, severe fighting is going on there – literally for every metre. He added that reserve forces in the Russian army are being redeployed to help the mission in Donbas.

Following the circulation of an image of a 12 year old girl who was injured in a Russian strike, Zelensky said that “these very facts underscore the way in which Russia is seen by the world”. He added: “Not Peter the Great, not Lev Tolstoy, but children injured and killed in Russian attacks. Last week Putin compared his actions to those of the Russian emperor Peter the Great’s 18th century conquest of lands held by Sweden. The Governor of Luhansk province, Serhiy Gaidai said that Russian and Ukrainian forces were fighting street by street on Sunday in Sievierodonetsk. READ MORE: Putin health fears reignited as Russian leaders seen shaking He said: “About 500 civilians remain on the territory of the Azot plant in Sievierodonetsk, 40 of them are children. Mr Gaidai confirmed the Russians had destroyed the bridge and said: “If after new shelling the bridge collapses, the city will truly be cut off.

“There will be no way of leaving Sievierodonetsk in a vehicle” as there are no evacuation corridors or a cease-fire. The latest Ministry of Defence update said: “Russia is using its overmatch in force ratio and artillery to gradually seize territory in and around Severodonetsk. DON'T MISS: POLL: Would YOU buy an electric vehicle as petrol prices soar? (POLL)Queen kept ‘wonderful’ secret from family for Jubilee (INSIGHT)China vows to fight ‘bully’ US ‘to the end’ for Taiwan (REVEAL) On the weekend it was announced that a former British soldier was shot dead while fighting for Ukraine in Sevierodonetsk. Jordan Gatley, 24, flew to Ukraine on March 18 after leaving the British Army in March after six years to sign up to the International Legion of Territorial Defence of Ukraine. Tributes have been pouring in on social media with the advisor to the Ukrainian President, Mykhailo Podolyak tweeting: “It takes a lot of courage to leave home and go thousand miles to defend what you believe in.

Russia planned to open humanitarian corridors in Ukraine Tuesday for civilians to flee besieged cities, but Kyiv insisted the move was a publicity stunt and people would not be able to escape. But Ukrainian President Volodymyr Zelensky accused Russia of reneging on previous escape route agreements, and trying to stop people such as by planting explosives on roads. Russian forces "suffered losses and retreated" in Izium after they "reigned terror

WAR IN UKRAINELive: Russia announces opening of several humanitarian corridors in UkraineLocal residents escape from the town of Irpin, after heavy shelling landed on the only escape route used by locals, as Russian troops advance towards the capital of Kyiv, in Irpin, near Kyiv, Ukraine March 6, 2022. © Carlos Barria, ReutersText by: FRANCE 24 Follow 2 minThe Russian army announced Monday that it would open several humanitarian corridors in

Russian pledges for a civilian escape route out of Ukraine are “just cynicism”, Ukrainian president Volodymyr Zelensky has said. Three consecutive evacuation attempts were called off over recent days, with Ukraine accusing Russia of continuing to shell civilians as they tried to flee. On Monday, Russia announced humanitarian corridors out of four key Ukrainian cities – but in two cities the routes led directly to Russia or its ally, Belarus. 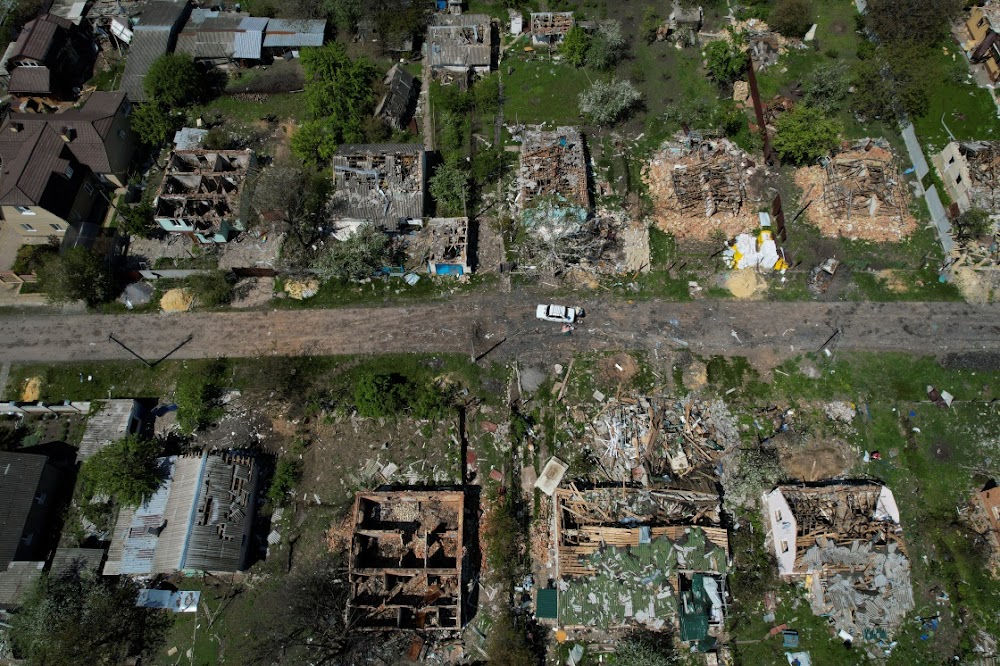 He headed for Ukraine where he had gained admission into the Kharkiv Institute of Medicine and Biomedical Sciences to study medicine. That was how Denis packed his bag and started looking for an exit route from Kharkiv, Ukraine. Long tough journey to HungaryGrateful that finally, he was on his way out of the besieged city of Kharkiv, Denis was soon confronted with another problem. Luckily for Denis, he met another

"Mariupol is a crisis within a crisis," he said. "Thousands of civilians need life-saving assistance, many are elderly and in need of medical care, or have limited mobility. They need an escape route out of the apocalypse."

Russian forces on Tuesday attempted to encircle the twin cities that represent one of the last pockets of Ukrainian-controlled territory in Luhansk Oblast, The Guardian reports. Sievierodonetsk and Lysychansk, located on opposite banks of the Siverskiy Donets river, are home to a combined population of around 200,000. As Russian troops shelled the cities and the neighboring towns, some 15,000 people who were unable to escape sought shelter in Sievierodonetsk. ⚡️UK

The photograph has become a worldwide symbol of Russia’s brutality toward Ukrainian civilians. All were dead or soon would be, from the force of Russian mortars. There had been no Ukrainian forces where the mortars landed, suggesting Russia might have been targeting a civilian escape route near Kyiv. If so, it was part of Russia’s larger campaign to demoralize Ukraine by killing and wounding ordinary people, a strategy the Russian

1 A man and a child escape from the town of Irpin, after heavy shelling on the only escape route used by locals, while Russian troops advance toward the capital of Kyiv, Ukraine, March 6, 2022.

When was Mariupol theatre bombed?

A woman who survived the bombing of a theatre in Mariupol has said she believes the panic of the crowd rushing to escape killed more people than the strike itself. The building sheltering more than a thousand civilians in the besieged southern Ukrainian city was bombed by Russia on 16 March. More info : When was Mariupol theatre bombed?

How long did Marawi last?

Hundreds, if not thousands, of civilians remained in the besieged city for weeks or months, either as hostages or trapped in the crossfire. The battle lasted for five months, and resulted in the mass displacement of civilians, the widespread destruction of civilian infrastructure, and the loss of civilian lives. More info : How long did Marawi last?

How does Ukraine Ship Sunk?

Where does This War of Mine take place?

This War of Mine is a survival-themed strategy game where the player controls a group of civilian survivors hiding inside a damaged house in the besieged fictional city of Pogoren, Graznavia. More info : Where does This War of Mine take place?