You are here: Home › Trusting Putin on grain corridors would be “kamikaze”, says German minister

Ukraine cannot count on Putin to honour his word and grant safe passage to grain vessels, German agriculture minister Cem Özdemir said during a visit to Kyiv on Friday, where he also promised fresh funds to support alternative export routes. Russia’s blockade of Ukraine’s Black Sea ports has meant that the country is unable to export a majority of its grain stock, contributing to food shortages in import-dependent areas of the world and raising concerns over where the incoming new harvest should be stored. Lately, Moscow has hinted at the possibility of the Kremlin granting safe passage to Ukrainian grain vessels via the Black Sea in exchange for the West easing sanctions. Speaking after a meeting with his Ukrainian counterpart, Mykola Solsky, Özdemir said he shared Ukraine’s scepticism towards Russia’s promises. After visiting Poland on Wednesday and Thursday (June 7-8), the German minister travelled to Kyiv on Friday to discuss aid for Ukraine as well as safe routes for food exports. “As long as Putin is blocking the sea route, we need to use and intensify all available alternatives: roads, rail, and the Danube,” stressed Özdemir, adding Germany would “not back down” on this.

To boost efforts to bring Ukrainian wheat out of the country via the Danube, the minister promised fresh funds to finance expanding laboratory capacities in the Ukrainian city of Izmail, located on the river’s bank near the Romanian border, in order to minimise ships’ turnaround times at the border. A number of European countries have stepped up efforts to reopen maritime corridors for the transport of Ukrainian grain, possibly with the help of a third-party security guarantor, but it remains unclear if Russia would agree to any deal. Meanwhile, the main focus of Özdemir’s meeting with his Polish counterpart, Henryk Kowalczyk, the day before had been on strengthening grain exports by rail. Speaking after the meeting, Kowalczyk said as a country directly bordering Ukraine, Poland had a “special responsibility” to provide help in exporting agricultural goods. Despite these efforts, as well as those of the EU, which recently launched so-called “solidarity lanes” to help strengthen alternative export routes for Ukrainian wheat, logistical as well as bureaucratic hurdles have been impeding grain transport by rail. To help with this, Özdemir said he and Kowalczyk had discussed how the clearance of goods could be simplified, adding this should be “as unbureaucratic as possible.

The German minister, who also visited a crossing at the Polish-Ukrainian border to get an on-side idea about cross-border transport, welcomed Poland’s efforts in this area. Still, any solution other than a reopening of Black Sea trade routes is “a second- or third-best solution,” Özdemir said, stressing that, even if used to a maximum, “rail and road or river transport will not solve this problem. This mirrored a point made by Ukrainian deputy agriculture minister, Markiyan Dmytrasevych, in a recent interview with EURACTIV, where he stressed that, while well-intentioned, efforts to create alternative export routes would never be able to match the capacities of transport via the Black Sea. “The main issue is to help Ukraine become sovereign and independent again and return to world markets,” Özdemir concluded. Despite an adequate and friendly global response, the only option to restore grain exports from Ukraine is to win the war as Russia can not be trusted in any plan aimed at unblocking seaports in the South of the country, Ukraine’s deputy agriculture minister told EURACTIV in an exclusive interview. 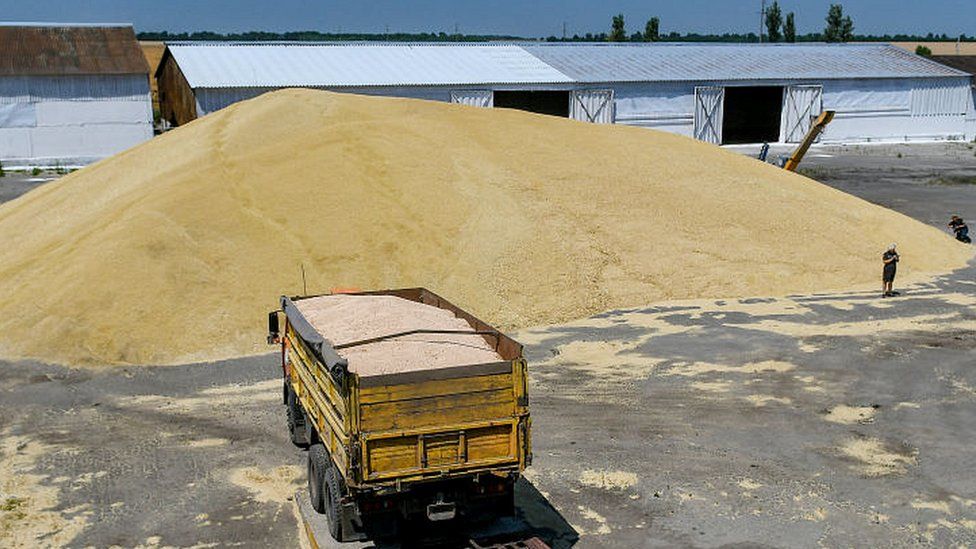 Russia is sending grain from Ukraine overseas, Russian-appointed officials in occupied southern Ukraine say. The claim - which the BBC has not been able to verify - comes as Ukrainian officials accuse Russia of stealing about 600,000 tonnes of its grain and exporting some of it. And Russia says Ukraine must de-mine waters off the Black Sea coast for corridors to export the grain to become operational. He spoke to

Source: Speaker of Ministry of Foreign Affairs Oleh Nikolenko on TwitterQuote from Nikolenko: "Lavrov's words are empty. Russia cannot be allowed to use grain corridors to attack southern Ukraine." Previously: Russian Minister of Foreign Affairs Sergei Lavrov said that Russian and Turkish military personnel are discussing the details of demining Ukrainian ports for the export of grain. Background: Russia mined and blockaded the Black Sea waters, ironically accusing Ukraine [of

The Kremlin said that Western sanctions against Moscow must be lifted before Russian grain could be delivered to international markets. (Reuters)Wednesday, June 8, 2022'Russian aggression', not sanctions, fuel grain crisis - KievUkraine has said that Moscow's aggression was responsible for a global grain crisis, dismissing Russian claims that Western sanctions on Moscow had sent prices soaring. Sanctions must be lifted for Russian grain to reach markets - KremlinThe Kremlin said

On Wednesday, June 8, Turkey hosts talks with Russia seeking to a deal on unblocking grain exports from Ukrainian ports. After Ukrainian President Volodymyr Zelenskyy rejected offers to transport millions of tons Ukrainian grain stuck in the country via Belarus, Russian Foreign Minister Sergei Lavrov has went to Ankara to discuss possibilities of establishing gain export corridors. The grain exports are much needed in the Middle East and Africa, the

German Foreign Minister Annalena Baerbock welcomed her counterparts from Canada, France, Italy, Japan, the UK and US, as well as guest attendees from Moldova and Ukraine. The foreign minister said, "That's why we are discussing how the grain blockade exerted by Russia can be unblocked, how we can get the grain out to the world." "We see a positive, positive dynamic. Blinken is expected to attend a meeting of NATO

Ukraine's Ambassador to Turkiye Vasyl Bodnar on Friday alleged that Russia was stealing Ukrainian grain and sending it abroad including to Turkey. "Russia shamelessly steals Ukrainian grain and sends it overseas from Crimea, including to Turkey," said Ambassador Bodnar. However, Russian invasion of the country has disrupted the export leading many to predict a global food crisis. Russian invasion started on February 24. Also Read | 'Victory will be ours,'

When did Putin come to power as president?

Vladimir Putin was inaugurated president on 7 May 2000. He appointed Minister of Finance Mikhail Kasyanov as his Prime minister. More info : When did Putin come to power as president?

When did Vladimir Putin came to power?

Vladimir Putin was inaugurated president on 7 May 2000. He appointed Minister of Finance Mikhail Kasyanov as his Prime minister. More info : When did Vladimir Putin came to power?

When did Putin first became president?

Vladimir Putin was inaugurated president on 7 May 2000. He appointed Minister of Finance Mikhail Kasyanov as his Prime minister. More info : When did Putin first became president?

When did Putin assume power?

Vladimir Putin was inaugurated president on 7 May 2000. He appointed Minister of Finance Mikhail Kasyanov as his Prime minister. More info : When did Putin assume power?

When was Putin first elected as president?

Vladimir Putin was inaugurated president on 7 May 2000. He appointed Minister of Finance Mikhail Kasyanov as his Prime minister. More info : When was Putin first elected as president?