You are here: Home › 'Disbelief and shock': Manitoba's Ukrainian community to hold rally after Russian invasion

Russia’s invasion of Ukraine has set off a wave of reaction across the globe including in Manitoba where many people have close connections to the country. A rally in support of Ukraine is being held this Saturday at 5 p. Ruslan Zeleniuk runs a Ukrainian export and import shop in Winnipeg. With more than 180,000 Ukrainian Manitobans living in the province, the impact here is wide reaching.

Despite the danger, Winnipegger Yulia Zmerzla, the executive director of the Ukrainian Cultural and Education Centre, said her family wants to stay and defend the country. She said her parents in western Ukraine have stocked up on medications and are ready to volunteer to help the wounded. Yuliia Ivaniuk, coordinator of the University of Manitoba’s Centre for Ukrainian Canadian Studies, said she actually notified her parents and brother in western Ukraine about the invasion because they were sleeping when the attack started. “They’re concerned if Russia’s blitzkrieg is successful in central, eastern and southern Ukraine they will keep on going west,” Ivaniuk said.

Ostap Skrypnyk with the Ukrainian Canadian Congress of Manitoba provincial council said people here are preparing to help any way they can. “Ukraine is going to have lots of internally displaced people, shortages of food and medicine and infrastructure is being destroyed through the war,” Skrypnyk said. Zeleniuk said people have been sending care packages through his store to friends and family in Ukraine but now that the invasion has begun getting those packages to the country could be difficult.

Thousands of people gathered outside the Manitoba Legislature as a show of support for Ukrainians amid the ongoing Russian invasion. Ukrainian flags flew high among the large group of Manitobans who came together Saturday evening in front of the Manitoba Legislative building. Organizers estimate about 5,000 people attended the rally which was hosted by the Ukrainian Canadian Congress Manitoba Provincial Council. "Tonight we are sending Vladimir Putin a message –

Even as an assistant professor in political studies at the University of Manitoba, she struggles to make sense of the Russian siege in Ukraine. Being from a Ukrainian family, Kulick has witnessed that pain among those watching an assault on their country for the second time. Orysia Kulick says everyone is in a state of shock, horror, anxiety and trying to process what is happening in Ukraine. In Winnipeg, as

In 2021, 80,000 refugees were resettled in Canada, with approximately 2,500 of them resettling in Manitoba, according to Immigrate Manitoba. Chaeban says the moniker of Friendly Manitoba is true — Winnipeggers didn't hesitate when he asked for help in bringing his wife's family, who are Syrian refugees, to Winnipeg. When Ali was asked about her reaction to Canada preparing for an influx of refugees from Ukraine, she fought back tears. 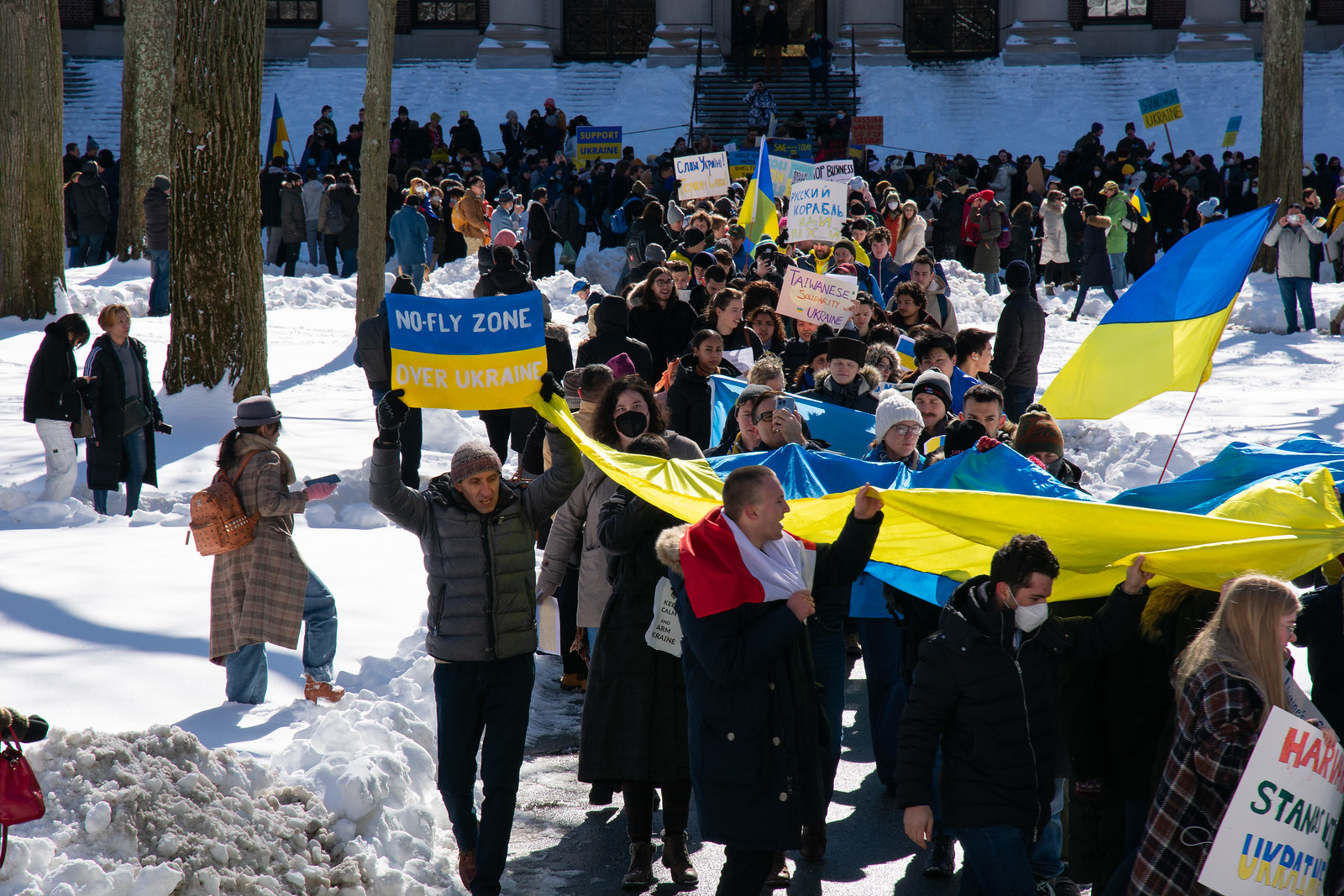 Waving Ukrainian flags and carrying anti-war posters, several hundred demonstrators rallied to support Ukraine in Harvard Yard on Saturday, just days after Russia invaded the country in the region’s largest military escalation in years. Taisa Kulyk ’22, who co-organized the rally, called for Harvard students to show solidarity with the Ukrainian people. We wanted Harvard to do something and Harvard students to unite and have this outlet,” she said. “It

Thousands of people gathered at the Manitoba Legislative Building in another show of support for Ukraine Sunday afternoon. Eight days after the first rally at the Legislature, Ukrainian flags once again filled the front lawn of the building. “They're willing to do it themselves but they need the tools to be able to win, so they're calling on governments to help them and to provide those tools." Anna Shypilova, who

Thousands of people gathered around the Manitoba legislature on Sunday to raise their voices in support of Ukrainians at home and abroad, calling for peace and an end to the Russian invasion. Andrii Shcherbukha immigrated to Manitoba from Ukraine 10 years ago and has participated in a number of rallies since Russia invaded 12 days ago. People gathered at Manitoba's legislature on Sunday afternoon to stand in solidarity with Ukrainians

Ukrainian people living in Ireland have expressed their shock and disbelief at Russia's invasion. The country launched a "full-scale invasion" on Ukraine with air strikes on major cities and troops arriving from the south and east. "And that sent shivers down the spine of people in Ukraine, because they don't know what to expect now". He adds: "My heart is crying, I don't know how to describe - and I

Where are the Ukrainian special forces?

The Bucha massacre was the killing and abuse of Ukrainian civilians by Russian Armed Forces during the fight for and occupation of the Ukrainian city of Bucha amid the Russian invasion of Ukraine. Photographic and video evidence of the massacre emerged on 1 April 2022 after Russian forces withdrew from the city. More info : What happened Bucha?

How many Russian planes have been lost in Ukraine?

This is a list of Ukrainian, Russian and Russian-separatist aircraft losses during the Russo-Ukrainian War, including the War in Donbas and the 2022 Russian invasion of Ukraine.n...nTotal losses.Aircraft lossesAirframeDestroyedMiG-292Su-256Su-241 More info : How many Russian planes have been lost in Ukraine?

How many times has Ukraine been invaded?