You are here: Home › Brits sentenced to death for fighting in Ukraine 'forced to say they're terrorists'

Two Brit fighters who fought on the frontline in Ukraine pleaded guilty to “undergoing training with the aim of carrying out terrorist activities” in a Russian kangaroo court. The supreme court of the Russian-backed Donetsk People's Republic (DPR) has sentenced Aiden Aslin and Shaun Pinner to death on charges of them going to war against Vladimir Putin's army as mercenaries. The Sun reported that the men thought they were legal combatants entitled to be treated as prisoners of war under the Geneva Convention, and said that the men were forced into a false confession. Shaun Pinner, a former waste manager from Watford, Hertfordshire, told the publication on April 25: “We’re scared to death. "I’m not a freedom fighter — Mariupol is my home.

Aiden, a former care worker from Newark, Nottinghamshire, said: “They have agreed to do a prisoner exchange with myself and Shaun. "It is important Boris Johnson is able to help influence this decision. The Sun said it did not report on their calls to their newsdesk at the time as the Foreign Office said it may “impact their safety”. Aslin and Pinner are understood to have admitted to "training in order to carry out terrorist activities" which violates Article 232 of the Criminal Code of the DPR. To stay up to date with all the latest news, make sure you sign up for one of our free newsletters here .

Pinner and Brahim also pleaded guilty to actions aimed at seizing power by force (Article 323 of the Criminal Code of the DPR). The UK Government is “deeply concerned” by the news, with a No 10 spokesperson adding: "We have said continually that prisoners of war shouldn’t be exploited for political purposes. “You will know that under the Geneva Convention prisoners of war are entitled to combatant immunity and they should not be prosecuted for participation in hostilities. “So we will continue to work with the Ukrainian authorities to try and secure the release of any British nationals who were serving in the Ukrainian armed forces and who are being held as prisoners of war.

A statement issued by the Foreign Office on behalf of the family of Shaun Pinner told of their devastation and sadness of the outcome of the "illegal show trial"Family of Brit sentenced to death for fighting Russia break silence on 'show trial'The family of a British man condemned to death for fighting Russian forces say they are "devastated". Prime Minister Boris Johnson has ordered ministers to do "everything in their

"The French president told President Zelensky that France was ready to meet Ukraine's needs, including with regard to heavy weapons," the statement said. The French leader also discussed with the Ukrainian president the latest developments on the battlefield, the need for military equipment, political and financial support, as well as the provision of humanitarian aid. Macron has promised to "keep in touch" with Zelensky on granting Ukraine candidate status. The

Two Brits and a Moroccan national captured while fighting for Ukraine have been sentenced to death by a court in Russian-controlled eastern Ukraine. Widely considered a show trial by the West, the Russian media covered the fighters’ court case with earnest gravity. Although only Saadoun speaks in the recording, the video demonstrates the degree to which the Russian media have turned the trial into a macabre spectacle. A typical example

Black smoke rises from Severodonetsk during battle between Russian and Ukrainian troops (AFP or licensors)The families of two Britons sentenced to death for fighting Russian forces in Ukraine have said they need urgent access to medical and legal help. The appeal came amid mounting concern about the plight of the two Britons and a Moroccan national held in Eastern Ukraine by pro-Russian separatists as clashes escalating in the area. By

Russian Sentenced to Life in Ukraine’s 1st ‘War Crimes’ TrialA Ukrainian court sentenced a 21-year-old Russian soldier, Sgt. Ukrainian President Volodymyr Zelenskyy called for “maximum” sanctions against Russia on Monday at the World Economic Forum in Davos, Switzerland. On the battlefield, Russian forces have stepped up shelling in Ukraine’s eastern industrial heartland as they press their offensive in the region that is now the focus of fighting. Grinding battles in 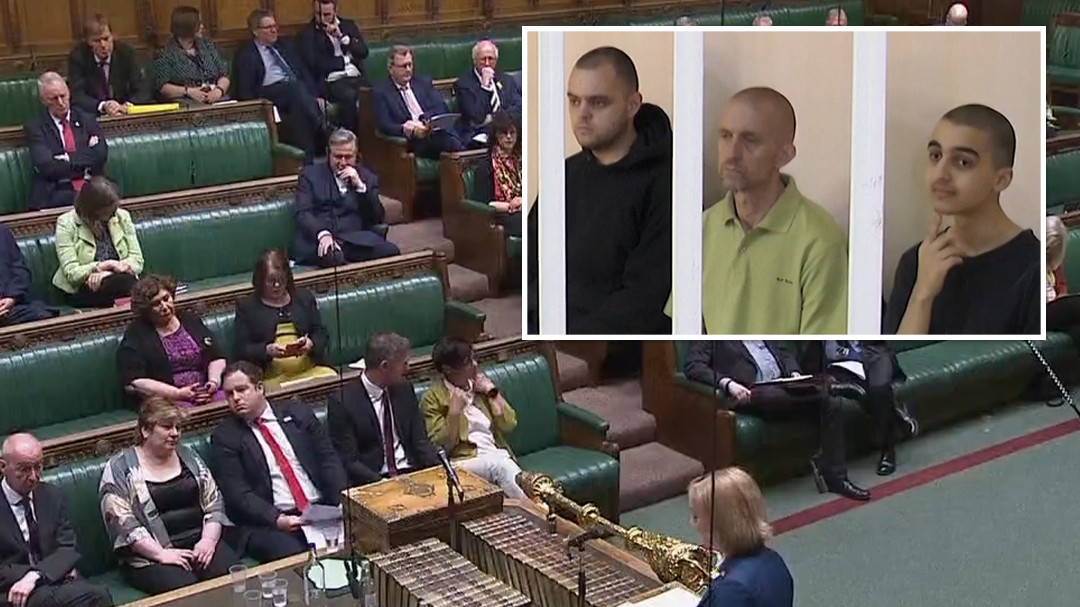 Two British citizens and a Moroccan man have been sentenced to death by a court in the separatist-controlled Donetsk People's Republic in eastern Ukraine for fighting against Russia in the ongoing war. A spokesperson for the Ukrainian Foreign Ministry said on Thursday that the death sentences should be considered null and void. He stressed that all foreign citizens fighting as part of Ukraine’s armed forces should be considered Ukrainian military

Two British citizens and a Moroccan have been sentenced to death by pro-Moscow rebels in eastern Ukraine for fighting on Ukraine's side. Pinner's family also explained that he was "neither a volunteer nor a mercenary, but officially serves in the Ukrainian army in accordance with Ukrainian legislation". 'Sham judgment'The United Kingdom said on Thursday it was "gravely concerned" after the announcement of the death sentence of two British fighters by

Three fighters who were captured while fighting for Ukraine and sentenced to death are being used as ‘hostages’ by Russia to put pressure on the West over peace negotiations, a senior Ukrainian official said on Friday. They are using them as hostages to put pressure on the world over the negotiation process," he told national television. They were brought to trial after a Ukrainian court sentenced a Russian soldier to

Who was convicted of war crimes in ww2?

Galileo was once again summoned to Rome. In 1633, following a trial, he was found guilty of suspected heresy, forced to recant his views and sentenced to house arrest until his death in 1642. It took nearly 200 years after Galileo's death for the Catholic Church to drop its opposition to heliocentrism. More info : What happened Galileo's death?

Who dies in Glass Sword?

What Happened in Glass Sword? Execution: Mare and Cal are sentenced to death by Maven, who ascended to the throne after he and his mother, Queen Elara, forced Cal to kill his father, King Tiberias. More info : Who dies in Glass Sword?

When was the death penalty reinstated in Mississippi?

In 1984, the Mississippi legislature amended the state's death penalty statute to provide for lethal injection for all individuals sentenced to death after the law went into effect. Inmates sentenced prior to the change were still executed by lethal gas. More info : When was the death penalty reinstated in Mississippi?

What does Wakanda mean?

They did not know where He was, nor did they undertake to say how He existed … Wakanda means 'the mysterious' …” How the Oscar-winning 'Coco' and its fantastical afterlife forced us to talk about death. Wakanda also was something more. More info : What does Wakanda mean?