You are here: Home › France ready to help on Ukraine’s grain stocks crisis

PARIS: France is unwilling to make concessions to Russia and wants Ukraine to win the war against Moscow’s invading forces with its territorial integrity restored, a French presidential official said on Friday, as Paris seeks to assuage concerns over its stance in the conflict. President Emmanuel Macron has been criticised by Ukraine and eastern European allies after published interviews on Saturday quoting him as saying it was vital not to “humiliate” Russia so that when the fighting ends there could be a diplomatic solution. Macron has spoken with Russian President Vladimir Putin regularly since the Feb.

“There is no spirit of concession towards Putin of Russia in what the president says. France is also ready to help on allowing access to the port of Odesa, where some of Ukraine’s grain stocks are ready to be exported, the official said. “We’re at the disposal of the parties so that an operation can be set up which would allow access to the port of Odesa in complete safety,” the official said. The official didn’t elaborate on what that help would be.

The Black Sea, where Odesa is located, is crucial for shipment of grain, oil and oil products. Ukrainian government officials estimate 20 million tonnes of grain are unable to travel from what was the world’s fourth largest exporter before Russia’s invasion. Defending Macron’s position, the official said there would have to be a negotiated solution to the war.

Ukraine is not ready to consider the option of grain exports through Belarus. We are not ready to work in this format and help our ‘friendly’ neighbors," President Volodymyr Zelensky told journalists on June 6. As reported, Russian President Putin called a "bluff" the message that Russia hinders the grain exports from Ukraine, provoking a food crisis, and pointed out possible export options. According to the Ministry of Agrarian Policy

Germany is working to transport by rail millions of tons of grain, currently blocked in Ukraine’s sea ports by the Russia military, a top US defense official said Thursday. The flow of grain exports from Ukraine, known as Europe’s bread basket, has been disrupted since Russia’s February 24 invasion, threatening food security around the world. Meanwhile, Romania has made its Black Sea port of Constanta available for Ukraine’s grain, which 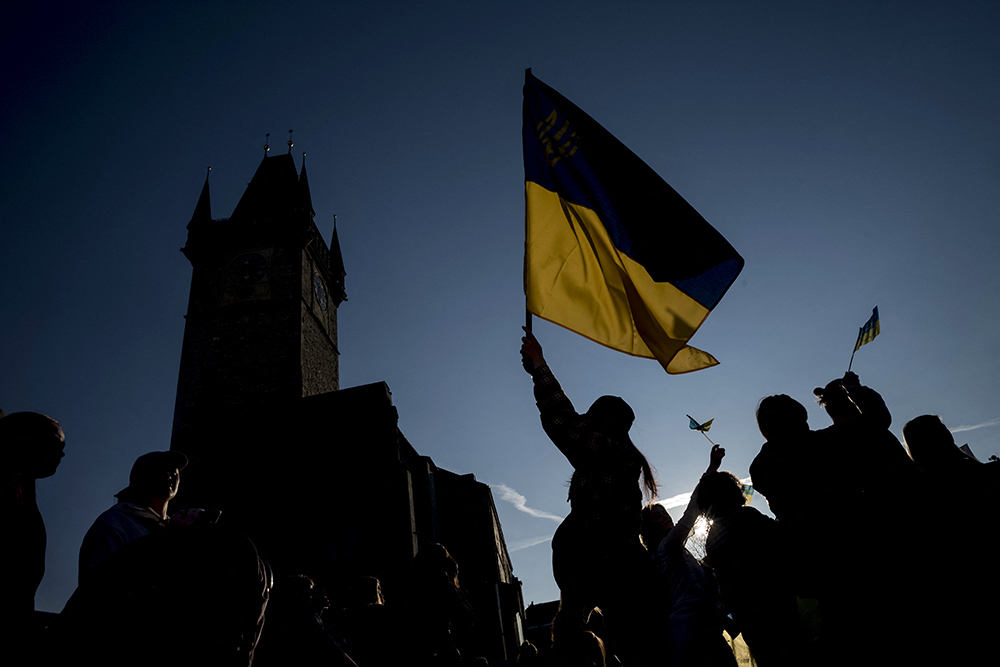 Ukraine tried to push back Russian troops in the east and south on Friday as France offered to help ensure access to the port of Odessa and ease a global grain crisis. Local governor Sergiy Gaiday said on Friday that Russian forces had destroyed a major sports centre, adding: "One of the symbols of Severodonetsk was destroyed. France wants "victory for Ukraine", the advisor added, after Macron sparked controversy by

Boris Johnson yesterday held talks with Ukrainian president Volodymyr Zelensky on moving grain out of Ukraine amid warnings some countries could face famine. The Prime Minister raised ‘significant concerns’ with Mr Zelensky as he tried to open up ‘critical sea and land supply’ routes. Ukraine was seen as Europe’s ‘bread basket’ before Russia invaded and many poor nations rely on its grain. United Nations secretary general Antonio Guterres warned of

Russia’s invasion of Ukraine in February halted Kyiv’s Black Sea grain exports, threatening a global food crisis. Why do Ukrainian grain exports matter? Lavrov said it was up to Kyiv to solve the problem of freeing up its grain exports by clearing its ports of mines. He said it could take at least two-to-three months to remove mines from Ukrainian ports, and that the Turkish and Romanian navies should be

What is Army SOS Ukraine?

How do I donate to Ukraine from Canada?

More info : How do I donate to Ukraine from Canada?

Where can I donate to Ukraine from Canada?

What is the best way to donate to Ukraine from Canada?

More info : What is the best way to donate to Ukraine from Canada?

How can I donate to Canada from Ukraine?

More info : How can I donate to Canada from Ukraine?