You are here: Home › Russia preparing for second Africa Summit to build closer ties as it pivots away from the West

Russia is preparing for the second Russia-Africa summit, scheduled for October-November 2022 in Addis Ababa, Ethiopia, as it steps up its campaign to move closer to the African countries and pivot away from the West due to the latter's extreme sanctions imposed after the start of the war in Ukraine. Russia was already heavily invested in Africa as part of President Vladimir Putin’s policy of fostering ties with the non-aligned nations of the developing world ever since relations with the West soured following Russia’s annexation of Crimea in 2014. But the need to develop deep trade and investment ties in Africa has been given a new urgency since the West has broken off almost all business ties with Russia this year. Better relations with Africa are commercially important as Russia starts searching for new customers to buy its energy, grain and other commodities. The details of the summit will be decided in talks between the African Union, Russian Federation Council Speaker Valentina Matviyenko said at a meeting with the Speaker of Mozambique’s Assembly (parliament), Esperanca Bias, during an official visit to Maputo from May 30 to June 1. "Russia has always provided assistance to Mozambique and it keeps doing so. Russia has deep business ties with Mozambique, but as bne IntelliNews has reported, the business relations do not always run smoothly. The Russia-Africa Summit has been an important platform for promoting Russian interests on the continent and leaders from 48 of Africa’s 54 countries attended the first summit held in the Russian resort city of Sochi in October 2019. The event was supposed to be held annually, but was delayed following the outbreak of the coronavirus (COVID-19) pandemic in 2020. This year’s summit will be even more important as Russia looks for new markets and to expand existing ones after the West imposed extreme sanction on Russia following its invasion of Ukraine at the end of February.

For its part Africa is keen to keep relations civil, as many countries on the continent depend on Russian grain imports. Sall has also highlighted that the decision to expel Russian banks from the SWIFT financial messaging system could hurt food supplies to the continent, RFI reported. African nations have been among Russia’s most loyal supporters since the conflict in Ukraine started. Matviyenko’s trip to Mozambique was part of preparing the ground for this year’s summit. A co-ordination council has been established under the aegis of the Secretariat of the Russia-Africa Partnership Forum (RAPF). Moscow is poised to build relations of strategic partnership with pan-African organisations and regional integration associations, Lavrov added. Lavrov said that the two most important goals of the summit will be to sign off on a “memorandum of understanding between the government of the Russian Federation and the African Union on basic principles of relations and co-operation” and a “memorandum of understanding between the Eurasian Economic Commission and the African Union on economic co-operation. The Eurasian Economic Commission is the executive body of the Eurasia Economic Union (EEU), Russia’s answer to the European Union. Russia hopes to extend the reach of the EEU down into Africa by co-ordinating with the AU more closely. Progress on building up a North-South free trade area between the EEU and AU has already taken its first concrete step forward after the African Continental Free Trade Agreement (AfCFTA) came into effect on January 1 this year.

AfCFTA reduces to zero 95% of all previous intra-Africa tariffs that were imposed on cross-border trade. The free trade regime in Africa will also allow Special Economic Zones (SEZ) to import machinery and parts to make African products such as machinery. With almost all high-tech machinery exports to Russia now banned, using Africa as a production base, which is free to import machinery from Europe, may become a way for Russia to avoid sanctions and buy badly needed equipment it can no longer source from Europe. The importance of the upcoming summit has been bolstered by the booming trade between Russia and Africa, which has soared this year. Afreximbank president Benedict Oramah said in a recent interview with Tass that trade between African countries and Russia has seen considerable progress. “Just six years ago there were exports of some $8bn from Russia and imports to Russia from Africa of $2bn or less. Russia is in the process of establishing a $5bn ecommerce trade portal with African countries, has been targeting Nigeria as a growth market and has a naval base at Port Sudan. The EEU will sign off an agricultural trade deal with the AU, and Egypt is expected to sign off an EEU Free Trade Agreement at the summit. Russia is heavily involved in the African oil and gas industry, but has also been investing in infrastructure, with Russia providing railway equipment to Egypt and developing manufacturing facilities on a continental basis. This story is part of the business new Africa (bna IntelliNews) coverage that launched in September.

German chancellor Olaf Scholz warned on Thursday (9 June) that the world is heading towards a multipolar world order that could diminish international solidarity and lead to renewed block building and deglobalisation. As the world is currently facing multiple crises simultaneously, this process could be unbundled, warned Scholz. No one can disconnect from the rest of the world,” Scholz stressed in a speech at re:publica festival on Thursday. Scholz travels

Africa-Russia relationsFile photo of the Africa-Russia summit in Sochi in 2019, with Russian President Vladimir Putin surrounded by his African counterparts. “You’ll recall that South Africa abstained the last time, too, in 2014, when Russia annexed Crimea,” says Adeoye, adding that it also supports Russia as one of the BRICS (Brazil, Russia, India, China, South Africa) emerging countries group," says Adeoye. “If South Africa felt so strongly about the failures

German chancellor Olaf Scholz travelled to Africa on Sunday (22 May) in an attempt to forge closer ties with like-minded democracies in an increasingly multipolar world order currently being reshaped by Russia’s war in Ukraine. Germany and the EU were already seeking closer ties with Africa prior to the war in Ukraine. Rapprochement with “like-minded” democracies? Both, India and South Africa have refrained from publicly condemning the Russian war of

"We're on the side of peace," Modi was quoted as saying by the Press Trust of India. Long-term strategyHowever, it has to be the United Kingdom's long-term strategy to get India closer to the West and further away from Russia. India has called for a cease-fire in Ukraine, but has abstained from resolutions condemning Russia despite constant pressure from the United States and its Western allies. India has long-standing defense

Liz Truss will appeal to India to side with the West in the Ukraine war as she visits New Delhi at the same time as Russia’s foreign minister. The Foreign Secretary is not planning to meet her Russian counterpart Sergei Lavrov, who is seeking to persuade India’s Government to build closer ties with the Kremlin. The country has refused to back either Russia or Ukraine since the invasion started a 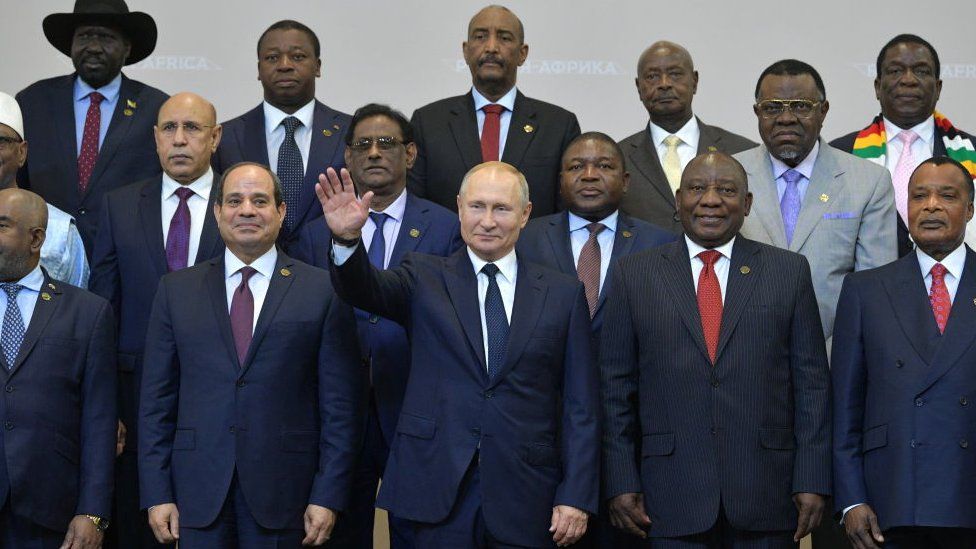 And on Wednesday the deputy leader of the Sudanese junta, Mohamed Hamdan Dagalo, led a delegation to Moscow in a sign of closer ties between the two countries. Mali's Prime Minister Choguel Maiga confirmed, in an interview with France24, that his country has signed military cooperation agreements with Russia. But he denied that the controversial Russian private military company, the Wagner Group, was involved. As Mr Putin indicated, there are

Diplomats from Russia and Ukraine have met for talks for the first time since the start of the invasion. He said delegates clarified several key areas of discussion, and outlined some decisions about them. Vladomir Medinsky, the head of the Russian delegation, said the two sides met for five hours of talks. At the same time, Ukrainian leaders are seeking closer ties to the West. However, leaders in Moscow have

Only a combination of Ukrainian resistance and intense international pressure will change his cost-benefit calculation away from fighting and towards negotiations. These instruments are upheld in the first and second UN resolutions on Ukraine, which South Africa declined to endorse. South Africa seen as biasedWhile international mediators cannot be neutral, they must endeavour to be impartial. Yet Turkey, unlike South Africa, has not refrained from voting to support the UN

The first vehicle bridge between Russia and China opened to freight traffic Friday as Moscow pivots to Beijing amid the crisis in relations with the West over its invasion of Ukraine. The Blagoveshchensk-Heihe bridge across the Amur River was completed in late 2019 after three years of construction and two more years of coronavirus-related inactivityTransportation between the border cities with close economic ties was to date provided by riverboat, hovercraft,

News analysisRussia's state-owned nuclear company Rosatom doesn't think "politics" – around things such as the invasion of Ukraine – should influence nuclear relations. Rosatom still hopes to build nuclear reactors in South Africa, after being promised contracts eight years ago. In 2014, South Africa agreed that Russia’s state-owned Rosatom would build up to eight nuclear reactors in SA, to supply up to 9.6GW of power. "Rosatom believes that relations in

What did Wladimir Klitschko say he would use to protect freedom?

Asked about the dangers behind President Volodymyr Zelenskyy's initiative to arm all civilians who want to defend the homeland, Klitschko said the Ukrainians had the right to defend themselves, their freedom and their choice to orient their country away from Russia and in favour of closer ties to NATO and the West.Feb 24, 2022 More info : What did Wladimir Klitschko say he would use to protect freedom?

Background: After seven decades as a constituent republic of the USSR, Belarus attained its independence in 1991. It has maintained closer political and economic ties to Russia than any of the other former Soviet republics. More info : Which country owns Belarus?

Where is the Morozov collection going after Paris?

Despite Calls for Seizure, the Blockbuster Morozov Collection Is Heading Home to Russia From the Fondation Louis Vuitton. The show was part of an effort by Vladimir Putin and Emmanuel Macron to promote closer cultural ties. More info : Where is the Morozov collection going after Paris?

Can you drive from South Africa to Russia?

How far is Aylesbury from the sea?

Aylesbury is a couple of miles closer to Bell Wharf Beach being 65.71 miles away. High Wycombe is slightly closer to the seaside being 58.22 miles away from Littlehampton Coastguards Beach in Arun, West Sussex. More info : How far is Aylesbury from the sea?