KYIV, Ukraine—Ukrainian and British officials warned Saturday that Russian forces are relying on weapons able to cause mass casualties as they try to make headway in capturing eastern Ukraine and fierce, prolonged fighting depletes resources on both sides. Russian bombers have likely been launching heavy 1960s-era anti-ship missiles in Ukraine, the U. Both sides have expended large amounts of weaponry in what has become a grinding war of attrition for the eastern region of coalmines and factories known as the Donbas, placing huge strains on their resources and stockpiles. As Russia also sought to consolidate its hold over territory seized so far in the 108-day war, the US defense secretary said Moscow’s invasion of Ukraine “is what happens when oppressors trample the rules that protect us all. “It’s what happens when big powers decide that their imperial appetites matter more than the rights of their peaceful neighbors,” Lloyd Austin said during a visit to Asia. A Ukrainian governor accused Russia of using incendiary weapons in a village in the eastern province of Luhansk, southwest of the fiercely contested cities of Sievierodonetsk and Lysychansk. While the use of flamethrowers on the battlefield is legal, Luhansk Gov. “At night, the enemy used a flamethrower rocket system—many houses burnt down,” Haidai wrote on Telegram on Saturday. Sievierodonetsk and neighboring Lysychansk are the last major areas of Luhansk remaining under Ukrainian control. The Ukrainian army said Saturday that Russian forces also were to launch an offensive on the city of Sloviansk in Donetsk province, which together with Luhansk makes up the Donbas, During a visit to Kyiv by the European Union’s top official, Ukrainian President Volodymyr Zelenskyy called for a new round of “even stronger” EU sanctions against Russia. Zelenskyy called for them to target more Russian officials, including judges, and to hamper the activities of all Russian banks, including that of gas giant Gazprom, as well as all Russian companies helping Moscow “in any way. He spoke during a brief appearance with European Commission President Ursula von der Leyen at the heavily guarded presidential office compound in Ukraine’s capital. “Russia wants to divide Europe, wants to weaken Europe,” he said. Von der Leyen said the EU’s executive arm was “working day and night” on an assessment of Ukraine’s eligibility as a candidate.

Von der Leyen described the membership process as “a merit-based path” and appealed for Ukraine to strengthen its rule of law, fight corruption and modernize its institutions. Zelenskyy said later, in his nightly video address, that fierce street battles were continuing in Sievierodonetsk and he was proud of the Ukrainian defenders who for weeks have held back the Russian advance. “Remember how in Russia, in the beginning of May, they hoped to seize all of the Donbas?” the president said. Zelenskyy said Russian forces are being pushed out of parts of the Kherson region they occupied early in the war. He added that no one knows how long the war will last, but Ukraine should do everything it can so the Russians “regret everything that they have done and that they answer for every killing and every strike on our beautiful state. Hundreds of Ukrainian troops remained blockaded inside a chemical plant on the outskirts of Sievierodonetsk, but some of the civilians with them have started to come out, an envoy for Russian-backed separatists said Saturday. Several hundred civilians could still be inside the Azot plant, where they sought safety from the shelling in underground shelters, Rodion Miroshnik said via Telegram. As the circle around the Ukrainian troops tightens, he said, the civilians will be able to leave and Russian forces “are preparing transportation for their evacuation. In the western Ternopil province, which has largely been spared from the fighting, an explosion rocked the town of Chortkiv late Friday, the governor said. There was no immediate information about the cause of the explosion, and Gov. He said local officials decided to turn off supplies of natural gas while dealing with the consequences of the explosion. Russian-installed officials in Ukraine’s southern Zaporizhzhia region have set up a company to buy up local grain and resell it on Moscow’s behalf, a local representative told the Interfax news agency on Saturday. Yevgeny Balitsky, the head of Zaporizhzhia’s pro-Russian provisional administration, said the new state-owned grain company has taken control of several facilities. He said “the grain will be Russian” and “we don’t care who the buyer will be. It was not clear if the farmers whose grain was being sold by Russia were getting paid.

Ukraine and the West have accused Russia of stealing Ukraine’s grain and causing a global food crisis that could cause millions of deaths from hunger. The head of Ukraine’s presidential office accused Russia’s military of shelling and burning grain fields ahead of the harvest. “Our soldiers are putting out the fires, but (Russia’s) ‘food terrorism’ must be stopped,” Yermak wrote Saturday on Telegram. Russian forces occupying parts of southern Ukraine began handing out Russian passports to local residents Saturday. In the Kherson region, 23 residents accepted the documents, including the new Moscow-installed governor, Russian state news agency RIA Novosti reported. Soldiers also started giving out passports in the occupied city of Melitopol, according to Russian state news agency Tass, which cited a Russian-installed local official as the source of the information. Melitopol is located outside of the Donbas in the Zaporizhzhia region. Nearly 800 children have been killed or wounded in Ukraine since the beginning of Russia’s invasion, Ukrainian authorities said Saturday. According to a statement by the Office of the Prosecutor General of Ukraine, at least 287 died as a result of military activity, while at least 492 more have been hurt. The office said children in Donetsk province have suffered the most, with 217 reported killed or wounded, compared with 132 and 116, respectively, in the Kharkiv and Kyiv regions. Officials in the city of Odesa said Saturday that a man was killed by an explosion while visiting a beach on the Black Sea, where mines are a growing concern. The city council said via Telegram that the man was there with his wife and son despite warnings to stay away from beaches. Russia and Ukraine each have accused the other of laying mines in the Black  Sea.

With a little more Western assistance, Ukraine will defeat Russia. Russia’s attack was unjustified and criminal, causing needless death and destruction in Ukraine, and sacrificing Russian lives for no good reason. That these weapons have to be relocated over thousands of kilometers through Ukraine to east Ukraine. Using Ukraine to fight a proxy war against Moscow risks Russian retaliation, especially when allied support is deadly and overt, even ostentatious. People

More infoTrostianets mayor Yuriy Bova said officials had discovered traces of the deadly substance sarin and other chemical substances. Mr Bova said in comments published by the National News Agency of Ukraine: "We found the remains of chemical weapons in the village of Bilka—sarin and other substances. The comments come just days after Ukraine accused the Russian military of using chemical weapons against troops in the under-fire and besieged city

Pope Francis waves to the crowds that gathered in St.Peter's Square at the Vatican as he recites the Regina Coeli noon prayer from the window of his studio, April 24, 2022. Andrew Medichini | APPope Francis appears to be at least partially blaming the West for the war in Ukraine. He castigated the weapons manufacturers for using the war in Ukraine to test ever more dangerous and deadly weapons. Kirill

Ukraine War: The UK minister warned Putin could deploy more deadly weapons. (File)The Russia-Ukraine conflict could last a "number of years" and the world needs to be prepared for Moscow "to seek to use even worse weapons", British Foreign Secretary Liz Truss warned Sunday. "I fear this will be a long haul, this could be a number of years," Truss told Sky News. The minister said that intelligence showed that

Dominic Sandbrook, an expert in modern history, wrote in the Daily Mail: "Nuclear weapons are weapons of weakness. It said: "A tactical nuclear weapon would produce a fireball, shock waves, and deadly radiation that would cause long-term health damage in survivors. "No one knows if using a tactical nuclear weapon would trigger a full-scale nuclear war. Russian war reporter and Kremlin "propagandist" Alexander Sladkov claimed the Russian President will soon

Russian forces may use chemical weapons in Ukraine and it’s up to our world's leaders and countries like New Zealand to try and deter them from it. (Source: Associated Press)That's the message from a world authority on chemical weapons. “What Putin is trying to do in Ukraine is terrify the civilian populations into surrender, and sadly chemical weapons are really good at doing that." Russia has already demonstrated the capacity

Ukraine: NATO chemical weapons response discussed by WeberSUBSCRIBE Invalid email Sign up for our news briefing, including a daily special Russia-Ukraine edition We use your sign-up to provide content in ways you've consented to and to improve our understanding of you. More infoExperts in the US have sounded the alarm bells over the possibility of Putin using chemical weapons in Ukraine. Retired US Army General Barry McCaffrey tweeted: “If the 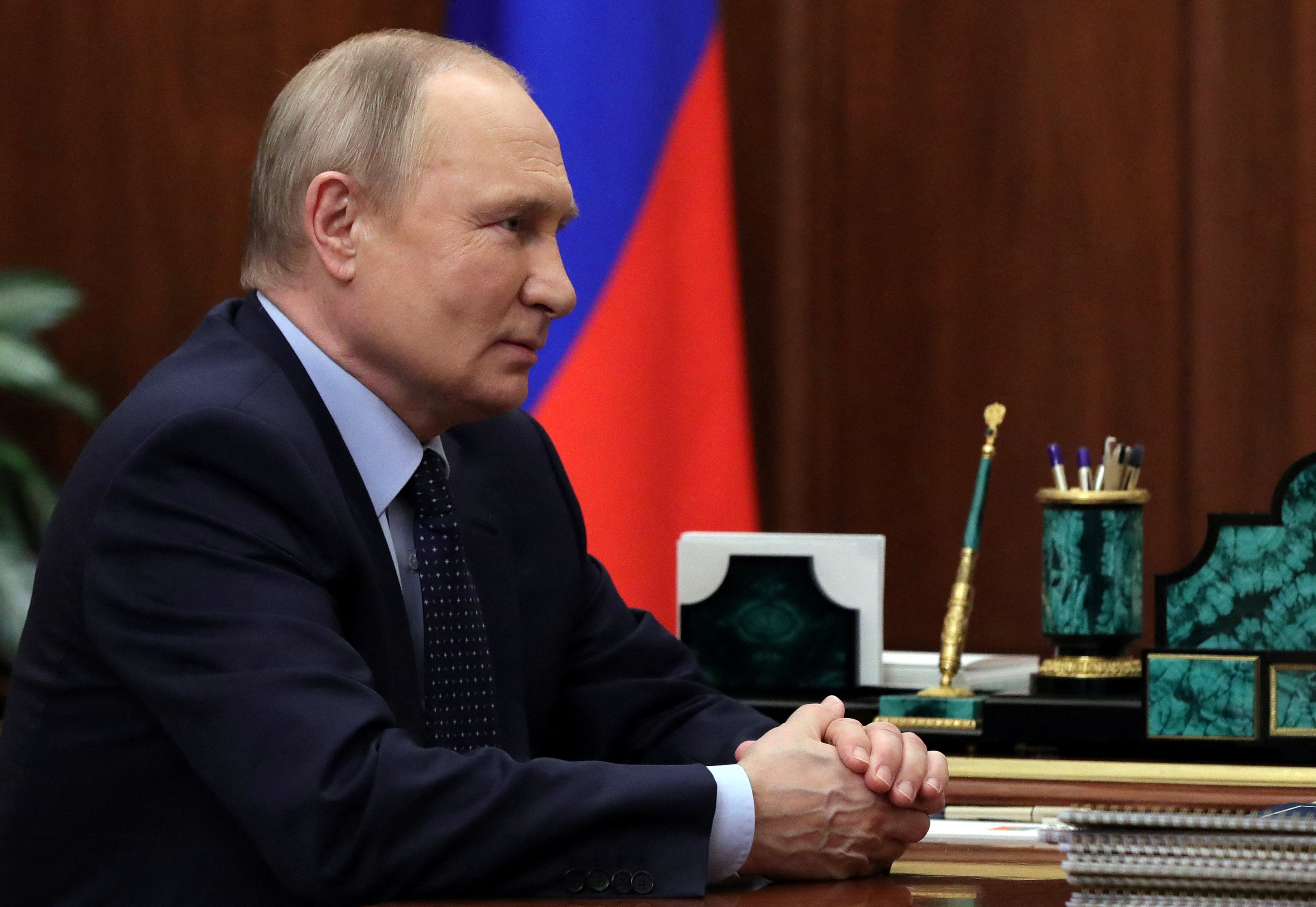 Russia is supposedly using its invasion of Ukraine to try new technology on the battlefield. As Reuters reports, the Russian government says it's using a new wave of laser weapons to counter the Western technology aiding Ukraine's self-defense. Deputy prime minister Yury Borisov claimed Russia was using prototypes for a drone-destroying laser weapon, Zadira, that can burn up drones. The deputy leader maintained that new lasers using wide electromagnetic bands

How many tanks and planes has Russia lost?

Ukraine's armed forces say Russia has lost more than 680 tanks. Meanwhile, Oryx - a military and intelligence blog which counts Russia's military losses in Ukraine on the basis of photographs sent from the war zone - says Russia has lost more than 460 tanks and over 2,000 other armoured vehicles. More info : How many tanks and planes has Russia lost?

What are Russia's military losses in Ukraine?

How many Russian vehicles have been lost?

Ukraine's armed forces say Russia has lost more than 680 tanks. Meanwhile, Oryx - a military and intelligence blog which counts Russia's military losses in Ukraine on the basis of photographs sent from the war zone - says Russia has lost more than 460 tanks and over 2,000 other armoured vehicles. More info : How many Russian vehicles have been lost?

How many armoured vehicles have Russia lost in Ukraine?