You are here: Home › Trump and other top conservatives rally to Putin's side as he threatens Ukraine

Trump and top conservatives have showered Putin with praise during a Ukraine crisis he's triggered. The GOP is split over Putin's aggression and what to do about it. But the party is largely unified behind one idea — that Biden is to blame for the crisis. Former President Donald Trump and many leading conservative figures have been praising Russian President Vladimir Putin as he threatens Ukraine with war. While it's not unusual for former presidents to disagree with their successors on policy, it is unorthodox for them to shower a US adversary like Putin with flattery — particularly given the Russian leader is poised to launch a major military offensive on a US ally. But this hasn't stopped Trump and some of his close allies from expressing admiration for Putin, including over the Russian president's misleading justifications to use force against Ukraine. In an appearance on the "Clay Travis and Buck Sexton Show," Trump said Putin's justification for invading Ukraine was "savvy" and "genius.

"I went in yesterday, and there was a television screen, and I said, 'This is genius. The former president has also ripped into Biden's approach to the situation, suggesting that the sanctions he imposed were "weak" while claiming that the crisis never would have happened if he were in office. Trump has conveniently left out that his first impeachment was, in part, due to the fact he withheld roughly $400 million in military aid to Ukraine while pressuring it to launch an investigation into Biden and his son Hunter over bogus allegations of corruption. Trump's former secretary of state, Mike Pompeo, has also routinely praised Putin in recent weeks — even as Russia has gathered tens of thousands of troops on Ukraine's border. In an interview with the Center for the National Interest last week, Pompeo described Putin as "very shrewd" and "very capable. Pompeo also expressed "enormous respect" for Putin, an authoritarian who has ruled over Russia for 20 years. But Trump, Pompeo, and other conservatives like them apparently don't find these trends especially problematic.

Fox News' Tucker Carlson, the most-watched cable-news host and perhaps the most influential voice on the right beyond Trump, has repeatedly defended Putin on his show in recent months. "It may be worth asking yourself, since it is getting pretty serious, what is this really about? Why do I hate Putin so much?" Carlson said on his show on Tuesday night. Carlson has echoed Putin's propaganda on Ukraine, characterizing it as a puppet of the US while bashing NATO. But the GOP has also splintered in many directions over Ukraine, which is perhaps a byproduct of the ways in which Trump has challenged the party's traditional stances on an array of issues — especially foreign policy. A decade ago, it would've been unthinkable to see Republicans questioning support for NATO. "Europe is on the verge of war because of the weakness, the fecklessness of Joe Biden," Cruz recently told Fox News. Indeed, beyond outliers like Kinzinger, the GOP's only consistent position on the Ukraine crisis so far has been to blame Biden. 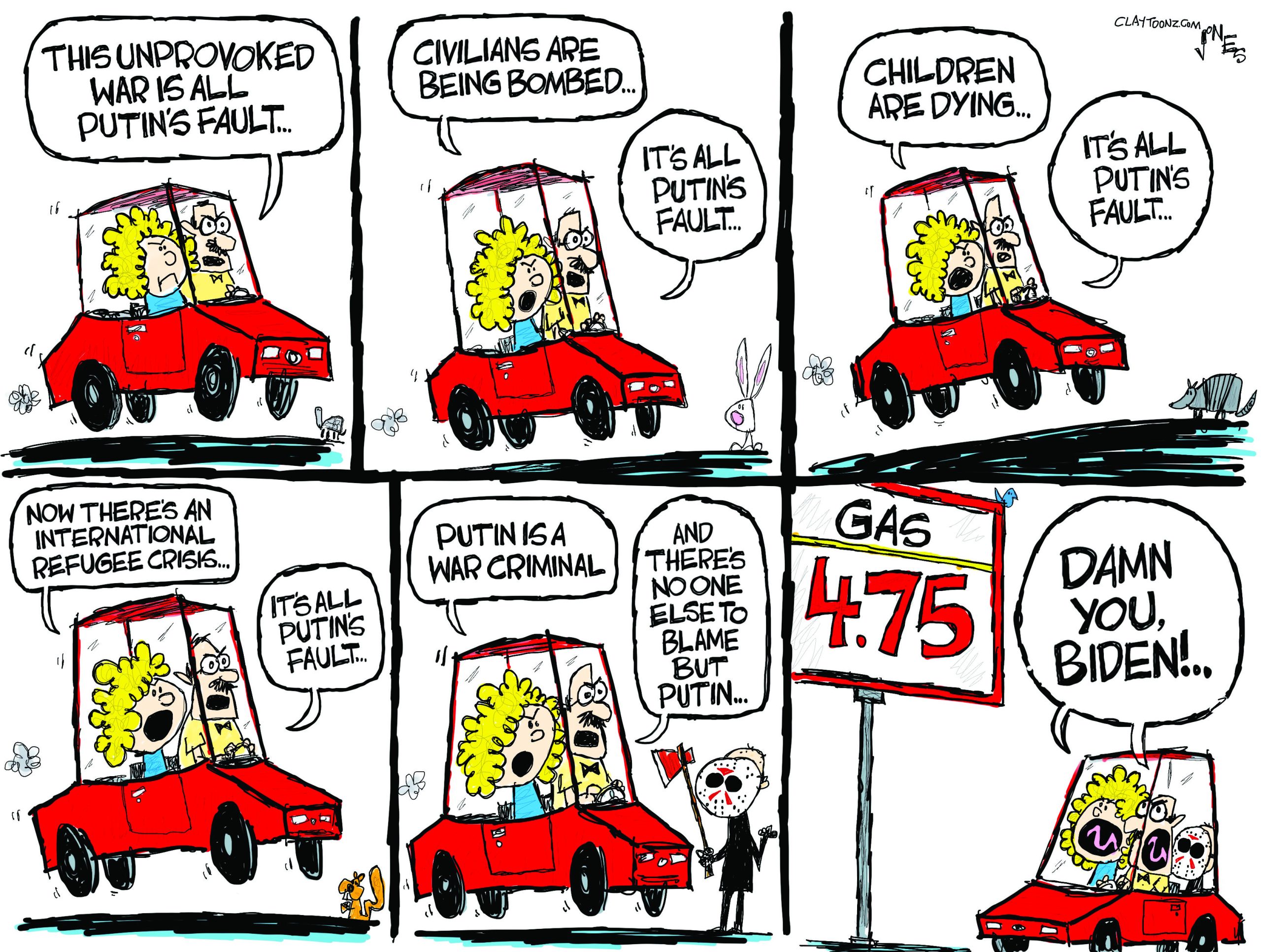 Yet, conservatives keep trying to latch on to a way to blame President Biden, and they keep coming up empty. Trump defended Putin when Bill O’Reilly called him a “murderer.” Trump defended Putin when our government says he meddled in our election. While standing next to Putin, Trump took his side over American intelligence’s accusation that Putin tampered with our election. Sure, and right after that, you’d blame President Biden

Donald Trump has long been an admirer of Russian President Vladimir Putin. This is a problem for those Conservatives who stood with the horn-honking truckers and their supporters in opposing pandemic measures. The Russian invasion of Ukraine would be deeply embarrassing for Mr. Trump, if he were capable of embarrassment. Shameless as ever, Mr. Trump pivoted on Saturday night in a speech at the Conservative Political Action Conference. (We’re assuming

At a campaign rally in Georgia over the weekend, the former President, again, praised Russian President Vladimir Putin"The smartest one gets to the top," Trump told the crowd. But they ask me, 'Is Putin smart?' Yes, Putin was smart. Trump added that Putin made a "big mistake," but that "it looked like a great negotiation." That all sounds a lot like what Trump has been saying about Putin almost since 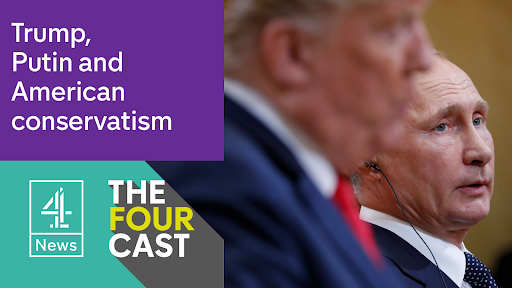 Are American conservatives more concerned with enemies at home than those abroad? Former President Donald Trump, the keynote speaker at the event, described Ukraine’s President Zelenskyy as brave, but repeated his admiration of Vladimir Putin, describing him as a smart, strong leader. In today’s podcast, we look at where American conservatives stand on Russia and Putin, why some seem to admire the man who invaded Ukraine, and whether they are

Trump said China's Xi was smart because he "runs 1.5 billion people with an iron fist," while he called North Korea's Kim "tough." Yes, Putin was smart," Trump told a crowd of rally-goers. After acknowledging that Putin had made a "big mistake" in attacking another country and its people, Trump said the Russian leader's massive buildup on the border ahead of the invasion appeared to be a "great negotiation." Trump

WASHINGTON: Whether Russian leader Vladimir Putin breaks Ukraine or not, he has certainly caused fissures in the Republican Party in the US.The establishment wing of the GOP on Friday joined Democrats in condemning the Russian invasion of Ukraine, leaving party supremo Donald Trump isolated in his praise of Putin. In remarks on radio and to party donors this week, Trump called Putin "smart" "savvy" and a "genius" for his invasion

Some guest speakers -- from Republican senators to senior Trump administration officials -- accused Putin of tormenting Ukraine, forcing its people to flee their homes and splitting families apart. Unlike his top diplomat, former President Donald Trump seemed to side with Putin in the lead up to Russia's military action. In the hours after Putin ordered troops into eastern Ukraine on Monday, Trump said of the authoritarian leader, "This is

Donald Trump attacked President Joe Biden as 'physically and mentally challenged' at his South Carolina rally on Saturday night, tearing into the Democrat commander-in-chief's foreign policy in his first such event since Russia invaded Ukraine. He claimed Biden 'failed to deter Russia's outrageous invasion of Ukraine' and that Russian President Putin would never have attacked Ukraine during his presidency. Hundreds of Trump supporters gathered in a field near Florence Regional

What is the latest international news today?

Where is the US Russia summit?

Russia invaded Ukraine in 2014, occupies Crimea, controls armed forces in the Donbas, and has now amassed more than 100,000 troops on the border with Ukraine while President Putin threatens “retaliatory military-technical” measures if his demands are not met. More info : Does Russia currently occupy Crimea?

Who is Medvedchuk to Putin?

In Ukraine, Medvedchuk is considered an ally of Russian President Vladimir Putin. He has frequently been referred to as "a personal friend of Putin". The two first met in 2003, during Medvedchuk's tenure as Head of Ukraine's Presidential Administration. More info : Who is Medvedchuk to Putin?

When was william taylor ambassador to Ukraine?